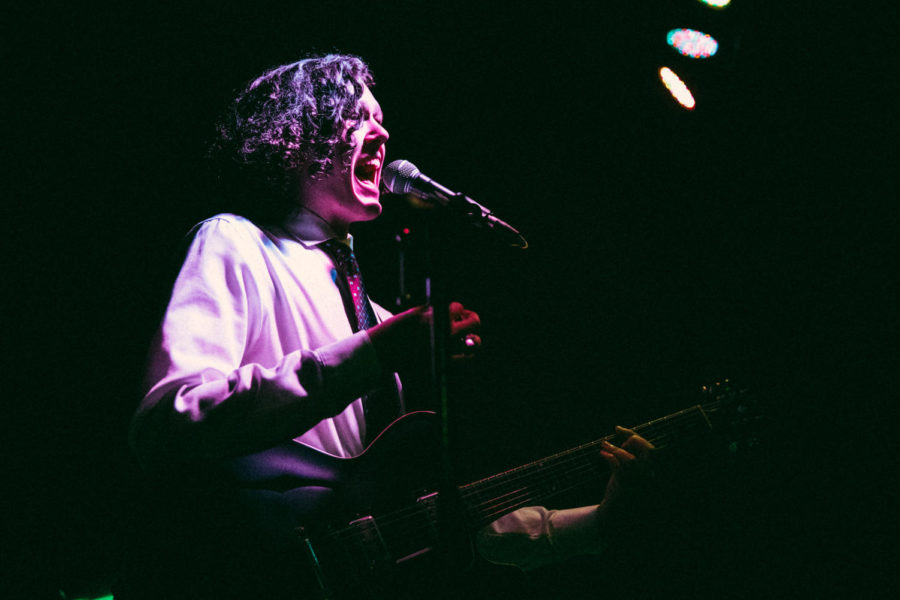 Alexander Hollins shows off his skills as both guitarist and vocalist of The Canarys. The Canarys are a a rock 'n' roll duo, so Hollins took the Gasa Gasa stage with drummer Marco Saah. Photo credit: Julia Santos

As summer comes to a close and longer, cooler nights approach, it’s back to business for Loyola sophomore bands Goblin Marquette, The Canarys and Colorblock. What better way is there to kick off fall than by denying the end of summer?

Goblin Marquette opened the show, and although it definitely was not their first rodeo, it was their first time playing at Gasa Gasa and their biggest show yet.

“This is definitely a next step,” Goblin Marquette vocalist Emilia DiFabrizio, music industry sophomore, said of their Gasa Gasa gig.

Practiced and perfected at an apartment turned studio above a warehouse, Goblin Marquette is a melting pot of sound. The band combines classic rock, jazz, punk, and popular musical training styles accentuated with poetic lyrics, creating an alternative-rock vibe with a dark, heavy mood.

The Canarys are another band of sophomores cultivated within the Loyola music scene. They performed second at The Denial Party.

Hollins describes the sound as “danceable.”

Colorblock brought the show to a close with their neo-soul, psychedelic waves.

Founded during their freshmen year, Colorblock sprang seemingly out of nowhere. They recorded two songs during their first jam session together, and they have been making music ever since.

Featuring five music industry students consisting of a bassist, two guitarists, a drummer and a vocalist and trumpeter, Colorblock aims to create a sound unlike any other.

“All our frustrations, all our wild thoughts that come to our minds, all our ideas that are too crazy and too out there, we just all want to put it into one song,” Sebastian Duzian,music industry sophomore, the band’s bassist, said.

The band draws from indie, new wave, and math-rock influences, and has a unique, experimental sound that fosters a community of musicians.

“Everyone’s a musician and they all use their instruments to contribute to the song as a whole,” Duzian said. “It’s like a communal thing, not centered around one person.”

The bands are just one aspect of concert experiences such as The Denial Party.

“One is not without the other,” said Saah, who agreed that a supportive crowd is crucial to making The Denial party a successful experience for both artists and the audience.

The bands expressed how a supportive crowd can make a show infinitely greater for everyone involved.

“We’re bringing it and we’re doing it but it does not happen without people giving their feedback and their response,” said Hollins.

A supportive community, like The Denial Party crowd, helps the bands grow, according to Duzian.

“The more people keep taking us seriously the more we take it seriously,” Duzian said.