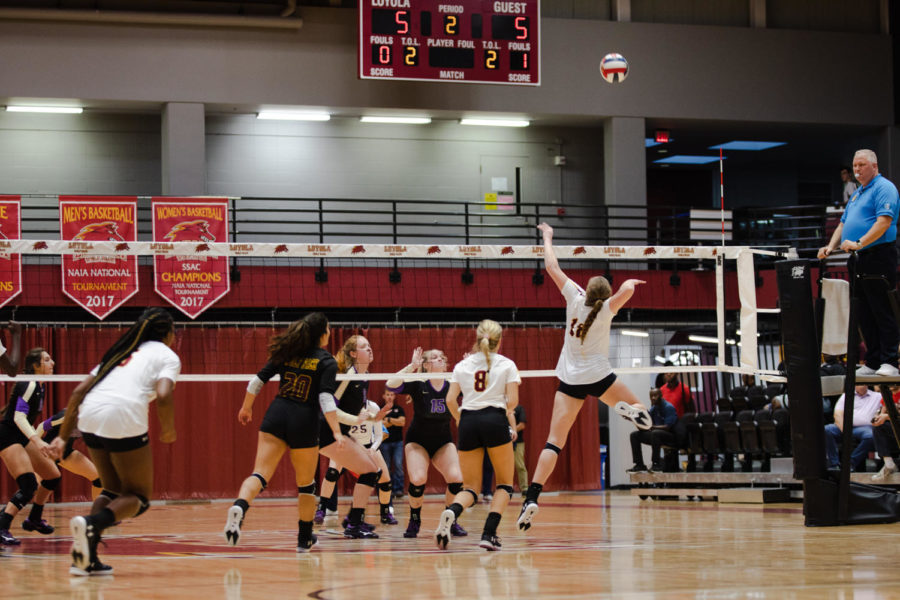 Psychology senior Malea Howie goes for a kill in the home opener against Bethel University. Howie finished with a career high of 17 kills against Mississippi College. Photo credit: Julia Santos

Loyola’s volleyball team captured their first home win on the year, defeating Mississippi College 3-2.The win followed a stretch where the Wolf Pack had lost seven of their eight games.
The Wolf Pack started strong taking closely contested first set 28-26. The Choctaws rebounded taking the next to sets 25-17 and 25-16. Loyola took the fourth set 25-19 to force a fifth set. The Wolf Pack sealed the game taking the fifth set 15-7.

“It allows us to move on from the losing streak, get our first home win, and start the second half of conference play on a positive note,” Zabal said according to the athletic department.

Education senior Maddie Huekels recorded a season-high 30 assists as well as four service aces which put her at a conference-best 48 service aces. Those four aces also put her at the eighth most career service aces at Loyola with 175.

The Wolf Pack will attempt to defend The Den again against Middle Georgia State University Oct. 13.