NOLA Nightmare rises from the grave of House of Shock 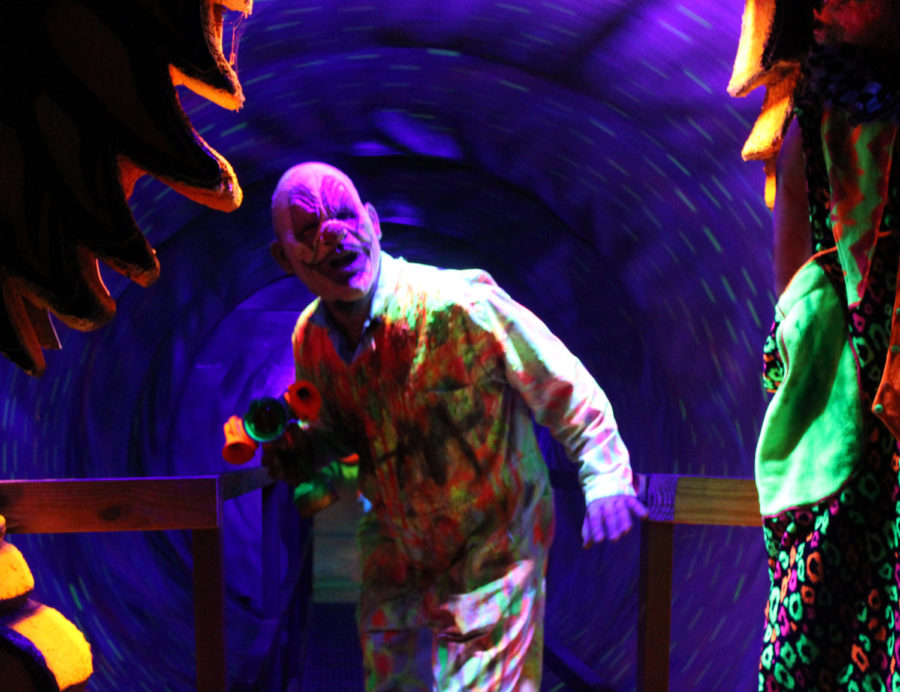 The spinning 3D tunnel serves as the clown room at NOLA Nightmare. Guests were frightened by live-actors and special effects throughout the haunted house. Photo credit: Caitlyn Reisgen

On the same grounds under the Huey P. Long Bridge, where the House of Shock terrified visitors for years, the new haunted house, New Orleans Nightmare, debuted this year.

This unique haunted house is owned by the 13th Floor Entertainment Group, who also owns other haunts across the United States. These new owners transformed the haunted house with new frightening rooms, special effects and trained actors meant to thrill guests.

Upon entrance to the grounds, guests are immediately met with actors who lurk around the entrance to give a small taste of the scares to come once they enter the haunted house.

Unlike the previous years, where there were stage acts, these shows were replaced with a new attraction that New Orleans Nightmare offers which are three mini escape rooms, where guests’ minds are put to the test as they have five minutes to escape the room. For those who fright easily, these escape rooms cost $5 and are less intimidating than other attractions.

Sydney Gordon, psychology sophomore, is an actor who has been scaring guests at this location for years. When speaking about her time working at New Orleans Nightmare, she said, “New Orleans Nightmare has not even finished a whole season yet, and we have already been added as number eight in the top haunted houses in the country. I have been working at this location for six years. I love every second of what I do here.”

In place of the previous controversial Satanic themes that the House of Shock boasted, this haunt brings various fears to life accompanied by many jump-scares to keep visitors on their toes.

Some of the features of this new haunted house include a 3D clown-themed room, where guests are given glasses to see the 3D paintings on the walls by a graffiti artist, a laser swamp that looks and almost feels like guests are walking through a swamp and many gory and realistic props. This attraction is not recommended for children under 12, pregnant women and people who experience epilepsy, asthma and heart issues.

Additionally, after Halloween on Nov. 2nd and 3rd, New Orleans Nightmare will feature a special event called “Blackout,” where visitors can experience the haunted house in complete darkness with the only source of light being a flashlight.

Another actor, Cameron Brosonski, has been working at this location since he was young alongside his father.

“My dad and I have been working at this place since it was the House of Shock. For me, that’s at least 13 years of spending my Halloweens at this haunted house, and I have a lot of fun doing it,” he said. “When the 13th Floor took over as owners, a lot has changed at this haunted house for the better, and I’m looking forward to what they have planned for the years to come.”