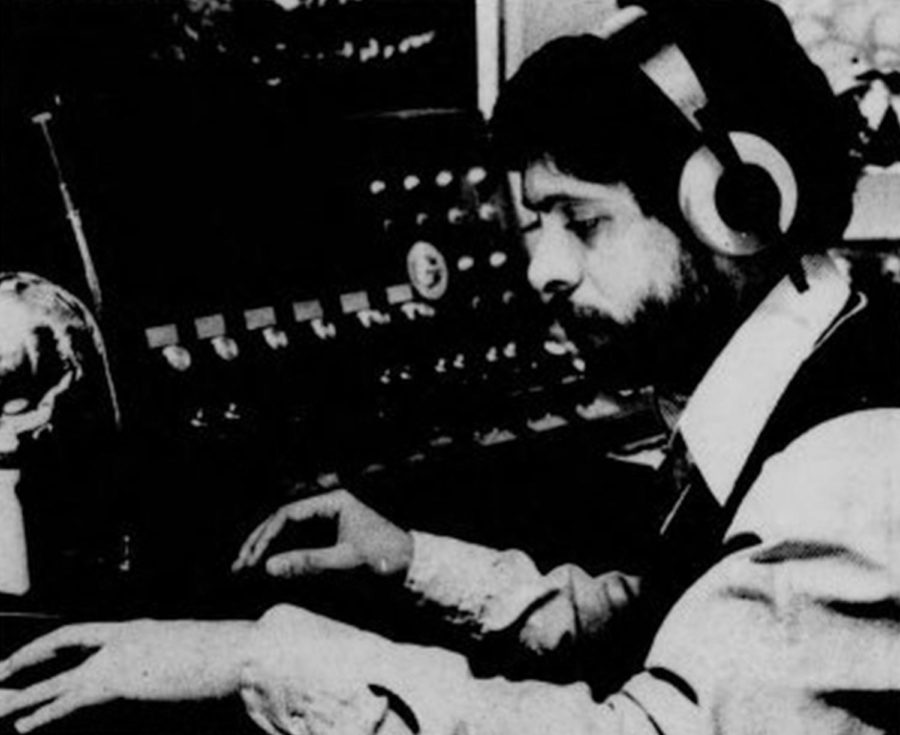 You are surrounded by bubbles and fog. Rays of blinking light and pulsating sound shoot past your head. Laser beams are whining back and forth. You are spinning on a twirling platform amidst throbbing projections. You‘re not dreaming, you‘re in a discotheque.

Discos, night clubs that play records for dancing instead of having live music, are the latest trend in entertainment. They have become a worldwide phenomena and a billion dollar industry.

Even in New Orleans, the birthplace of jazz, discos are booming. Every night of the week hundreds of couples dressed in the latest fashions can be found in the local discos, gyrating to the pulsating beat blaring from the speakers.

There are already over 25 in the New Orleans area. Several of these – Georgie Porgie’s, the Rainforest and the Civic Theater – opened in the past four months. Plans are on the drawing boards for more.

New Orleans’ discos are spread fairly evenly throughout town. They range in style from the Hilton Hotel’s posh Rain- forest, where drinks are $2.50, to Buffalo’s, which barely qualifies as a disco because of its rustic atmosphere and varied music.

“Dance with me and I’ll dance with you.

Dancing is the brand new thing to do,

I‘m too young and you‘re too old,

But that don ‘t mean that you got no soul.

The rich can dance and so can the poor,

You can dance until you‘re ninety-four.”

Everyone seems to be getting into the disco craze. It isn’t confined to any age, race or social class. Its clientele ranges from blue-collar workers to the jet set.

Discos also vary in location, size and their cover charges. They can be found in ghettos as well as prominent areas, and are in both large cities and small towns. There are mobile discos that go wherever their services are needed, and there’s even a disco in one of Chicago’s most exclusive nursing homes.

In size, discos vary from those with tiny, makeshift dance areas to some of the larger New York City discos like Inﬁnity, where every weekend throngs of glittery Manhattanites pack the block-long dance floor.

Cover charges also vary widely. According to a survey by Billboard magazine, over 50 percent of the discos in the U.S. don’t charge admission, and only 11 percent require their customers to purchase a minimum number of drinks.

On the other end of the scale is Les Mouches, a private New York City disco for the high-fashion set.

At Les Mouches, music pours out of an elaborate sound system onto a huge dance ﬂoor surrounded with mirrors. The disco contains several bars, a posh restaurant and a cabaret, and also shows silent movies. But, you pay for what you get. Non-members must shell out $20 just to walk in. Members, who pay $75 a year, pay $5.

“Let’s go to the disco cause I feel like dancing tonight,

Go to the Disco Let‘s go to the disco where the music is always bright,

Put on your dancing shoes,

Tonight we’re gonna dance away all our blues.”

America is throwing its head back and laughing, looking away from the nation’s problems that people of the ’60s dwelt on. The younger generation is busy keeping up with the latest dances instead of staging protests like their counterparts of the ’60s.

Psychologists say the reason for the disco popularity is that the country is in a period of optimism and nostalgia.

Another cause attributed to the rising popularity is the declining economy. Since discos play records, they don’t have to pay for live entertainment, so their prices are generally much lower than nightclubs with performers.

“People are getting into dressing up again. They work hard all week washing cars and busing tables, but they‘ll spend every cent they make on an outﬁt to wear to the discos,” says Pugeau.

“Musicians used to be the main attraction at nightclubs, but now it’s the place and the people.”

Commenting on some of the bizarre clothes worn by disco-goers, Pugeau says, “You can sit here and see a show just by watching people come through the door.”

“Friday night and the lights are low,

Looking out for a place to go,

Where they play the right music,

Getting in the swing,

You come to look for a king.”

Even though the music is too loud for a lot of conversation, one of the main reasons people go to discos is to “cruise,” a word used in discos which means to pick up someone for sex.

In nightclubs with performers, people are generally sitting at their tables, listening to the music. In discos, it’s a different story.

Since dancing is the main purpose of discos, many don’t have any chairs or tables so there’s a lot of mingling and rubbing up against one another in the crowded areas near the bar and dance ﬂoor. This has led to calling the section of discos near the bar the “stand-and- stare area.”

For those too shy to walk up and talk to someone, there’s a new disco invention called Love Phones. The closed-circuit phones are placed in seating areas throughout the discos. If a guy sees a girl he’d like to meet, he can pick up a phone and call her table to see if she‘s available. It’s that simple.

“Dancing the night away,

Oh what a joy at the Barefoot Boy,

The club remains the place to be,

I guess you can come in your jeans.”

This disco hit (by the Andrea True Connection), “New York, You Got Me Dancing,” reﬂects another aspect of the disco scene: the gay discos. (Barefoot Boy and 12 West are gay discos in New York City.)

Billboard says that over 50 percent of the discos in the U.S. are predominantly gay. There are over 100 gay discos in New York City alone. The magazine also says that although many people think discos were started by blacks, they have been a primary part of gay life for the last ten years.

It seems that as attitudes towards gays eased, “straights” started going to gay discos, liked what they saw, and it spread from there.

In New Orleans, there are two gay discos: the Parade and Le Bistro. Located on Bourbon Street, they are two of the largest discos in town, housing large dance ﬂoors, wild light shows and intricate sound systems. New Orleans magazine gave the Parade the coveted “Best Disco in Town” rating.

“Shake it up, shake it down,

Move it in, move it ’round, disco lady.”

“Disco music has become more popular and successful than the Beatles ever were,” reports Billboard.

‘l‘he disco movement began its invasion on radio in 1973 with the back-to-back number-one singles “Rock the Boat” and “Rock Your Baby.” Since then, disco has dominated the record industry.

In 1976, when disco began heavy inﬁltration of radio airwaves, 15 of the 20 number-one singles were disco- oriented, and the largest-selling single was “Disco Lady.” The trend is continuing.

“Saturday night and all alone,

No one at home, no one to phone,

In 1975, Mayor Abe Beame of New York crowned Gloria Gaynor, who sings “Never Can Say Goodbye,” as the ﬁrst official Queen of the Discos. But the new disco favorite is Donna Summer, who has had hits with “Love to Love You Baby” and “I Feel Love.” Her appeal to the disco set is so strong that all of her albums sell well over a million copies, regardless of whether they receive radio airplay.

Other popular disco artists are KC and the Sunshine Band, Barry White, the Trammps, Cerrone and the Ritchie Family.

Besides making superstars out of new disco artists, discos have also brought popularity back to many singers and old songs.

The Bee Gees have staged a successful comeback with “Jive Talking,” “You Should Be Dancing,” and “Staying Alive,” all number-one singles. Frankie Valli and The Four Seasons have scored with “Who Loves You” and “December 1963 (Oh What a Night).” Disco has also brought David Bowie million-selling records, and yes, fame.

Just a few of the old classics that have returned to the charts with added disco beats are “Brazil,” “Tangerine,” “That Old Black Magic” and “Babyface.”

And they’re just dancing along,

To a brand new song,

Down at the disco.”

When the disco craze ﬁrst started, many people thought it was just a passing fad. Four years later, it’s a billion dollar industry.

Machines that blow fog and bubbles, dance ﬂoors that rotate or shake, and a wide range of lighting effects have been invented for disco use. Even special laser beams have been developed for discos.

The future seems very promising. The number of discos is increasing rapidly. More and more recording artists are jumping on the bandwagon and saturating the market with disco music. A magazine called Disco World has recently hit the newsstands, and disco has begun its impact on the movie industry with “Saturday Night Fever” starring John Travolta. Another disco movie, “Thank God It‘s Friday,” starring Donna Summer, is on its way.

Even the American vocabulary hasn’t gone untouched. “Hustle” no longer means to hurry, “bump” is no longer an unsmooth surface, and there’s even a new word for a back that’s ailing from too much dancing: it’s called slipped-disco.

It definitely looks like the “in” place in American entertainment for the next several years will be the disco. After all, “it’s where the happy people go.”