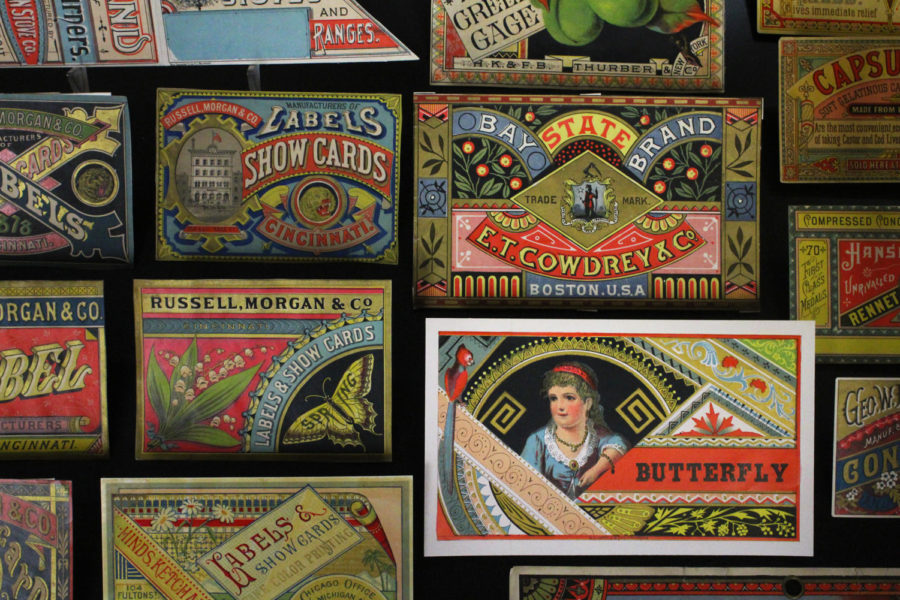 An assortment of brightly colored trading cards are displayed in the Booth-Bricker Reading Room. Kitchens' collection will be on display until the end of the fall semester. Photo credit: Gracie Wise

Keeping a collection can be an enjoyable hobby for anyone. From beautiful postcards to vintage Coca-Cola bottles, the possibilities of collectibles are endless. But one Loyola professor collects an assortment of trade cards from the 19th century, and he’s sharing it with the university.

Printmaking professor William “Bill” Kitchens, with the help of art history professor Benjamin Benus, organized the Artistic Printing in the 19th Century exhibit of the Booth-Bricker Reading Room, which is located on the third floor of Monroe Library.

The exhibit features things such as the history of the lithographic and letterpress process, examples of printmaking designs in history and the earliest printing apparatuses and Kitchens’ own collection of trade cards.

Kitchens wants his students to see the quality of the work.

“It’s difficult to comprehend the quality and beauty of all this color unless you’re comparing it directly to contemporary color works such as process color.”

Kitchens started off as a kid collecting insects, coins and World War II military memorabilia. But, his fascination with 19th century trade show cards began while Kitchens was studying as an undergraduate at Virginia Commonwealth University in Richmond to be a painter. When he enrolled at the University of Georgia as a graduate, he fell in love with printmaking where he trained as a lithographer and Intaglio printer.

“There was a lot of industry there, a lot of the trade cards and a lot of those elements,” Kitchens said. “From the industries, it grew up there.”

For a while, his interest in trade cards dwindled until he stumbled upon eBay six years later.

“It made all of this accessible,” Kitchens said of the exhibit.

Now, Kitchens has been making prints for 45 years. He’s done screen-printing commercially, but has begun to focus more on his own private collection.

“I’d rather be working on my own work,” Kitchens said.

Although Kitchens still loves other art forms such as painting and drawing, there is an indirectness of printmaking that draws him to it.

“It’s this sort of working on this matrix that doesn’t look like anything like what you’re going to end up with,” Kitchens said. “It’s sort of like coming in the back door to get into the foyer or front foyer kind of like.”

The exhibit will be open from 9-12 p.m. on Tuesdays and 1-4 p.m. on Thursdays until the end of the fall semester.

“I want my students to see what the possibilities are,” Kitchens said.