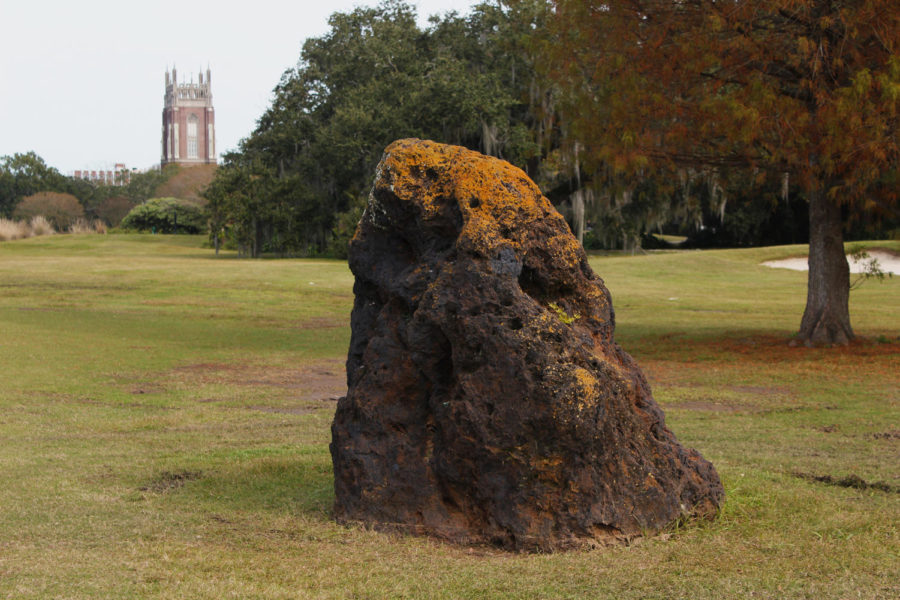 This iron ore rock in the Audobon Park Golf Course, commonly mistaken as a meteorite, is only survivng remant of the New Orleans's World Cotton Centennial. Photo credit: Cristian Orellana

Though many people walk through the Audubon Park and Zoo, few may know that it was once the host of a world’s fair called the World Cotton Centennial in 1884.

The fair was hosted with the intentions of promoting the city and all it had to offer. To host this event, buildings were made onto what would later become Audubon Park and Zoo.

“At the time, it’s just an open field that they do a lot of landscaping to build these buildings which, of course, none of them exist today,” according to Justin Nystrom, Loyola history professor.

The fair was suggested by the National Cotton Planters Association to help the state recover financially in the aftermath of the Civil War. Along with financial interests, the fair was also seen as a way to keep New Orleans from continuing to fall in its’ position as one of the primary cities in the country.

“It falls not so much because it’s not growing but because places like Cincinnati, Cleveland, Chicago and Indianapolis were starting to grow out of nowhere,” Nystrom said.

The World Cotton Centennial would eventually open up on Dec. 16, 1884, two weeks behind schedule. Crossing from St. Charles Avenue to the Mississippi River, the fair took up 249 acres. The fair had a host of different exhibits from states like Alabama and countries like Jamaica and Mexico.

The Mexico exhibit was one of the more popular attractions showing off everything including tropical shrubs and a small pyramid made up of minerals among other things, according to the New Orleans: Gateway to the Americas website.

However, the centennial wasn’t the financial success that many were hoping for. Though the event was popular, it didn’t make back the money it cost to host it. Additionally, there was trouble behind the scenes thanks to then-State Treasurer of Louisiana Edward A. Burke.

Burke, as described by Nystrom, was a corrupt politician who had a part in helping set up the centennial. To get the support, Burke convinced congressional district member E. John Ellis into giving federal help despite his knowing of the corruption. Burke would eventually flee the United States with millions of dollars and head to Centennial-featured country Honduras, where he would live until his death in 1928.

“(Ellis) kind of holds his nose and lends support in the House of Representatives so that the federal government will fund it, knowing that Burke will end up stealing some of the money, but he believes it is going to be good for the city,” Nystrom said.

Due to this misfortunes, another world’s fair wouldn’t take place in New Orleans until the 1984 Louisiana World Exposition, nearly 100 years later. However, the 1984 World’s Fair would be the last to take place in the United States.

Nystrom believes that this was due to the idea of a world’s fair was a product of the past. “It was an idea that well outlived its utility,” he said.

However, despite all the setbacks, the Cotton Centennial provided that New Orleans was, and still is, growing to be the best.

“If you were a city of any consequence, you hosted something like this,” Nystrom said.