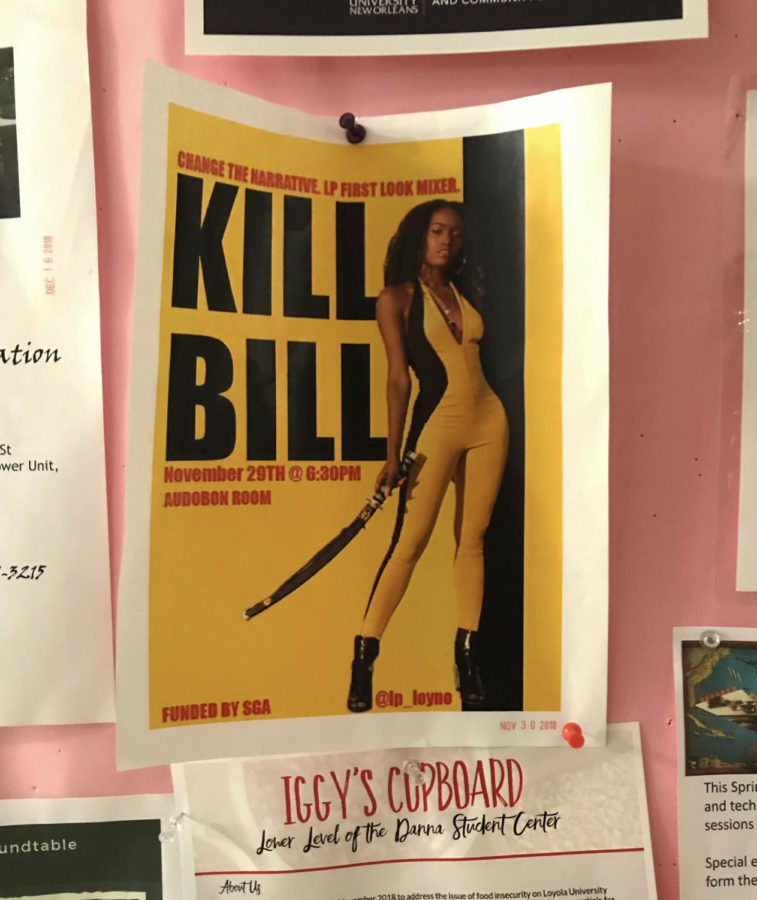 A Kill Bill-inspired poster used to promote the Lemon Pepper mixer. This poster was a part of their “Change the Narrative” campaign. Photo credit: Rose Wagner

Lemon Pepper isn’t just a zesty seasoning, and according to Zontre City, digital filmmaking sophomore, it’s not a band or movie either. Lemon Pepper, he said, is a movement.

Lemon Pepper is one of Loyola’s newest student organizations. Though it shares members with Loyola’s Black Student Union, Student Government Association, PLUS+ and other organizations concerned with the creation of safe spaces, Lemon Pepper’s mission is different. The club is setting its sights on life after Loyola, focusing on how marginalized individuals can navigate noninclusive social, professional and political spaces.

“We know that safe spaces alone are not enough to prepare you for the real world,” said City, Lemon Pepper’s president. “So we wanted an organization that prepares students for the real world. In particular, minority, marginalized, progressive students.”

“We actually began last year having lemon pepper networking nights with our friend group and we would invite other people who we met in classes,” City said. “We realized that in those networking nights the things that we would talk about was life after Loyola. We knew that Loyola was great. It was friendly. It was inclusive. But we really needed to make sure we were prepared for what was to come.”

It was through those networking nights that Lemon Pepper was born. Though Sikudhani Foster-Mccray, management sophomore and a member of Lemon Pepper’s executive board, said the creation of the organization has not been an easy process.

“We started assigning roles and coming up with the concept earlier this year, and it actually was kind of an uphill battle for us as we went through the chartering process,” Foster-Mccray said. “We are still definitely working through things with our members and our roles.”

Despite the lengthy process of creating Lemon Pepper, Foster-Mccray said the organization is moving toward inducting members. She added that events like their Nov. 27 mixer and this semester’s “Change the Narrative” campaign— in which members of Lemon Pepper recreated cult movie posters using students of color—have them excited for what is to come.

“They are seen as classics in American society, but the thing that we saw was that most of the characters were white middle Americans,” Foster-Mccray said of the poster campaign. “We wanted to change that narrative. We wanted to raise that bar and put out there an image that is not always in the media. We wanted people to see that they could be in those positions.”

It was the use of these posters that grabbed the attention of students and over 100 mixer attendees. However, despite the posters’ focus on black students, City and Foster-Mccray said Lemon Pepper is about supporting all marginalized groups and that they are eager to collaborate with organizations like the Hispanic Music Appreciation club.

“LP is not looking for one particular type of person,” Foster-Mccray said. “We’re just looking for motivated creative individuals who want to raise the bar.”