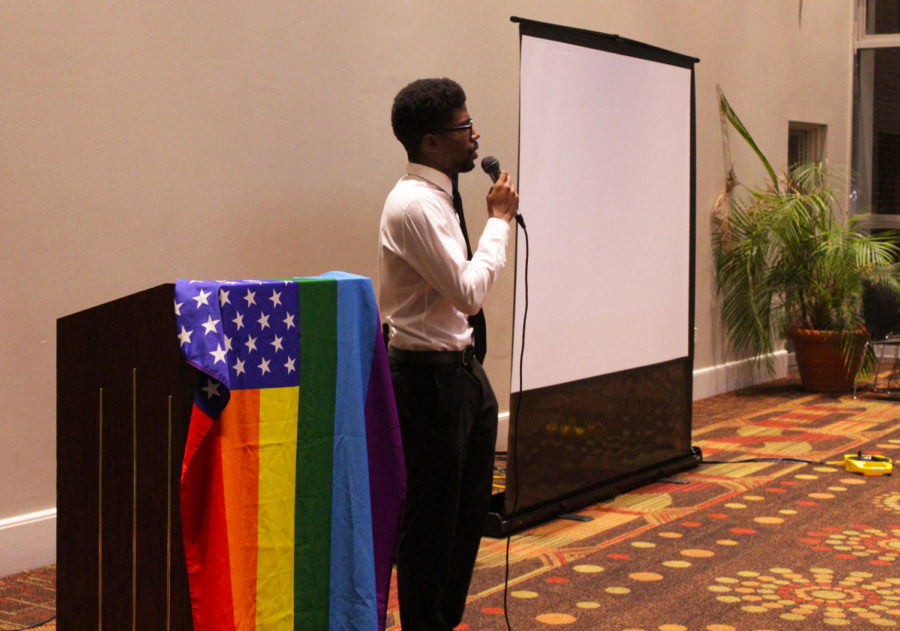 Barry D. McGuire performs a spoken word poem about the difficulties of being a black man in the LGBTQ community at Loyola’s World AIDS Day Cocktail Party on Dec. 1. The event was hosted by Delta Sigma Theta and Loyola’s newly formed LGBTQ organization, Plus+. Photo credit: Hannah Renton

Dancing and a cappella aren’t typically associated with a cocktail hour, but for PLUS+ president David-Michael Collins, that is the only way to put on a fun, yet informative event about AIDS awareness.

The second World AIDS Day Cocktail Party at Loyola was held on Dec. 1, but it was the first year PLUS+ was involved.

“This is an event that the Nu Mu Citywide Chapter of Delta Sigma Theta usually hosts, but PLUS+ wanted to hold an event for World AIDS Day as well. So instead of having two separate events, we decided to come together for one big event,” Collins explained.

The Saint Charles Room was transformed into an elegant ballroom with decadent gold centerpieces and large sequin tablecloths. Student attendees paid $10 for tickets, the proceeds of which went to Belle Reve New Orleans, an assisted living facility for individuals living with disabilities and HIV/AIDS.

As guests arrived one by one, they were greeted with smooth jazz and a delicious buffet. The night began with thanks to all sponsors of the event and then a program full of performances, and ended with attendees breaking it down on the dance floor.

POCapella, an a capella group of students of color from Tulane, got people’s feet moving and hands clapping with renditions of “Finesse” and “Killing Me Softly.” This was followed by a spoken word performance from Barry D. McGuire, in which he discussed the hardships of being a black man within the LGBTQ community.

The combination of Loyola student organizations, and Tulane and New Orleans community members participating in the event represented a sense of togetherness in the fight against AIDS.

Shamaria Bell, general studies freshman and member of PLUS+, expressed this sense of solidarity during the event.

“It’s a huge disease that doesn’t get a spotlight often enough, so I thought coming to the event would help bring awareness and action,” Bell said.

“I love the fact that this event is bringing awareness to AIDS. We need more events like this in our community to educate people on how to protect themselves,” Gaston said.

Collins said his goal for the event was to empower attendees and encourage them to learn about AIDS and HIV.

“A big part of our mission statement is to educate individuals on different topics and problems within the LGBTQIA community. HIV/AIDS awareness is one of the biggest topics in the community, which is why this event and events like these are important to PLUS+,” Collins said.

While honest conversations about AIDS can often still be considered taboo, according to Collins, he believes the only way to break that stigma is by working through that discomfort and bringing the issue to the forefront of conversations.

“I think we need to normalize discussions about AIDS. As we know, this is a taboo subject, but it shouldn’t be because so many people suffer with it everyday. We need to make sure people know about it and know the right language and tools to use when discussing it,” Collins said.