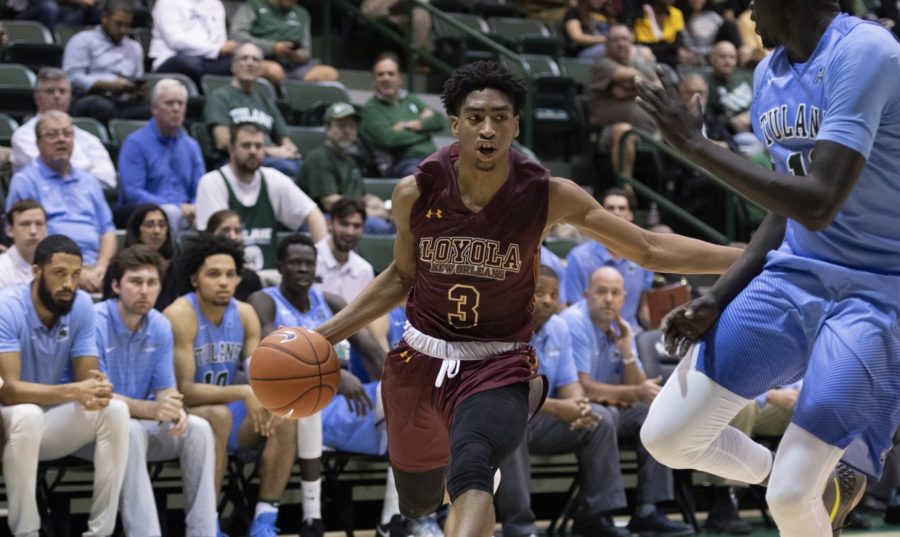 Mass communication freshman Myles Burns was the standout player for the Wolf Pack. Burns led the team in points, with 28, and rebounds, with 15, which also was a career-high. Photo credit: Loyola New Orleans Athletics

It was David versus Goliath in the first match up of the new year. Loyola’s men’s basketball team was David, sitting at the No. 8 spot in the Southern States Athletic Conference. Goliath was Stillman College, with a men’s basketball squad that sports an overall undefeated record and the top spot in the conference.

In this match up on Jan. 3, David nearly won over Goliath, sending the conference’s best team into overtime in front of a home crowd. However, Loyola couldn’t contain the giant as Stillman won in overtime, 110-108.

Loyola came out hot to start, racking up 53 points in the first half, compared to the Tiger’s 47, but the Wolf Pack could not get ahead in the second half, sending the game into extra minutes. In a close contest, Loyola scored eight points in overtime while Stillman racked up 10, retaining their perfect record.

Loyola’s 108 points marks the third time this season where the team scored over 100 points. Loyola averages 91.9 points per game, ranking 11th in the nation in the category.

Mass communication freshman Myles Burns was the standout player for the Wolf Pack. Burns led the team in points, with 28, and rebounds, with 15, which also was a career-high. His five steals increased his average to 3.08 per game, the nation’s highest average in the category. Burns also finished the game with three assists and two blocks.

Loyola now has an overall record of 7-5 and a conference record of 2-3.

They will face off against the University of Mobile on Jan. 5 in The Den at 4 p.m.