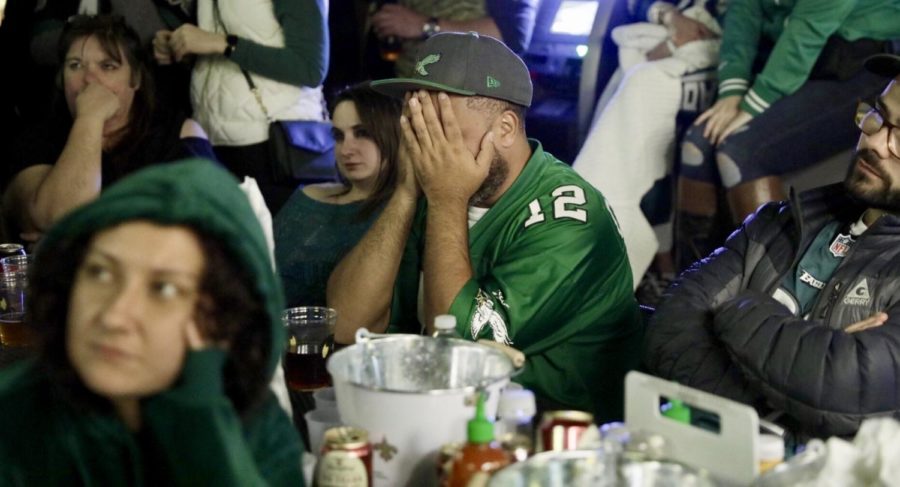 It was a cold afternoon in a city that bleeds black and gold. “Who Dat” chants echoed across the metro area. Rumblings from the Super Dome could have been felt on the Richter scale. And the smell of king cake, gumbo and Cajun cooking fogged the air.

It was the perfect habitat for a New Orleans Saints fan, but Uptown on Freret Street, Philadelphia Eagles fans from across the Crescent City huddled inside Liberty Cheesesteaks.

Eagles fans packed the sandwich shop to watch the National Football Conference’s divisional playoff game against the Saints. Midnight green covered the restaurant’s walls, “E-A-G-L-E-S” chants could be heard from the street and Yuengling flowed like the Delaware River.

Philadelphia’s hopes of another Super Bowl visit were on the line, and it seemed there was no better way to cheer on Sunday’s underdog than with cheesesteak and camaraderie.

@Eagles erupt in cheers as Drew Bress is sacked on third down @WWLTV pic.twitter.com/qk7L3MmkyJ

The unofficial Eagles bar erupted after every Nick Foles pass or Eagles first down, attracting football fans wanting to avoid the Who Dat noise. Tulane University junior Catie Cullen visited Liberty Cheesesteak Sunday for exactly that reason, as she preferred to avoid Saints fans at Bruno’s Tavern and other Uptown bars.

“This is the first time I have come to a game here,” Cullen said. “It ended up being great.”

Though few and far between, Saints fan did make an appearance at the Uptown eatery. New Orleans native Will Drew said he heard about Liberty Cheesesteaks from a co-worker who told him the restaurant had the “best cheesesteaks in town.” The 28-year-old showed up Sunday decked out in Saints gear and ready to talk smack.

“I like to be deep in that water,” Drew said. “I think I might be the only [Saints fan] here right now.”

But Drew wasn’t the only home-team fan there for Sunday’s game.

“Right when you walk in you automatically see a sea of green, but usually it is very friendly and comforting,” said Gayton Procell, Liberty Cheesesteaks crew member. “The Eagles fans are prideful in what they believe, just like us Saints fans. They cheer their team on from here. You know when you are out there, you are out on the streets on New Orleans, but then you walk in here, and you are in Philadelphia getting a cheesesteak. I think that is how the owner tries to keep it — just a small slice of Philly.”

@Saints score late in the second quarter bring the game to one score against the @Eagles @WWLTV pic.twitter.com/bgBFvttFiT

The Saints won Sunday’s game, 20-14, ending the Eagles’ hope for back-to-back national championships. With the Eagles out of the mix, Casey assures New Orleanians that fleur-de-lis caps and black and gold jerseys are welcome during the Saints title run.