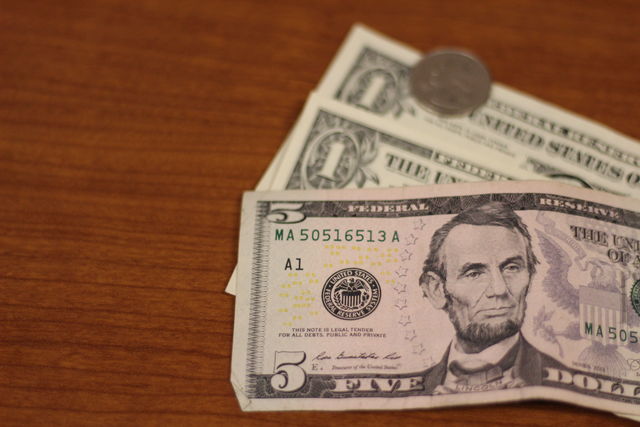 The national minimum wage, $7.25, lays on a table. Louisiana Gov. John Bel Edwards hopes to increase the minimum wage by the year 2021.

An extra $1.25 an hour may not seem like a lot, but for a college student working 40 hours a week to pay the bills, it adds up.

That’s what an average week looks like for Cecil Johnson, a theatre senior at Loyola University. She’s one of the many people who would benefit from Governor John Bel Edward’s plan to raise the state minimum wage from $7.25 to $8.50 an hour by 2021.

“When I first got my job, I was working for minimum wage about 40 hours a week,” said Johnson. “I was miserable and exhausted and I kept getting my paycheck and going ‘damn, I’ve gotta work more hours still just to pay my electric bill.’”

She said that the current minimum wage feels like “a lot of work for not a lot of compensation.”

“Knocking it up to eight would help, personally I think we could go a little higher, but right now it’s just not enough,” she said.

Though the increase might help Johnson pay her bills, economics professor Walter Block said that raising the minimum wage is a step in the wrong direction.

Block said that raising the wage will only make it harder for people at “lower productivity” rates to get a job, as businesses will have to hire people that are worth paying the increased hourly wage.

“At whatever level it is, people whose productivity is below that will be unemployed. It forbids them to work. How does that help them?” he said. “I think forbidding other people to work is a crime. I think that people who support the minimum wage law are criminals.”

However, Dr. Sylvia Allegretto, a labor economist with the Center on Wage and Employment Dynamics at the University of California, Berkeley, said that in her research, she hasn’t seen any negative unemployment effects of raising the minimum wage modestly. In fact, she said her research shows the opposite.

“It’s costly to keep recruiting and re-training workers,” said Allegretto. “When minimum wages are so low, workers are going to be leaving jobs to bid up their wages. When workers are paid more, turnover rates actually decline.”

Allegretto also said that, instead of disenfranchising the unskilled worker, wage floors help to empower them. She said that giving the working class higher wages gives them more bargaining power, helping to reduce inequality.

“Setting wage floors has become the policy mechanism to put money into the hands of the people. There are significant problems when you have wages that are so low.” she said.

Researchers may have to wait to see how this change might affect the workers of Louisiana, however. Loyola political science professor Sean Cain said he thinks that the governor has his work cut out for him when it comes to getting the minimum wage increased. With much of Louisiana’s government being controlled by the Republican party, Edwards doesn’t have a lot of political support.

“It depends on the state, but it’s become a fairly partisan issue here.” said Cain. “ I think it would require him to win more Democrats to get elected into the state house.”

Even if Edwards does find the political support, raising the minimum wage isn’t going to be as easy as changing a state law. It would involve creating one.

“Louisiana doesn’t actually have a minimum wage law, and when a state doesn’t have that it reverts back to the national law,” said Cain.

According to Cain, the pressure on the state generally comes from organized workers unable to pay the cost of living. However, he said that one of the factors that often bolsters these movements is the backing of the business community. If the cost of living is high and the economy is good, the business community is often more willing to support the cause. Louisiana workers may not find that same support.

“As a poor state, business becomes more hesitant to support a minimum wage increase because of the fear that it will cut into their profit margins,” said Cain.

According to Allegretto, instead of seeing a decline in profits, local businesses might see a boost.

“You’re going to have all of these workers getting a boost in pay. That means they’re all going to be going to the coffee shop more. They might be buying pizza more when they didn’t used to,” she said. “It creates its own bit of stimulus.”

Whether or not the governor can convince his critics of this will be seen soon. Edwards has said that his goal is to see the wage increased to $8 by next year, and to $8.50 by the year 2021.