Democrats double down for 2020 election 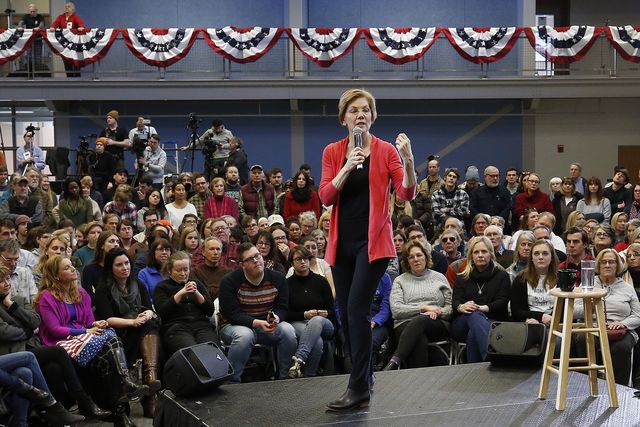 Although 2019 has only been in swing for several weeks, the new year has acted as a catalyst for Democrats across the country looking to the 2020 presidential elections with hope.

For months, names of prominent Democratic leaders have been thrown around as potential candidates. Official announcements of presidential bids have begun trickling out beginning with Elizabeth Warren, a Massachusetts senator who has held her seat since 2013.

In a video posted to Warren’s campaign website, the senator emphasized her belief that the American middle class is “under attack.” She also believes in raising the federal minimum wage, restrictions on the purchasing of firearms and a more secular national government, according to isidewith.com.

However, it is Warren’s economic ideologies that set her apart from the crowd, according to political science professor Sean Cain.

“Her progressiveness emphasizes economic issues, other progressives emphasize social issues,” Cain said. “They’ll focus on same sex issues, or the pro-choice issues. But, she focuses on economics appealing to the working and middle class people.”

An overall look at Warren’s various stances shows that her ideology is that of a left-wing democrat.

Warren herself has been a target of President Donald Trump’s infamous political name calling. He has regularly referred to her as “Pocahontas,” citing Warren’s public claim of a distant Native American ancestry. Cain believes it may be this controversy that caused Warren to announce her bid so early.

“I know there were questions about Elizabeth Warren and the “Pocahontas” controversy,” Cain said. “I think she perhaps felt she needed to get beyond that and jump into the race sooner rather than later.”

Julián Castro was the next name to emerge as an official candidate for presidency. Should Castro win the presidency, the former San Antonio mayor and secretary of Housing and Urban Development, would be the first Latino voted into Presidential office.

Castro has been building momentum in the party since delivering the keynote speech for Barack Obama during the 2012 Democratic National Convention. At 44-years-old, he represents the younger generation of breakout Democrats that have been cultivating youthful excitement in the party.

For Dylan Ritter, president of the Loyola College Democrats, the young Democrats emerging onto the national stage are where he sees the party finding success.

“Democrats need an anti-establishment politician,” Ritter said. “Not in the sense that they aren’t politicians, but in that they haven’t been around for that long. I’m looking to the younger guys.”

Compared to the “Biden’s and Sanders’,” Ritter believes that the younger democrats will draw in younger voters who are excited about politics in new ways, as well as the non-voters who he believes are imperative for a Democrat win.

Castro wouldn’t be alone in Washington either. His twin brother, Joaquin Castro, is a congressman representing half of San Antonio and several of its suburbs in the House of Representatives. Together, the brothers have accumulated political clout among Southern Texans, especially those of Latino backgrounds. That recognition will be an aid for Castro, according to Cain.

“I think the likes of Julian Castro, who has support among the Hispanics in Texas is a good place to start,” Cain said. “It’s a big state, and potentially a swing state. Part of his reason for running early is to improve his name recognition both amongst hispanics outside of his home state, but also non-hispanics in places like Iowa and the Midwest.”

Because he has not served as a senator or congressman, Castro’s ideological stances on hot-button issues are not as well known as Warren’s.

Most recently announced, Rep. Tulsi Gabbard, a Democrat from Hawaii, has joined what is sure to be a large and tumultuous pool of candidates vying for the party endorsement. Like Castro, Gabbard is young, only 37-years-old.

Gabbard is a veteran, and has gained allies in several Republicans after publicly criticizing the Obama administration’s foreign policy actions.

Like Castro, Gabbard will have to accumulate national name recognition to make a legitimate stab at the democratic endorsement.

For Ritter, former Texas congressman Beto O’Rourke is who he hopes to see on the ballot. California senator Kamala Harris is another viable option. O’Rourke, age 46, and Harris, age 54, identify with the younger Democrats Ritter leans towards.

Both agree that Warren, Castro and Gabbard are only the beginning of what is sure to be a massive wave of Democrats pulling for the presidency.