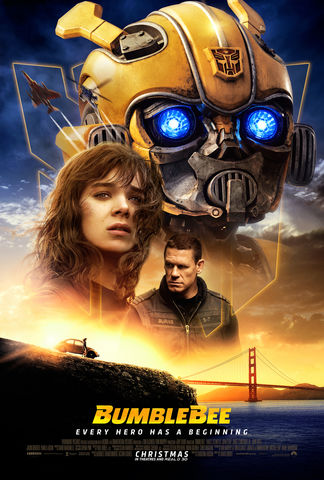 I am the only person I know who actually liked the Michael Bay directed Transformers movies. So much so, that its become a running gag amongst my friends. I have seen every Transformers movie multiple times and can name numerous Transformers. I’m not quite sure what it is, but Transformers has been one of those things I still love that has carried over since childhood.

“Bumblebee” is a much smaller-scoped movie than I initially thought it would be. “Bumblebee” is not the stereotypical Transformers movie filled with CGI battle fests. It instead is a prequel about how Bumblebee first came to Earth.

The story is about a girl named Charlie, played by Hailee Steinfeld, whose dad has passed away and is struggling to find purpose in her life. Charlie tries to deal with the pressures of living with a new step-dad and not being one of the “cool kids.” Along the way, she stumbles upon an old Volkswagen Beetle which turns out to be Bumblebee and gets sucked into an alien war while being chased by the United States Army, the most notable army character being played by John Cena.

“Bumblebee” is a typical holiday feel-good movie with a rather unambitious storyline. Throughout the movie, there were no instances where I wondered what would happen next. Everything that happens in “Bumblebee” has been seen before. My biggest criticism of “Bumblebee” would have to be that the plot has no stakes, everything is predictable and has little significance in the grand scheme of things. It doesn’t have some large, grand story to tell but even the smaller messages can be difficult to discern.

On the other hand, if you were not a fan of the Michael Bay Transformers movie, chances are that you will like “Bumblebee.” “Bumblebee” is a much more relaxed film that focuses on the characters and the relationships between them. And as a longtime Transformers fan, “Bumblebee” was a nice change of pace that showcased Transformers movies can be more than just visual effects spectacles.