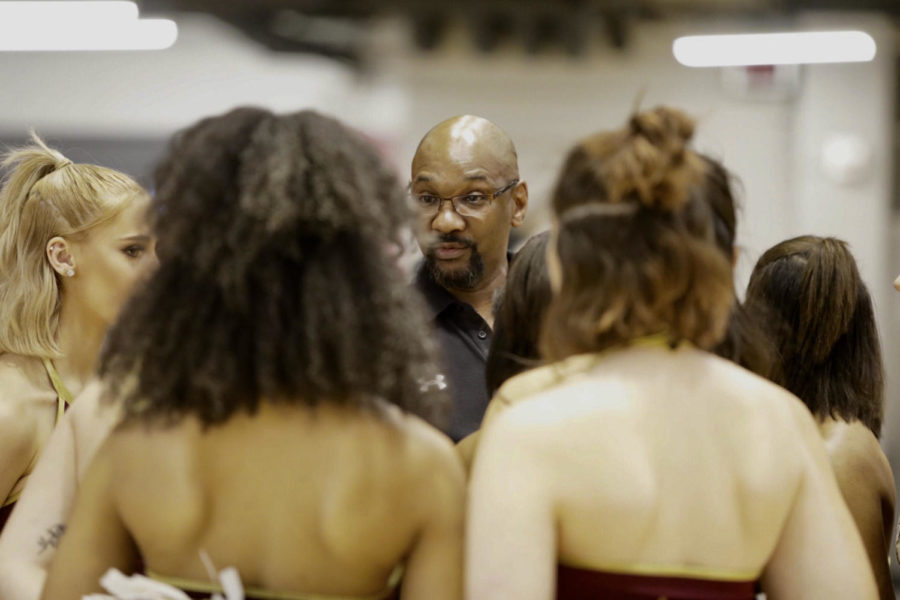 The freshmen of 2016 were both excited and nervous to start their journeys on Loyola’s campus. Athletes that year in three Loyola sports programs faced similar emotions as they were welcomed to The Den.

The Wolf Pack introduced its cheer, dance and swim programs in the fall of 2016, marking the first time those sports had graced Loyola’s campus competitively.

“We added those sports to increase enrollment through intercollegiate athletics,” Simpson said. “The opportunity to compete in college athletics often influences a student’s decision to attend an institution. We had the facilities to support these sports and felt that they would be great additions to our department.”

Simpson admitted there were some challenges when first establishing the programs and getting students excited about being part of the Pack.

“You were recruiting student athletes for a team that didn’t exist yet,” Simpson said. “We had to sell a vision to those recruits and their families — that they would be a part of something unique and special for those inaugural seasons.”

Despite the initial recruiting struggles, Loyola’s athletics department has seen success at multiple levels from the three programs.

“Competitively, the results are pretty obvious, as we have seen great success on a national level,” Simpson said.

The women’s swim team ranked sixth in the country in the Southern States Athletics Conference last year, while the men’s team finished ninth. Meanwhile, Loyola’s competitive dance team finished 11th at its national competition and racked up their second consecutive conference title, and the competitive cheer squad has finished as high as second place in the SSAC over the past three years.

“Academically, the average GPA for those programs is 3.234, so they are exceeding expectations in the classroom as well,” Simpson said.

Cheer and Dance Head Coach Rickey Hill said the teams have grown a lot in talent and size over the years, but he noted both programs dealt with inexperienced athletes in the beginning.

“It was the first year,” Hill said. “A lot of these student athletes had not been coached the way I coach so it was a little stressful here and there.”

Since then, Hill said he has been recruiting hard, and the addition of dance coach Tiffany Willis this year has made the growing process easier.

“We’re getting a lot more talented athletes,” Hill said. “It helps now that we have that experience. We have juniors and seniors who have been under me for two years and they know exactly how things need to be done and there pushing people in the right direction.”

Hill said he’s always had a passion for cheerleading as he was one himself in high school and college. He has done camps, choreography and traveled across the U.S. as well as Germany and Australia.

Despite being around for such a short time, Hill prides himself on making both of the programs stick out from the pack.

“We try to think outside the box,” Hill said.“You know, we don’t want to be like every other team. We want to have a few unique things of our own.”

Hill said that he has pushed creativity in both programs by getting input from the athletes and also bringing people from outside to do clinics as well.

Hill also credits the welcoming aspect of the athletics program as key to cheer’s and dance’s success.

“The student-athletes are like one big family,” Hill said.“The basketball team supports the cheer team and the cheerleaders support golf. We all come together as one like a family and I think that’s what helps us.”

“It was real exciting,” Cohen said.“When I first got to Loyola as a freshman, I was a little bit nervous to be entering a brand-new program because I didn’t know what to expect.”

“Now, being a junior and having a leadership role on the team, I feel that we’ve done a really good job in growing the program,” she said. “I feel really confident that it will continue to succeed even after I graduate. I think that we add a different aspect to the basketball games and that people will come away from the performances they see from us entertained and hopefully excited to see us the next time that we do perform.”

As for biology junior Kristen Williams, she questioned cheering at first, but saw an opportunity that would eventually lead to her decision.

“I really didn’t think that I wanted to cheer in college, but when I heard about the beginning of the program and the opportunity to be a part of the competitive team, I felt drawn to choose Loyola and chose to cheer,” Williams said.

Williams said she felt proud of the athletics department at Loyola since not many schools recognize their cheerleaders as student-athletes.

Williams also enjoys the relationships she has developed while cheering on the sidelines.

“I’ve been able to make a special bond with members of the team that have been a part of the team since the beginning,” Williams said.“I think it makes us understand how hard we have worked to progress and appreciate the team and the coaching staff even more.”

Williams said that she hopes that the program will continue to flourish and compete against some of the most talented teams in the nation.

“As I leave Loyola, I look forward to hearing the growth and success of the team and hope to have left my mark on the team and at Loyola,” Williams said.

Loyola’s swim program has found just as much success as the cheer and dance teams in their three years on campus.

Warren Massimini, business analytics junior, has been a member of the team since it was established back in 2016. He is grateful to have taken the opportunity to join the team when he did.

“The opportunity to start at a first year team and be able to build and watch the team grow, knowing you helped contribute to that growth was a really unique and a ‘hard to pass up opportunity,’” Massimini said.

Massimini also mentioned how the uniqueness of the program has played into the team’s success.

“The swim program is obviously unique due to the age of it,” Massimini said. “Otherwise, we are one of the only girl/guy teams who do every practice and event together which makes a close knit group of now roughly 30 swimmers. For a group that size to function as well as we do is quite unique and welcome.”

The team featured 14 All-Americans from both the men’s and women’s teams as well as the national rankings last year, all of which are improvements from the previous two years.

Head Coach Thomas Natal has been a major factor in the team’s success. As a New Orleans native, he found it difficult to pass up the opportunity to coach a new team from the ground up.

Natal said, “When the opportunity came to work at a school with as good of education and values as Loyola, I was very excited to bring a new program here.”

Natal said that some of the struggles came with laying down traditions for a new program. However, one of the main successes for the team is the addition of swimmers over the years.

Natal plans on continuing the the success around the culture, that he himself, the coaching staff, and the athletics program have built over the past three years.

“Our goal is to always be successful in the classroom and in the pool,” Natal said.“I think with that and putting in the hard work we have everyday, I think we set the bar as high as we can and we take each day-by-day.”

The overall achievements of all three teams has been created ripples within the athletics department. Simpson said that he expects the success to continue for the programs.

“The future is very bright for all our athletic programs,” Simpson said. “We strive to improve each and every day in an effort to perform at a high level both in the classroom and competition.”