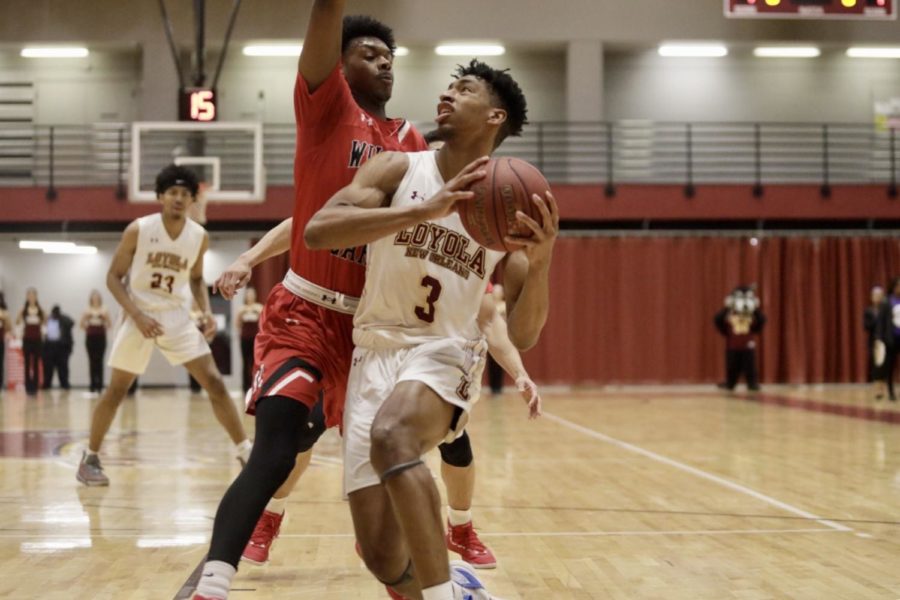 After a gritty first half, the Loyola men’s men’s basketball team was losing by double-digits to Florida College. However, their offense flourished in the second half, as Loyola racked up the win off of a late-game offensive drive.

The Florida College Falcons lead by 15 points after the half-time break, but the Wolf Pack were able to make a strong second-half come back to ultimately win, 96-89, on Jan. 24 at The Den.

Florida College scored first and were looking tough to beat for most of the first half, shooting 49 percent en route to a 48-33 halftime lead, holding Loyola to just 32 percent from the field.

The Wolf Pack assumed the lead 64-62 as Wrightsil grabbed a steal, keeping the teams neck-and-neck for the win.

The Wolf Pack held a three-point advantage for much from then on, winning the game making 10 out of 11 foul shots.

Most notably, Burns recorded his seventh double-double of the year with 25 points and a career-high 17 rebounds. Wrightsil set a new personal record with 34 points in a game, eight rebounds, a block and two steals. Turner had five three-pointers and two steals, making it his personal best for steals this season.

The next game is at 4 p.m. against Brewton-Parker for the Wolf Pack Hall of Fame Game on Jan. 26. The inductees will be honored at halftime of the game.