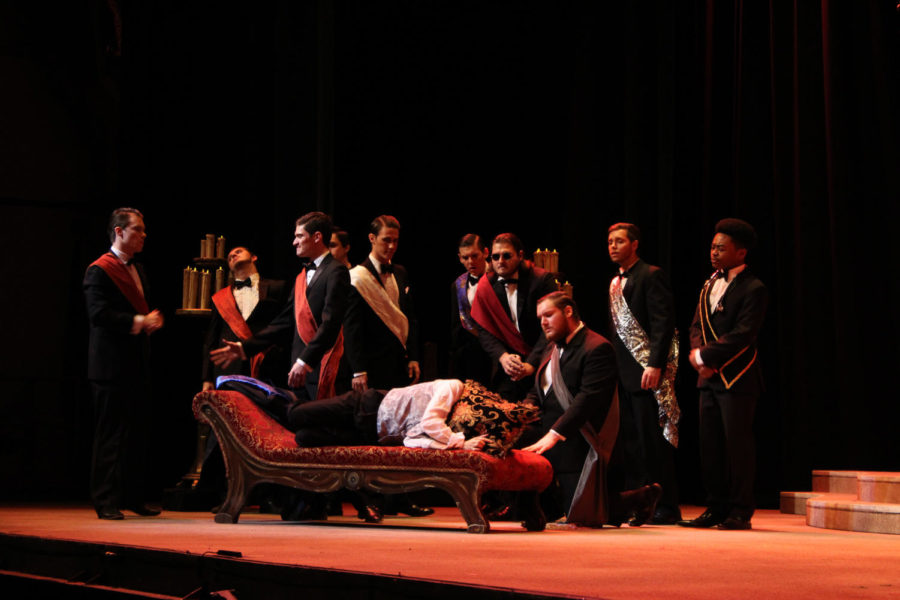 The people of the court surround the prince as he mopes in his chambers. Photo credit: Hannah Renton

Nearly everyone has heard of the “Cinderella story” in which Cinderella is mistreated by her stepmother, meets Prince Charming and loses one of her glass slippers. But what if she lived in the Roaring Twenties and attended a Mardi Gras ball in a shimmering flapper costume?

Loyola Opera Theatre, which is part of Loyola’s School of Music and Fine Arts, kicked off the Mardi Gras season and their centennial year by bringing “Cendrillon” — French for “Cinderella” — to Louis J. Roussel Performance Hall on Friday, Jan. 18 and Sunday, Jan. 20. Different actors played a role each night.

Composed by Jules Massenet, “Cendrillon” is similar to the beloved fairy tale, but without the pumpkin carriage and talking mice

“This is a masterful score, really one of Massenet’s greatest creations, with stunningly beautiful arias and romantic duets, and delicious comic scenes as well,” Carol Rausch, chorus and New Orleans Opera Association director, said. “The orchestration is exquisite and compliments the setting of the French text. We really experience the composer at the height of his powers.”

According to a Loyola press release, the opera premiered at the Opéra-Comique in Paris in 1899 and later made its U.S. debut at the French Opera House in New Orleans.

The opera was about a young servant girl named Cendrillion who works for her snobby rich stepmother, Madame de la Haltière, and her spoiled stepsisters, Noémie and Dorothée.

“Even though she has a difficult life, she doesn’t hold hatred in her heart,” performance, voice graduate student Quinn Rulison said about her character, Cendrillion. “She still loves her sisters even though they are selfish and nasty to her.”

The opera was sung in French, but there were English supertitles above the stage so viewers could make out what was being said.

“The music is immensely challenging,” Rulison said. “It is some of the most I have ever sang, but I could not have done the role without the help of Carol Rausch. I really loved working on this role dramatically and reaching new emotional levels that I haven’t reached before as a performer.”

Rulison said that Cendrillion was her first leading romantic role, so it was much more emotionally engaging than any of the other roles she played in the past.

Performance, voice graduate student Zara Zemmels played the role of Prince Charming in Friday night’s performance. She said that there were different ways the audience could analyze the prince’s character.

“You can play him as a privileged, lonely jerk or a really genuine person who hasn’t been given the opportunity to do what he wants with his life,” Zemmels said.

While the prince lives comfortably in his palace filled with diplomats and dictators, he’s a lonely guy who’s never had a romantic relationship, let alone a close friendship.

According to Zemmels, she and Rausch came up with a good interpretation of the prince being frustrated and angry but eventually warming up after meeting Cendrillon and becoming a better person.

“Some people may think you can’t because he’s a prince, but everyone can relate to wanting love and feeling really lonely, and that’s what he’s going through, particularly at the beginning of the opera,” Zemmels said.

The father-daughter relationship between Cendrillon and Pandolfe was also a powerful element. She is willing to sacrifice her happiness so her father can live a happier life, according to Rulison. This was shown when Cendrillon ran to die in the forest out of fear that she would burden her father with her own heartbreak.

“I like that Cendrillon always puts others first and doesn’t resent those who have more than her, but instead is happy for them,” Rulison said.

Putting on “Cendrillon” wasn’t easy, considering the budget. Fortunately, the Loyola Opera Theatre found a creative way to work around this.

Another challenge was putting everything together and deciding how to portray the different elements of the opera to the stage.

“There are so many elements to the show and so much magic that needs to be portrayed on the stage” Rulison said. “I think the cast and production team did an amazing job of bringing this to life, and our director, Rachel Harris, so beautifully dreamed up every element of the show.”

Like Rulison, Zemmels gave credit to Rausch for making this production a big success.

“We had the right singers for it,” Zemmels said. “Carol Rausch, who picks the opera, is really brilliant at picking exactly what’s going to best showcase the talent that she has here.”