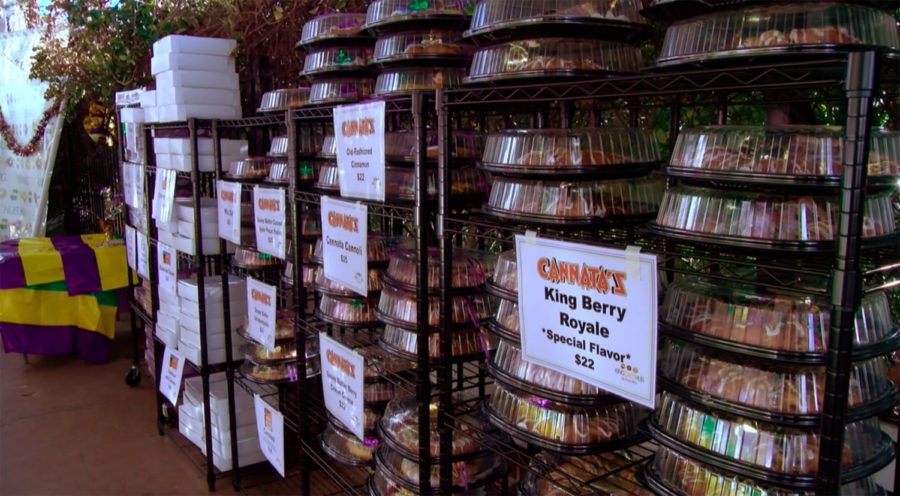 King cakes from bakeries across New Orleans sit on display at the King Cake Hub. The hub offers more than 30 varieties of king cake and will remain open through Lundi Gras. Photo credit: India Yarborough

The shop, located at 4800 Canal St., is called the King Cake Hub. The hub’s owners have partnered with bakeries from across New Orleans and southeast Louisiana to bring more than 30 varieties of king cake to the shop every day.

“You don’t have to drive 15 minutes out to Harahan or out to the West Bank or New Orleans East,” said King Cake Hub owner Will Samuels. “We bring everything to one location right here — your favorite king cakes in one central spot.”

Samuels said the hub has seen a steady stream of customers since its grand opening Jan. 6. The opening itself, he added, attracted around 200 people.

“So now our favorite is going to evolve because we have so many different choices,” Susan added.

Samuels argues that is exactly what should happen.

“There are so many ones that are out there that are so good,” he said. “You’ve got to be able to explore and try different things.”

This isn’t the first time Samuels has dipped his toes in the king cake business. Samuels and his wife Jennifer owned Pizza Nola for more than seven years before closing the restaurant last year. They sold a limited supply of homemade king cakes from their pizzeria. When Pizza Nola closed, they thought selling king cakes during Mardi Gras might be the perfect next step.

“Gambino’s contacted us right as we were closing down and said ‘We’d love to be your supplier,’” Samuels said. “Over the last year, we’ve been talking to other bakeries to get them on board, and it just kind of worked out.”

Deciding on a location, he added, was not a hard choice either.

“We had first thought about the mansion, the Mortuary, in the summer, and we were like ‘Oh, it would be cool if we could be here,’” Samuels said. “It’s just an iconic location. It’s convenient to everything, right in the center of town and on Canal Street with the streetcar. It just worked out perfectly for us.”