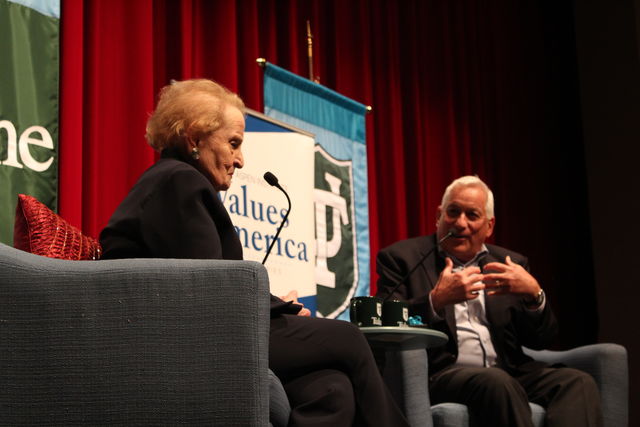 Before she was a teenager, Madeleine Albright, now 81, had fled two forms of fascism—Nazi-occupied Czechoslovakia in 1939 and a communist regime in her home country in 1948, the same year her family immigrated to the United States.

Albright, who in 1997 became the United States’ first female secretary of state, visited Tulane University on Tuesday, Feb. 12 to discuss those experiences and her most recent book, “Fascism: A Warning.” To a standing-room-only crowd of students, professors and New Orleans locals, Albright explained the history of fascism and her perception of fascism’s rise today.

“The thing that bothers me is when people throw the term fascist around without really thinking about it — anybody you disagree with is a fascist and then the teenage boy who’s not allowed to drive thinks his father’s a fascist,” Albright said. “The main thing is that fascism is not an ideology. It is a process for getting and taking power.”

Albright added that defining fascism isn’t easy. She said the radical form of leadership stems from “anger and disquiet and division.”

“[A fascist] is a leader who identifies himself with a group of some kind, usually a nationalist group, but then is opposed to a smaller group of people, and the smaller group of people are to blame for the problems,” Albright said. “And then it’s a leader who not only exacerbates that difference but has absolutely no respect for the press … and the system, the importance of the judiciary.”

In her book, Albright writes about a number of authoritarian leaders, including Italy’s Benito Mussolini, who she said was the world’s first modern fascist.

“The best quote in the whole book,” Albright said, “comes from Mussolini, who said, ‘If you pluck a chicken one feather at a time, nobody notices.’ And so I think there’s a lot of feather plucking going on.”

Albright has decided only one modern country, North Korea, is currently run by a fascist regime. She added, though, that as “an optimist who worries a lot,” recent events in the United States have been troubling.

“I’m troubled by some of the things that are going on in the United States, the division that I see and the fact that there is a real action, I think, from the highest level of exacerbating the differences instead of trying to find that common ground,” Albright said.

Albright has been an outspoken opponent of President Donald Trump since he took office in 2017. She described him Tuesday as “the least democratic president we’ve had in American history.”

Albright makes a point not to call Trump a fascist, but she said it is important to note that the leaders she writes about in her book rose to power democratically.

“All leaders that I talk about that are authoritarian, dictatorial, were elected, and I think that is something we need to understand,” she said.

Albright’s talk Tuesday was peppered with timely jokes, stories of her personal experiences and political commentary about everything from domestic immigration policy to her views of international diplomacy. The hour-long session, which took place in Tulane’s Dixon Hall, was part of the Tulane/Aspen Institute’s Values in America Speaker Series.

“It’s important for us to have the chance to discuss our values,” Isaacson said. “It’s values of respecting every individual in this country, listening to diverse ideas and finding common ground that will make our nation stronger.”

The Aspen Institute is a nonpartisan educational and policy studies organization, according to the institute’s website, and Isaacson is listed as a past CEO.

“It was an opportunity for them to listen to a real, live secretary of state, the mindset of the things she experienced and what she has learned on the job while doing her public service,” Gamble said. “They were very excited. They loved the way she spoke and how clear she expressed her views.”

And many attendees had copies of Albright’s book already in hand. Everett Phelps, a 2015 Tulane alumnus, said he found the book thorough and relevant, and he stuck around after the talk for a scheduled book signing.

“I found the book very interesting and a bit concerning because I see a lot of the things that she’s talking about happening in our country and other regions around the world,” Phelps said.

“Some people think my book is alarming,” she said. “It’s supposed to be. It’s a warning.”