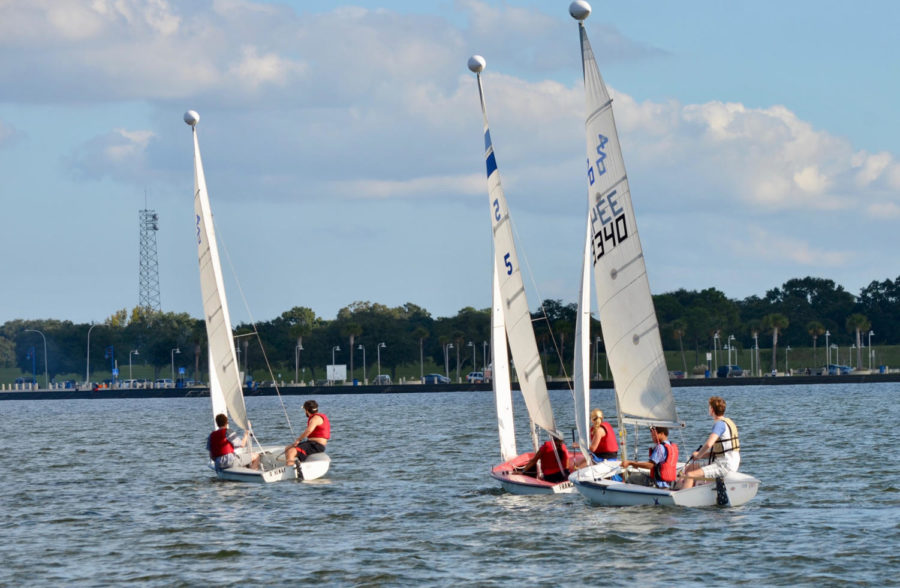 Loyola’s sailing club practices on the waters of Lake Pontchartrain, an almost 20-minute drive away from campus. The sailing team offers students a chance to compete in regattas across the nation. Photo by Sofia Giordano.

Instead of lacing up hightops, warming up in the bullpen or taking practice laps, one set of athletes prefer bracing strong winds, icy tides and seasickness.

Sofia Giordano, president of Loyola’s sailing club, has found a home on the waves and said her team feels the same way.

“The people that join (the club) really love it,” the environmental biology senior said. “They go ‘Oh, I would’ve never gotten into sailing if I didn’t randomly join in college.’”

The skills her team learns while on the waters of Lake Pontchartrain are useful in situations other than sailing, Giordano said.

“You have to communicate with each other. You have to work off each other, understand what the other person is trying to tell you to do and do it quickly.”

From cold, windy weather to capsizing, the crew has grown from competing and practicing in extreme conditions. 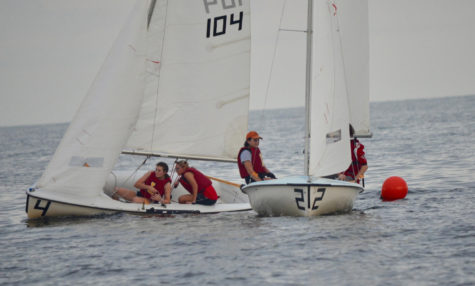 The sailing club practices on Lake Pontchartrain for their regattas. The team competes with teams across the South. Photo by Sofia Giordano.

“We get into situations, like it’s cold, the boat flips over, it’s raining and then we survived this traumatic experience together. Go us,” Giordano said.

Though Giordano has been an avid sailor since her time at Ursuline High School, she hopes that a lack of experience does not prevent anyone from getting their feet wet.

“A grand majority had never sailed before,” Giordano said when describing her teammates. “Most people are like ‘That looks fun, let me try it,’ and they stick with it.”

Natalie Kulka, the sailing club regatta manager, also feels that there is a sense of camaraderie among the team.

Kulka, music therapy sophomore, always loved being near the water but had never sailed before joining Loyola’s sailing club. She said that people shouldn’t hesitate to join just because they lack experience.

“You definitely have to be someone who isn’t afraid to put your foot in the water, test the water, quite literally,” said Kulka. “But it comes really naturally, I think, to a lot of people.”

While some students are hesitant to join, others simply haven’t heard of the sailing club, according to Giordano. Despite attending organization fairs to recruit people, the sailing team feels overlooked when it comes to club sports, and the location might be why.

“We don’t try to make it hidden. People just don’t know we exist,” Giordano said. “You see a quidditch team practicing in the quad. But everything we do is in the middle of the lake.”

Just because the sailing club doesn’t practice close to campus doesn’t mean the team is any less competitive.

Loyola’s sailing team takes a group photo in front of their sailboats. Photo by Sofia Giordano

Compared to their usual competition, Loyola is one of the smaller universities when it comes to sailing teams. But, that doesn’t stop members from competing in regattas against bigger schools, like Tulane and Texas A&M, across the southeastern United States.

While competition itself can be rewarding, sailing club coach Kevin Gunn said that sailing has many more benefits than just bragging rights.

“It is a skill that you’ll have for the rest of your life which is why I promote sailing so much with young people,” said Gunn.

The sailing club isn’t all about the competition. Kulka agreed that there is more to sailing than winning and that the club gave her the opportunity to meet new people.

“I love that it brings together a really unique group of people that wouldn’t necessarily have been friends otherwise. But, we all share the same passion of being on the water and being on a team and wanting to better ourselves.”

All in all, the sailing club provides an experience on the water that no other club on campus could.

“Recreational sailing is fun, but you can only do it for so long,” Giordano said. “Competitive gets your adrenaline going. It makes it more interesting for everyone and gives people an incentive to learn how to sail.”