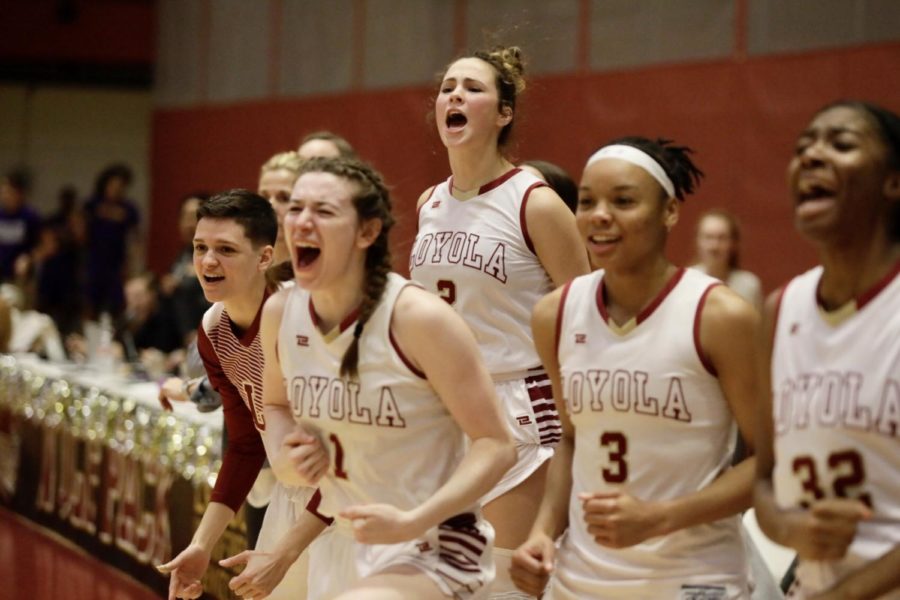 Loyola's women's basketball team celebrates a play versus Bethel University in The Den on Feb. 14. The women's team ended the regular season as the No. 2 seed in the conference. Photo credit: Andres Fuentes

The Wolf Pack played efficiently on both offense and defense to take down Martin Methodist on the road, 74-61.

It was the Red Hawks’ game in the first quarter. Martin Methodist led Loyola by as much as eight points in the opening quarter. Loyola would trail 19-11 as the first buzzer sounded, but the second quarter was a different story.

Loyola went on a 23-7 run and ended the quarter with a score of 38-33. The Wolf Pack built on their lead in the third quarter. The team left the final score at 57-49 after denying a Red Hawks’ lead change.

In the final quarter, Loyola kept their opponent to only seven points in the first six minutes. The Wolf Pack would go on to win the game, making their all-time record versus Martin Methodist rise to 10-3.

Mathematics sophomore Presley Wascom was hot beyond the arc. She sunk four three-pointers and ended the game with 14 points.

Psychology senior Megan Worry blocked two shots on the night. She has 124 career blocked shots, which is just seven behind Loyola’s leading shot-blocker.

Biology senior An’Jolique Woodson racked up a career-high 12 rebounds, seven of which were on the offensive side. Woodson also earned six points, three assists and a block.

The team wraps up the regular season with a 23-6 record and a 17-3 conference record. They stand as the No. 2 seed of the Southern States Athletic Conference.

Loyola now looks ahead at the conference tournament and defending last year’s championship. The team will travel to Montgomery, Alabama to face off against the winner of William Carey and Florida College on Feb. 28.