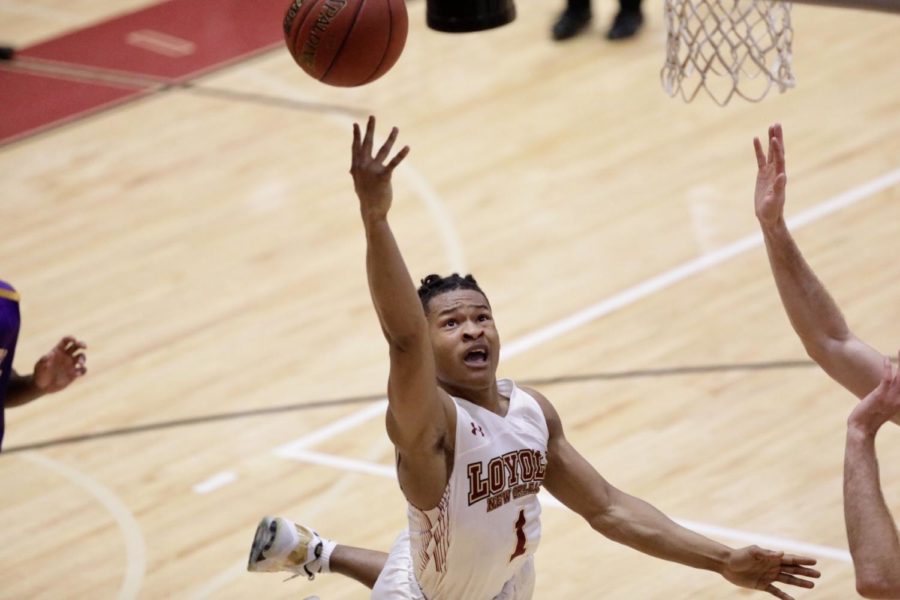 Freshman Cameron Dumas (1) lays up a shot in The Den versus Bethel University on Feb. 14. Loyola enters the conference tournament as the No. 4 seed. Photo credit: Michael Bauer

With the hopes of a high seed in mind, Loyola traveled to Martin Methodist hopefull for a simple win. Instead, the Wolf Pack dominated the Red Hawks on the offensive end, winning the game 82-55.

Loyola shot 52 percent from field goal range, 50 percent from beyond the arc and 72.7 percent from the free throw line, compared to the 35 percent, 12.5 percent and 57.9 percent that Martin Methodist respectively shot.

Mass communication freshman Myles Burns also had a notable night. Burns is now in fourth place for the most rebounds in a single season with 265. He has seven rebounds, six points and two blocks in the game.

Loyola finishes the regular season with an overall record of 18-11 and a conference record of 13-9.

The Wolf Pack sits at the No. 4 seed of the Southern States Athletic Conference and will play No. 5 Dalton State in the conference tournament on Feb. 28.