Though many students go to college expecting the usual learning, lifelong friendships and extracurricular opportunities, many don’t anticipate the amount of crime that they could fall victim to.

According to New Orleans Police Department Second District Commander Jennifer Dupree, college students are just as likely to fall victim to crime as any other person.

“There is no set pattern or time frame,” Dupree said.

In New Orleans, crime reached its peak with a total of 61,799 crimes in 1990, according to NOPD’s Crimes and Rates of 1990 – 2014. Though the amount of crime has dropped significantly since 1990, it is still a constant threat to most citizens, including college students.

For college students, Dupree says the most common crimes committed against them is theft, robbery and sexual assaults.

According to crimemapping.com, a website that shows reported crimes in certain areas, from Jan. 24 to Feb. 20, there has been a total of 115 reported crimes within a one mile radius of Loyola’s campus.

Out of those 115 reported crimes, 39 were thefts, 22 were vehicle thefts and break-ins and 12 were vandalism.

Dupree recommends students go to crime seminars put on by Tulane and Loyola to make them more aware of their environments. 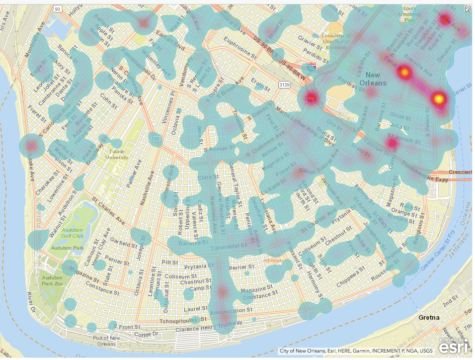