Loyola gears up for one last dance at Nationals 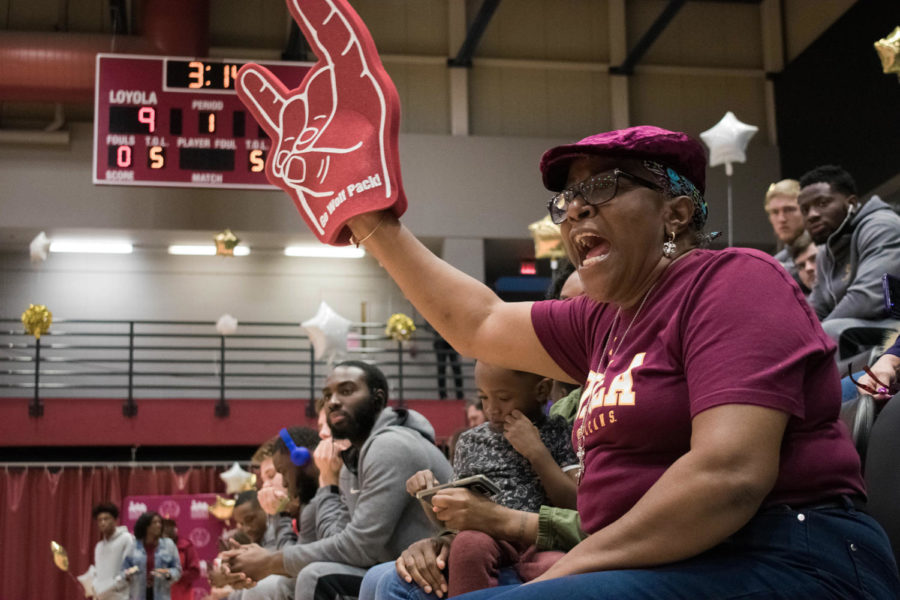 A Loyola fan cheers on the women's basketball team versus Bethel University on Feb. 14, 2019. Both teams will be competing in the national tournament this year. Photo credit: Michael Bauer

It’s not enough that Loyola’s men and women’s basketball team won the conference crown, but both teams look to bring one more banner home and earn one more ring at the National Association of Intercollegiate Athletics championship tournament.

This year’s tournament marks the second time that both teams will play on the national stage in the same year and both teams look to make their mark in front of the country’s top teams.

The women’s team raises banners as consistently as the Golden State Warriors. Over the stretch of four years, the Wolf Pack squad has won three conference titles, but their latest victory was no easy task.

Loyola entered the tournament as the No. 2 seed, taking out Florida College and Stillman College in the opening rounds to face off against the No. 1-seeded Bethel University.

On the back of international business junior Kaila Anthony and her cast of role players, they slashed through their rivals, beating the Bethel Wildcats 73-65.

“I feel like with this team and with this program, we go through that every year,” Head Coach Kellie Kennedy said. “Our expectation every year is to win a conference title.”

Anthony racked up a career-high 30 points, six rebounds, three steals, a single block and capped it off with the game MVP trophy.

“It felt great,” she said. “I wasn’t expecting it honestly. Receiving the award was cool but overall it was really humbling.”

The championship was capped using the team’s signature “next man standing” style, which is something they hope to bring with them in the national tournament.

“Each timeout, we can have someone different step up and be the leading scorer, rebounder, or (lead in) assists,” Kennedy said. “It could be so many different people in our program and I think it makes us hard to defend.”

Loyola is looking right at a mirror entering the 2019 tournament. Just like last year, the Wolf Pack will play in the Liston Bracket as the No. 6 seed, facing off against No. 3 Our Lady of the Lake.

The team hopes to replicate their 2018 89-86 victory and move beyond the second round, where their title hopes died last year to Westmont College.

“We hope to get a championship,” Anthony said. “That would be fun. If not, I would at least like for us to make the final four (teams). It would be nice to go past the second round this year.”

Kennedy thinks similarly but stresses that the road to a national title is a slow one.

“They’ve talked about getting further than they’ve ever gone,” she said. “But you got to take it like everything, one game at a time.”

The women’s team will face Our Lady of the Lake in the opening round of the tournament on March 14 at 10 a.m.

The men’s squad entered the conference tournament as the dark horse with the No. 4 seed and a freshman-led, 18-11 team.

However, the Wolf Pack clawed their way through the top teams in the nation to hang their first Southern States Athletics Conference banner in team history and claim a spot in the national tournament.

Loyola narrowly won versus Dalton State College, 68-66 and took down the nationally-ranked, No. 5 Stillman College, 85-72 in the second round of the tournament.

The underdogs faced Middle Georgia State in the final round, capping the title with a 78-74.

“It’s exhilarating,” Burns said. “Coming in as a freshman (and winning it) means a lot. It’s astounding.”

The banner, the trophies and a championship ring was not something the middle-seeded team thought they would celebrate, but it’s now something they keep in mind going forward.

“They didn’t expect us to win conference, so we definitely have an underdog mentality. It just comes along with it,” Burns said.

The win was unexpected but nonetheless sweet.

The road to the championship was a rough one, with Loyola having to overcome regular season slumps and growing pains, but the team muscled through to the title.

“If it had not been for our hardship, it would not have set the year,” Hollowell said. “If you look at the progression through the season, it has gotten better. (The team) learned the value of possession. They learned to defend better and they’ve done a heck of a job on the glass.”

Loyola has already built off of last year’s success when their season ended with a second-round loss in the conference tournament to Dalton State. Now, the Wolf Pack are gearing up to play Missouri Baptist on the national stage.

However, this year’s team is filled with confidence in their upcoming title run.

“We are trying to make history,” Burns said. “It’s the biggest key for us. We want to get our seniors to leave with a bang.”

Loyola will face Missouri Baptist as the No. 6 seed in the Naismith Bracket. The team will play on March 20 at 8:15 p.m.