Tennis captain and head coach thrive as one unit 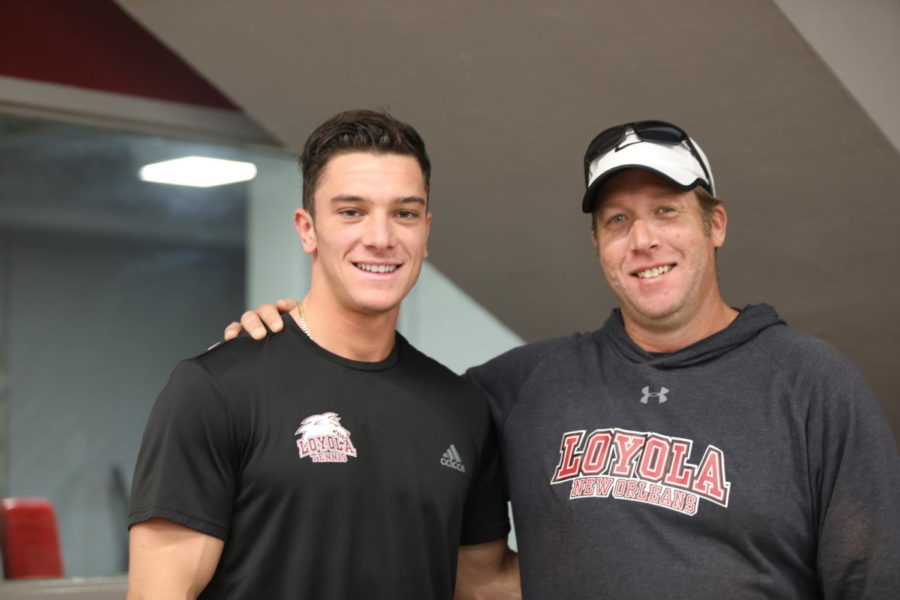 Marketing senior Sean Presti and tennis head coach Kyle Russell pose for a photo at The Den. The duo is cherishing their final year at Loyola together.

The bond between a coach and an athlete is one that is formed through practices, competitions and grit. It’s a pure relationship that exists through even language and culture barriers.

A Loyola pair was brought together, after being nearly 5,000 miles away from each other, and after four years in the tennis program, both Head Coach Kyle Russell and team captain Sean Presti are enjoying their final years as master and apprentice.

Their relationship began once Russell started as head coach of the tennis teams. Presti, a native of Lesigny, France, was his first recruit as the leader of the program, and one that did not take too much persuasion to join.

Russell said, “(International students) are often a lot easier to recruit. The kids in the New Orleans area often want to get out of the city and find somewhere new. But man I am so happy that we got Sean.”

Spanning across his freshman and junior years, Presti has racked up 42 victories across singles and doubles competitions, which the type of productivity Russell expected from the French athlete.

Russell said, “(Presti) really started to think his way more through matches and really just kind of get it. There is something you call a ‘click’ in tennis where it just clicks and all of a sudden you really understand the game.”

Despite Presti’s growth on the court, the tennis star still acts like the friendly highschooler that the staff got to know on their recruitment trip.

“He was always the fun kid, always cracking jokes, always fun to be around, but the difference is now he is taking that leadership roll on now and he is taking it very seriously,” Russell said.

From a comical freshman to a seasoned veteran, Presti now feels its time to share what he’s learned with his teammates in his last season in maroon and gold.

“Since I began playing tennis at Loyola I became more competitive and wanted to show my teammates I could be a leader as I got older and grew with the team,” Presti said.

After his final serve at the courts in City Park, Presti hopes to use what he’s learned as a student-athlete for his future endeavors away from the rackets and tennis balls.

He said, “(I want to) use tennis in my professional career as a businessman to my advantage by networking through tennis connections. Playing a sport in college has taught me a lot about time management and organization, which are skills I will use for the rest of my life.”