SGA senate says ‘no’ to vetoes 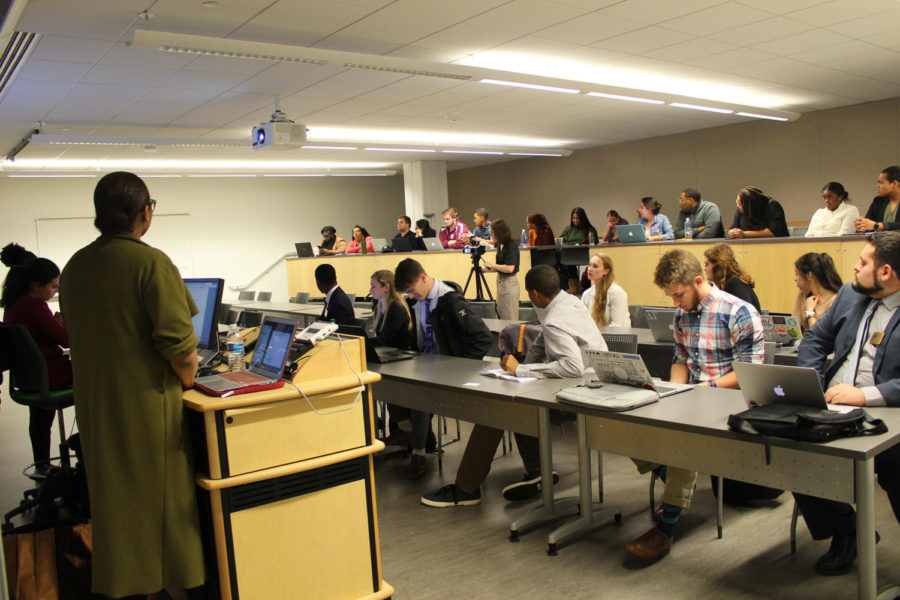 For the first time in 10 years, the Student Government Association Senate has unanimously overturned a presidential veto. In fact, they overturned three.

The president is allowed 72 hours after legislation is passed by the senate to use a veto. Ambrose vetoed all three initiatives within 24 hours of their passage, without talking to any of the initiatives’ authors or Heather Malveaux, director of Iggy’s Cupboard and a member of the Food Insecurity Committee.

“It shouldn’t have had to come to this. It should have been something that was talked out before we got to this process,” Malveaux said after the meeting. “And I’ve expressed that to her, and expressed that to others, and just wish that those of us who did express that to her were heard.”

After the meeting, Ambrose admitted that she had been unaware of the 72-hour window until senators brought it up at the senate meeting.

“I didn’t even know that I had 72 hours, because that just passed. And as Joann stated before, because she gives updates, but those updates have been less thorough and weren’t clarified to me,” Ambrose said explaining why she took only 24 hours to veto.

The president is also required to explain their veto reasoning to cabinet members at an executive board meeting as well as to the senate as a whole.

At the senate meeting, Ambrose said she vetoed the bin collection initiative due to a simple misunderstanding. She thought temporary bins that had already been set up around residential halls, were actually permanent. Once she spoke to the senator who wrote the legislation, Glory Tomi John, Ambrose encouraged senators to overturn her veto.

“You guys can override my veto,” Ambrose said. “I really appreciate you having those boxes.”

Next, Ambrose explained her decision to veto the Blue Bike initiative, saying she wanted a more structured implementation plan. She suggested that the bill may be stronger if senators spoke with Tulane SGA and Blue Bike administrators – steps, Kristin Williams, senator-at-large who wrote the initiative, had already taken and spoke about at previous senate meetings.

“I find it pretty disheartening that you haven’t been to too many meetings,” Williams said to Ambrose. “I’ve talked about Blue Bikes. So, to all of a sudden have my legislation vetoed, that I worked tirelessly on, is a little disheartening and kind of makes me want to yield back from senate a little.”

Ambrose admitted she had not known about Williams’ plan for Blue Bikes and encouraged senators to be thorough in their legislative reports to her. She also apologized for missing senate meetings due to a conflicting class.

“I am glad that we are having this conversation,” Ambrose said.

“I just wish it would have happened before a veto,” Williams responded.

Ambrose said she vetoed the bill that would provide SGA funds to stock Iggy’s Cupboard because she was concerned the money would be taken from incoming president and vice-president housing stipends and meal plans – something she said she feared would create more food insecurity.

“I just wanted to make sure we weren’t imposing an insecurity on anyone else by making SGA a privileged organization,” Ambrose said.

While there are talks to reallocate money from the president and vice-president’s stipends to cabinet members’ compensation, that decision is unrelated to the Iggy’s Cupboard initiative. The funds allocated to the cupboard would not require a cut to anybody’s compensation.

When this fact was pointed out at the meeting by Jaquille Collins, assistant director for campus programs, Ambrose apologized for the misunderstanding and said she had spoken to a senator who she refused to name, and had acted on the word of that senator.

“I definitely spoke to a senator prior to vetoing. I think they want to remain anonymous,” Ambrose said when questioned. “If that senator would like to announce themselves.”

No senator spoke up.

Ambrose fielded questions from senators, student observers and staff about the decisions she had made leading up to her veto.

Malveaux listed the people she believed should have been consulted – including the author of the bill, Kyle Barden, Chief Justice Rana Thabata and herself.

“I am confused as to why all of these people have all of the answers were not consulted. And that is disturbing that you have questions and access to answers that you did not speak,” Malveaux said. “And you also had time to schedule meetings, send a text, no one is unreachable. Why did you not ask these people? Everyone here deserves an answer.”

“I did not reach out to the author of the bill because I believed this senator was trustworthy enough,” Ambrose said.

Ambrose agreed with Malveaux’s criticisms and reiterated her trust for the one senator she spoke with. She admitted that she now sees an issue with her line of thinking.

“I was not being transparent and I was not reaching out so I definitely believe this was my fault,” Ambrose said.

Incoming senator for the College of Arts and Sciences, Brionna Adams, questioned if Ambrose’s role as president had influenced her decision-making when she had thought the president’s stipend would be cut.

As Ambrose fielded more questions, she was apologetic and admitted she had made an impulsive decision and should have reached out to more senators. Ambrose also said she had been given a large bulk of legislation to look over after first semester, and this new semester had seen the start of a transition toward a different process.

Cassama responded by saying her explanation did not account for all of the senate updates Ambrose had been provided by Cassama at cabinet meetings.

“You’re given the opportunity to come to senate meetings every week,” Cassama said to Ambrose.

When it came time to vote, the senate unanimously overturned all three vetoes.

After the overturned vetoes, Ambrose said she thought the meeting had gone very well.

“In my opinion, this is the best senate has ever run, just from the ones I’ve been at. It was very professional, not saying that they aren’t, but the standard was raised.” Ambrose said.

She said she wasn’t upset her vetoes had been overturned and instead felt that it demonstrated the passion and love the senators have for the Loyola community and students.

Malveaux expressed her hope that Ambrose would have recalled her veto instead of having to go through a long process of overturning the veto, but she was happy the vetoes were overturned.

“I’m very proud and grateful for the work that Tomi and Kyle put in to author the legislation and bylaws for Iggy’s Cupboard,” Malveaux said.

“I was more proud of the fact that the senate was able to see what needed to be done to tackle food insecurities on campus,” Cassama said.