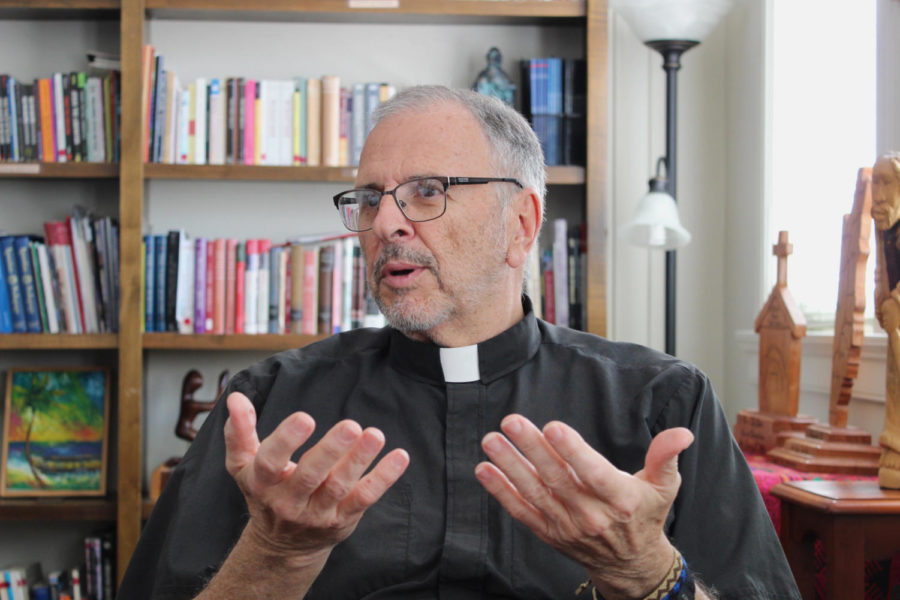 The Rev. Ted Dziak, S.J., sits in his office in the Department of Mission and Ministry on March 26, 2018. Dziak announced that he will be gping on a year-long sabbatical as well as resigning from his role as Vice President for Mission and Identity. Photo credit: Jawdat Tinawi

The Rev. Ted Dziak, S.J., announced that he will be taking a year-long sabbatical as well as stepping down as vice president for mission and identity after 10 years in the position.

According to Dziak, Jesuits do not typically take sabbaticals. Usually this is an opportunity open to a lay faculty person who is taking time off not only to relax, but to also focus and do deeper study by reading, writing and researching within their field.

As of now, his plans consist of revisiting his spiritual roots.

“Part of it will be centered around Ignatian spirituality, partly because I love it and I still have so so much to learn. I am teaching in Belgium with the study abroad program, and then after I am done I hope to officially start my sabbatical in Europe,” Dziak said.

He said he also hopes to connect with his family’s history as well as that of the Jesuit Order.

“My grandfather from my father’s side was from a small town in Poland, and my mother’s side was from a small town in Italy, and I am going to visit my heritage. I would like to see the Chiesa del Gesù, Rome, Italy where Ignatius Loyola is buried, and all of the Jesuit sites in Rome,” He added. “When you study something, it is always important to go through and experience it, in realizing you are a different person at different stages of your life.”

Father Ted has been a key figure in founding programs at Loyola like the Ignacio Volunteers and the Department of Mission and Ministry. But that’s not what he considers his biggest accomplishment.

“The most important thing about my role as vice president was not serving on all these committees, but trying to inculcate the mission of the school in a way where faculty, staff and students made it their school. It doesn’t belong to a group of eight or 15 jesuits. It is up to the students, faculty and staff to foster our identity, and it’s not solely spirituality,” Dziak said.

Charlie Seiter, economics senior, had the opportunity to attend Dziak’s mission trips to Belize and helped with the fundraising, community building and lesson planning processes.

“Father Ted’s spiritual direction has been invaluable to me. He helps me to see and really understand the depth of situations,” Seiter said. “His practical, down to earth application of Ignatian spirituality has helped me a lot in discerning future plans, relationships and many other things. He guides me and provides different perspectives so that I can make informed and free choices.”

Alexander Lucas, music senior, regularly visits Dziak’s office for spiritual guidance and confession. He credited the reverend as being a key factor in helping him get a Magis Grant enabling him to study abroad in Germany at the International Performing Arts Institute.

“It’s going to be hard not having him around. He does so much for the faith community at Loyola that no one knows about. His devotion to Loyola students, faculty and staff and growing their faith is always evident in everything he does,” Lucas said.

Payton Alexander, biology sophomore, took two trips to Belize with Dziak. The 14-day trip was his first time out of the United States and he was without a cellphone, internet and running water.

“Father Ted immediately took me under his wing and told me to trust in him, trust in the leadership, trust in God and go out of your comfort zone,” Alexander said.

On the trip Alexander got an emergency call that a friend had attempted suicide.

“Father Ted pulled me aside and told me some things I will never forget. He told me to take a few deep breaths and just focus on being thankful for my life and everything around me,” Alexander said. “And that call made me realize how precious life is and to not take anything for granted. He pushed me in a direction in my faith life that, ultimately, whatever is going wrong in my life to be thankful for the experience.”

As for whether Dziak will be returning to Loyola, the question still lingers. He will be using the Ignatian process of discernment, aligning the head, heart and spirit to help make that decision moving forward.

If he does return he says he does not want to do administrative work.

“I want to be available to students, faculty and staff in growing their faith. Whether it’s creating different variation of the Ignatian exercises, or even community outreach,” Dziak said.