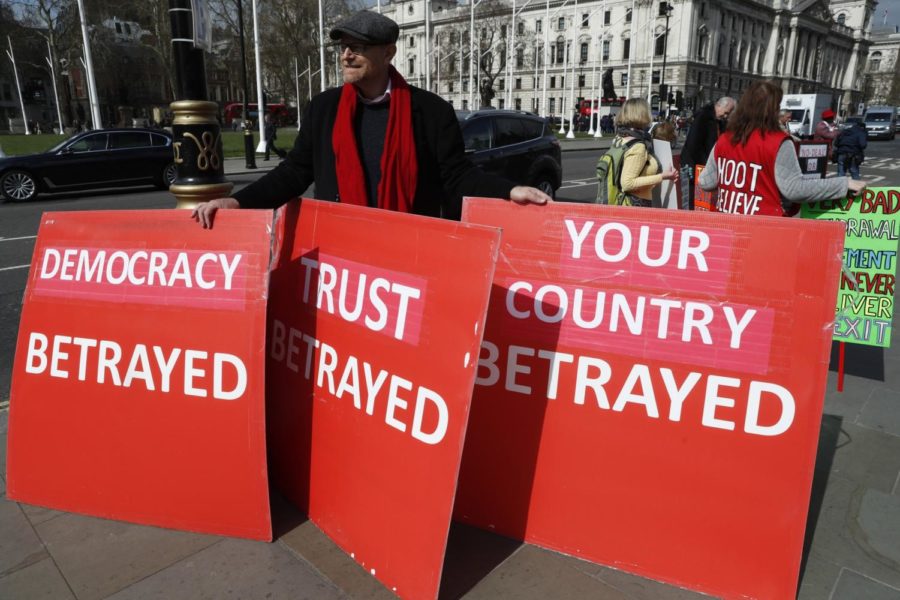 A pro-Brexit protester holds onto placards as he demonstrates near the House of Parliament in London, Tuesday, March 26, 2019. British Prime Minister Theresa May's government says Parliament's decision to take control of the stalled process of leaving the European Union underscores the need for lawmakers to approve her twice-defeated deal. (AP Photo/Alastair Grant)

Welcome to a new kind of tension.

On Saturday March 24, over a million people took to the streets in central London in protest calling for any Brexit deal to be put up to another public vote. According to The Guardian, an online petition asking British government to revoke Article 50 and remain in the European Union has reached over five million signatures. Brexit, the shorthand name for the United Kingdom’s departure of the European Union, has stirred up a lot of political tension in the United Kingdom. But why? How did the United Kingdom end up here, and what does it mean for them going forward?

Parliament started moving ahead with Brexit after the people voted to leave the European Union in a referendum. A referendum is a direct vote among the electorate on a particular proposal, according to gov.uk. Referendums under the Constitution of the United Kingdom are not legally binding however, only advisory, meaning Parliament can back out of Brexit entirely if they choose to. However, Theresa May, prime minister of the United Kingdom, has ruled out revoking Article 50, which would cancel Brexit, according to a BBC article.

But in June 2016, Britain voted to leave the European Union by a slim 51.9 percent to 48.1 percent margin, setting Brexit officially into motion, according to a BBC article. Brexit was initially set to take place on March 29, 2019, but Parliament voted to extend the deadline by at least two weeks, as members of Parliament remain gridlocked on how they want to enter the Brexit transition period.

Members of Parliament have already rejected Theresa May’s proposed deal to leave the European Union twice and voted against holding a second referendum. Early into her prime-ministerial term, May outlined what she believed a Brexit deal was. She has remained headstrong in those beliefs ever since, as she has not been wiling to listen to alternative ways of moving forward proposed by members of the opposing Labour Party or more centrist members of her own Conservative Party, according to John Street, a professor of politics at the University of East Anglia in Norwich, England.

“Although she talks about conciliation and reaching out and so on, she hasn’t done that,” said Street. “She’s in a very difficult position if she were to try and compromise, but it’s about the only way anything more rational can be achieved.”

Street acknowledged how Brexit may not seem to make sense to American spectators, but in the context of its culture and history, the decision to leave the European Union starts to make sense.

“I think from the outside, (Brexit) might look a bit odd. This is a globalized world, you can only make things work in alliance with others. So why would you, as a relatively small state choose to cut yourself off from it? What is it you think you’re achieving?” said Street. “But on the other hand, I think Americans understand that federal organizations, resisting it is something that’s deeply enshrined within the American constitution.”

Britain has historically tended to look across the Atlantic to the United States rather toward Europe culturally and geopolitically when it thinks about itself and its position in the world, according to Street.

“The idea of being dictated by Washington that people don’t happily agree to, so it is too in Britain. We don’t like to be dictated by Brussels.” said Street.

Brussels is the capital of the European Union.

Britain has always had an ambivalent relationship with Europe, which is in part fueled by patriotism and Britain’s celebrated history as an empire, according to Street. This kind of nationalism is what makes Britain less willing to be led rather than lead.

Though the Brexit issue cannot be split between the traditional ideas of liberal vs conservative, as members of both parties stand on either side of wanting to leave or remain in the European Union, according to Street.

Actually, a stark way to distinguish sides of the Brexit political spectrum would be by age group. In fact, about 82 percent of 18-24 year olds would vote to remain in the European Union in a second referendum as opposed to around 66 percent of 65+ year olds who would vote to leave, according to a BBC survey.

Megan James, a first-year student at the University of East Anglia, had multiple friends attend the protests in London on March 29 and signed the online petition to hold a second referendum. James was not old enough to vote in the 2016 referendum, and described her frustration of having the older generation decide her generation’s future for her.

“I feel with young people, you’re thinking about your future and how the world’s getting more connected. Meanwhile, we’re just taking ourselves out of the EU. Let’s get rid of free trade. Let’s get rid of free movement, and make it harder for ourselves,” said James. “With older people, it seems like ‘oh, let’s just go back to how things used to be and we’re going to save the country’ even though we’re the ones that will have to deal with it when Brexit actually happens.”