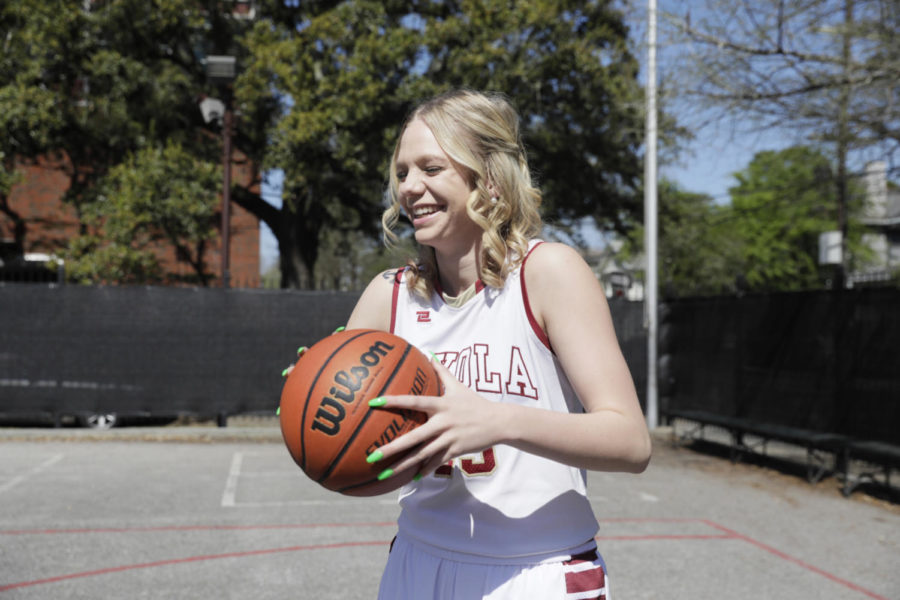 Psychology senior Megan Worry (23) found success on the defensive end of the court in her final two years at Loyola. The senior earned her name in the record books after a historic career.

After four years of swats and boards, one star baller is saying goodbye to the Wolf Pack with her name in the record books.

In her final season in maroon and gold, psychology senior Megan Worry proved to be a defensive leader for the women’s basketball team, leading each stop, press and coverage throughout the season.

“Coming in freshman year, I knew I would have to play a big part for the team, but I never expected myself to make the impact I did this year,” Worry said.

Worry hangs up her sneakers as Loyola’s all-time leader in blocks with 134 rejections. Her 68 blocks this year was nearly double the amount totaled her junior year.

Despite her talent on the defensive side, being a part of history was never on her mind.

“If you asked me my freshman year if I would be in the record books here at Loyola my answer would be no,” Worry said.

It was not always easy playing on such a high level. Worry said she struggled with the game her freshman year, but Head Coach Kellie Kennedy helped boost her confidence.

“I have developed my defensive game in many ways. I have become stronger and faster. Therefore, allowing me to move my feet quicker and stay in front of people,” Worry said.

Despite her accolades, Worry was not always a strong defensive player. She was a guard for about a year with the Wolf Pack, but she moved to stretch forward for the past three seasons.

“My play style has changed from when I was in high school to now. I have to be a consistent rebounder. I have learned to take the ball to the hole more instead of just being an outside shooter,” Worry said.

Rebounding is something the Texas native does well. The senior was second in career rebounds among active players last year and was still at the top for her final season. She is also 7th in Loyola history for career rebounds.

“My game has visibly changed so much since I first started here. Coming in, I knew that I had many things to work on, but looking back I have improved on areas that I didn’t even know I needed,” said Worry.

Worry has improved her game from freshman year and her stats show it.

“I try and lead my team by example. Since I am a senior I do believe that some of the younger ones look up to me and see what I do with myself and how I handle situations,” Worry said.

During her early years, she looked up to Caroline Gonzalez, A’17, who was a stretch forward before her. Worry said Gonzalez was a good rebounder and could shoot the ball well, which were both aspects she wanted in her own skill set.

“I knew it would be some big shoes to fill but I wanted to take on the challenge, which in my opinion I think I did well,” Worry said about taking Gonzalez’s position.

Out of the National Association of Intercollegiate Athletics, Worry is ninth in defensive rebounds per game and 11th in total rebounds through 33 games this season.

Her efforts also won her an All-American honorable mention.

“It is such a crazy thing that I have accomplished so much at my time here and I couldn’t thank my teammates and my coaching staff enough for the opportunities they gave me all throughout the year,” Worry said. “It has been a blessing playing here and I would not have wanted to share all of our accomplishments over these last fours years with any other senior class.”