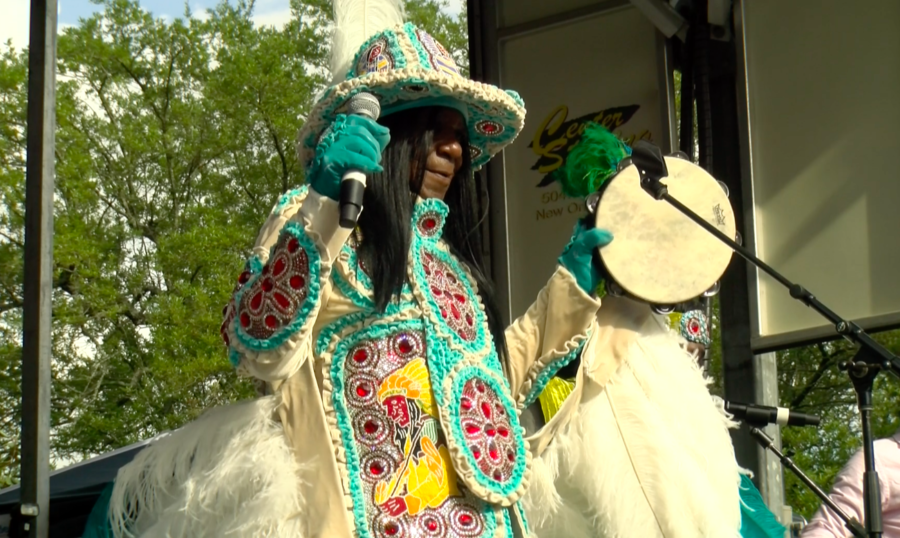 Music, food and a nod to history – that was the theme of this weekend’s Congo Square New World Rhythms Festival.

“This festival is a celebration of the African diaspora and its connection to New Orleans,” said Kia Robinson, marketing and communications coordinator for the New Orleans Jazz and Heritage Foundation. “Right here in Congo Square, which is pretty much historic, sacred ground where slaves gathered. We come here to commemorate those times and remember our ancestors that were here before us.”

That commemoration took place March 30 and 31 at Congo Square in Louis Armstrong Park. Jazz and funk music and the smells of traditional New Orleans cuisine filled the air as Mardi Gras Indian tribes “battled” in a show of cultural unity and local craft vendors displayed their labors of love. And festival attendees came from as far away as Canada to catch a piece of the action.

Canadian Pierre Hamilton visited New Orleans with friends for the weekend. Hamilton said they stopped by the festival to get a taste of the New Orleans you won’t find on Bourbon Street.

“We wanted to make sure we came and had a real part of New Orleans,” Hamilton said. “I was like ‘I wanna find if there’s a (Mardi Gras) Indian battle or second line – how do we do that?’ And it just so happened that when we were looking it up, there was a festival at Congo Square, which is a place I wanted to come.”

Mobile, Alabama native Sara Wesson happened to be in town visiting friends Saturday. She and her dog Benny stopped by the festival not knowing exactly what to expect.

“I think it’s important that we continue doing these free festivals for the community,” Robinson added. “A lot of people aren’t able to visit Jazz Fest, for either financial reasons or geographical reasons, and this particular festival is just a bit of a taste of Jazz Fest.”