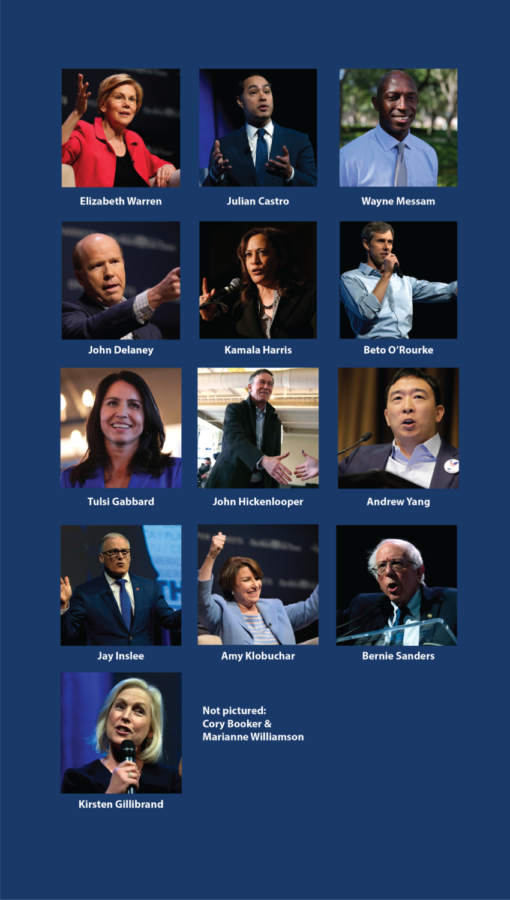 Although the 2020 presidential election remains 19 months away, the rhetoric and energy surrounding the Democratic primaries have already begun to take center stage in political conversation. With an announced slogan of “Keep America Great!” Republican candidate, President Donald Trump seems to be gearing up for another election reminiscent of 2016.

The 16 Democratic campaigns announced does seem to parallel the large numbers of Republican nominees the 2016 presidential election hosted, but, while some fear the large number will lead to fracturing within the party, Dylan Ritter, political science freshman and president of the Loyola College Democrats, is optimistic about the strong numbers.

As for what he thinks will make a candidate strong, Ritter is looking for relatability, honesty, and a genuine interest in policy, all traits that may make a political cynic scoff. While the list of candidates does flaunt well-known names, such as the ‘B boys’ — Bernie, Biden and Beto — lesser-known Democrats are also joining the fray.

“One of the things that we learned from the Obama campaign way back in 2008, which feels like so many years ago, is that he started out as a non-entity,” Roger White, political science professor, said. “But very quickly he moved forward. Hillary Clinton was a front runner in 2008 because she had high name recognition but he was able to defeat her in the primaries because he was the right person at the right time.”

Both White and Ritter agree an emphasis on economics is imperative for Democrats in 2020. In 2016, President Trump notoriously won over rural, blue collar areas such as West Virginia, West Pennsylvania and Minnesota, which proved to be a major factor in his electoral success. For Democrats to have a shot at the White House, those voters will have to be a priority.

“I think equity and the economy are so important and that’s like the biggest thing right now,” Ritter said. “People feel so dissatisfied with their current economic status right now, they feel like they’ve been forsaken by the companies that they work for. They feel they’re working too hard for how little they’re being paid. All that discontent is being built into a very populist movement.”

It’s candidates like Bernie Sanders and Beto O’Rourke who are tapping into that movement, according to Ritter.

Whether or not either candidate will resonate with the discontented electorate in the rust belt and across rural America will undoubtedly be apparent the closer the Democratic primary looms.

“President Trump is using big data. He has the reputation of being narcissistic and spontaneous, but actually he has people working for him who are mining data and finding patterns,” White said. “A lot of his messages that seem obnoxious to a lot of voters are actually carefully tailored towards the discontented electorate.”

Another pivotal piece in the Democratic primary puzzle is a unification of the party, White believes. He said President Trump has already acted as a source of unity for the Democrats, but seeing that unity into the primary will be imperative.

That, according to both White and former President Richard Nixon, is where moderate voters are drawn into the mix.

“The question is whether or not you can win without moderate voters, and I don’t see how you can. My suspicion is if they nominate a far left candidate that will just help get President Trump reelected,” White said.

For Ritter, it will also be important for Democrats to stay unified in the months following the primaries and leading up to the presidential election, unlike in 2016 when many Sanders supporters did not vote in the election. Even if his nominee does not earn the nomination, Ritter will remain loyal to the party.

“(Bernie) is who I’m looking at and who I think a lot of young people are looking at,” Ritter said. “You ask students all around Loyola who their 2020 presidential pick is and they’ll say Bernie or Beto. Those are definitely the two biggest names and I think a lot of people like them.”

For White, however, it’s too soon to hypothesize as to who will win the spot against President Trump.

“In a campaign, it’s kind of like March Madness,” White said. “Anything can happen, so you have to be careful of sideswipes.”