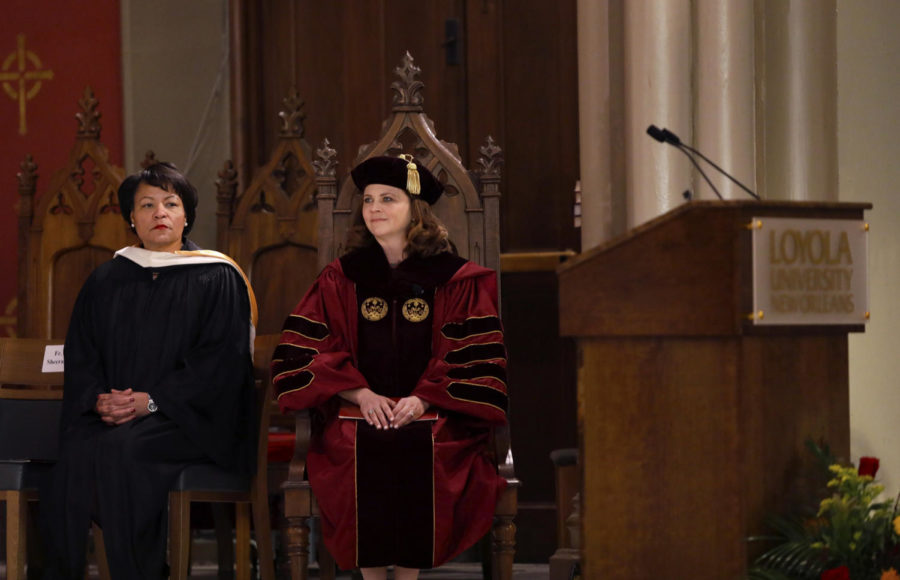 University President Tania Tetlow and New Orleans Mayor LaToya Cantrell sit together during Tetlow’s inauguration last fall. Tetlow was in charge of recruiting speakers for the upcoming Women’s Leadership Academy -- one of whom will be Cantrell. Photo credit: Angelo Imbraguglio

When people picture leaders, many would picture a suit and tie. Loyola will be trying to change that image into one of a pantsuit too.

Starting April 16 and running through Jan. 21, 2020, Loyola will host a series of courses designed to help develop and train female leaders.

The Women’s Leadership Academy is being launched as part of the university’s efforts to relaunch professional and continuing studies programs at the university.

University President Tania Tetlow, the first female president of Loyola, noted a number of trends that indicate a need for this type of academy.

“We know that there’s a need because when we look out at the city and the region and the country only about 5% of Fortune 500 companies have women CEOs for example, and that number has been dropping in recent years,” Tetlow said.

The courses will feature a number of accomplished speakers, including New Orleans Mayor Latoya Cantrell and former Senator Mary Landrieu among others. Tetlow said she got immediate yes answers from all the people she asked to speak.

“I think for every woman who has succeeded, there is the hope to help put the ladder down and make it easier for the next generation and we tell ourselves that, whatever we struggled with, that we are making it that much simpler for our daughters and granddaughters,” Tetlow said.

Tetlow said Director of Professional and Continuing Studies Rachelle Matherne spearheaded the creation of the academy.

Matherne said the idea was approved in October 2018 and one of the first things she did was form an advisory committee about how to implement it.

“It’s incredible that we have been able to launch a program of this magnitude in such a short turnaround time,” Matherne said.

The speakers will start off the day speaking to all the participants. Then they will break into micro-learning sessions related to the day’s theme. Themes include topics such as ‘Your Leadership Style” and “How Stress Impacts You.”

Much of the training is based around the Myers Briggs Type Indicator Test. This training attempts to help people discover their own leadership style, according to Matherne.

Part of Matherne’s job is looking for gaps in regional education and she said she noticed a gap in education that this academy could help fill.

“Although there are a lot of leadership programs currently in the region and throughout in the state, there are none that focus solely on women,” Matherne said.

The academy will last 10 days with most sessions being roughly a month apart from each other. Eight of the ten are full-day sessions which will last from 9:00 a.m. to 3:00 p.m.

Outside the sessions, participants are expected to complete monthly one-hour meetings with their assigned mentor as well as various reflections on the lessons they learned.

Tetlow said the academy is part of Loyola’s increase in offering lifelong education to the community through non-degree training. Matherne said she was brought in on May 7, 2018 as part of the effort to relaunch the department which was part of the Project Magis, a strategic planning process that hopes to bring the university to a place of financial stability.

The Academy will have a maximum of 42 participants according to Matherne. Tuition for the academy runs $2,995, though a limited number of scholarships are going to be offered to applicants working at non-profit institutions.

Nearly one-third of the applicants work in the health care field so far. Other industries represented by applicants include education, construction, utilities, banking and media.

One of the reasons this program and others are being created is to help diversify the schools revenue sources. Tetlow said the goal is to make it so the school is less reliant on any one source of revenue like undergraduate tuition.

“It is healthier for us to have lots of different sources of revenue and that includes thinking about new graduate programs, of our efforts in online education and continuing education,” Tetlow said

Several other courses are currently being planned, including programs designed to train tour guides, business grammar courses, notary public preparation and a course on nonprofit fundraising and grant writing.

Matherne said the plan is to run the Women’s Leadership Academy once per year and they are still trying to recruit faculty for the programs. The goal is to have as many current Loyola faculty and staff to teach the various modules as possible.

Tetlow said a goal of this course is identifying how women are holding themselves back, but that is only part of the problem. Ultimately, the world needs to change too in order to counter the lack of women in leadership Tetlow said. One example Tetlow identified to support this was negotiating for salary.

“We talk a lot about how women don’t negotiate as much for starting salaries which is true on average,” Tetlow said. “What we don’t talk about enough is that research shows that women who do negotiate for salaries often get punished for doing it. They are seen as less trustworthy, less loyal.”

Tetlow said she hopes this course provides people with good leadership training and helps them overcome obstacles to their success.

“If half the talent of the world is contained in women, we cannot risk squandering it,” Tetlow said.