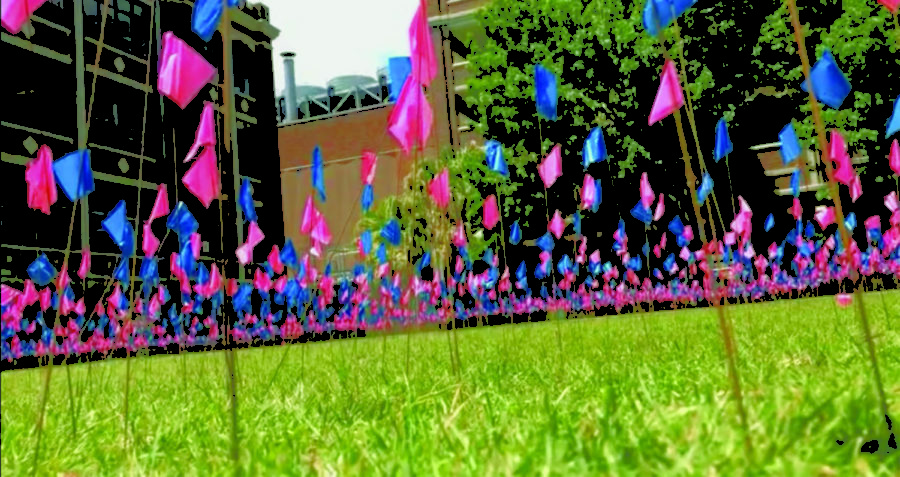 2,000 blue and pink flags wave in the Peace Quad as part of Wolf Pack for Life’s display to spread awareness of the number of abortions carried out each day in the U.S. on April 23, 2018. When the display showed up on campus, it was the source of much controversy. Photo credit: Anna Knapp

College campuses are known for an open exchange of ideas and expression, however, the question still is raised on whether it is like this for all students.

According to Loyola Law School Los Angeles professor Jessica Levinson, the order solidifies what is already being done on college campuses by allowing for freedom of speech. However, Levinson believes that the intent is to benefit conservative students and speakers.

“President Trump and other Republicans have pointed to a couple of incidents where conservative speakers have been essentially run out of their speaking engagements and said, ‘Conservative students don’t have free speech on campus, we need to change that,” she said.

One Loyola student who believes the executive order will be good for campus is biology and physics freshmen Grace Somerville. For Somerville, she has noticed that many times conservatives are left out.

“Since the 2016 election, at school I have seen constant groups being outspoken about feminism, LGBT rights, tables to sign petitions against the current United States administration but I have never seen (on Loyola’s campus) a conservative leaning group having a table or putting up flyers,” she said.

Somerville also feels that she is unable to openly talk about topics she is passionate about without fear of being harassed. One example Somerville gave was the Memorial of the Innocents done by Wolf Pack for Life, where 2,000 flags are planted in the ground representing the amount of abortions done in a day.

“On other campuses when people do table conservative things or even have the (Memorial) of the Innocents, people always come up and harass them and even get violent,” she said. “They don’t just walk away and roll their eyes like we do to them.”

Somerville isn’t the only one who feels this way. According to a survey done by the Knight Foundation/Gallup, only 69 percent of students on college campuses believed that conservatives were able to speak openly and freely about their beliefs.

Moving forward, Somerville hopes that the executive order will change some things on campus.

“I have met so many people who have had professors just tell the class their agenda and just unprofessionally rant about political things to their students,” she said. “The conservative students, including myself, feel uncomfortable the whole class period because I came to learn about one thing and yet my professor is bashing me and my beliefs without even knowing it.”

For Levinson, she believes that this executive order could provide diversity of thought to college campuses. However, she also said that it goes against what the First Amendment says.

Despite this, Levinson said it is way too early to tell if the executive order will cause any major changes to college campuses.

“To the extent that it’s merely redundant, no,” she said. “To the extent that if the federal government decides to aggressively apply this and go to more liberal campuses and say ‘You don’t have enough Conservative speakers. That’s not true free speech,’ then it could change things.”

At the end of the day, Somerville just hopes that this order will allow for more open and respectful discussions on campus.

“Everyday I witness something that just shocks me and all I do is keep walking and don’t engage myself because most of them are never open to a civil discussion, where if we are outspoken they can not just keep walking, they have to yell their opinion and it is very annoying,” Somerville said. “If I respect you, please respect me.”