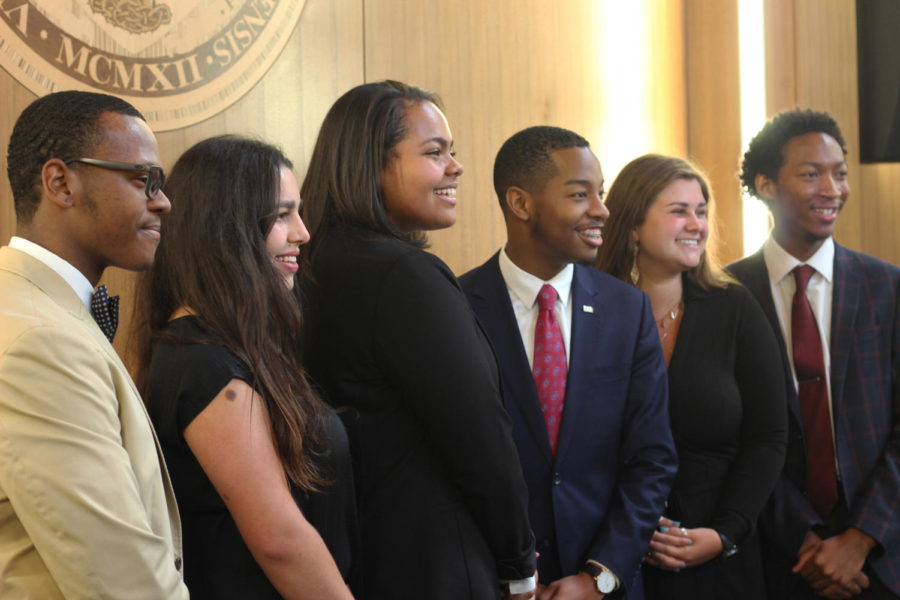 SGA’s executive branch is inaugurated in Thomas Hall on April 10th. The administration is still without a Director of Communications for the 2019-2020 school year. Photo credit: Cristian Orellana

The Student Government Association is sailing full speed ahead, despite one cabinet pick facing scrutiny for not meeting their required experience to hold the position and another appointment declining the position completely behind SGA President Jessamyn Reichmann and Vice President Freedom Richardson.

Reichmann, Richardson and the rest of the cabinet were inaugurated April 10.

“After everything was kind of officiated on the 10th it really did sink in like ‘Woah, okay, I am the President,’” Reichmann, sociology junior, said.

The first thing on Reichmann’s agenda is filling the cabinet position of director of communications. Originally Reichmann and Richardson had presented mass communication junior Lily Cummings as their pick for the position, however, following the Senate confirmation Cummings declined the position because of other outside obligations.

“Lily was the only individual who did apply originally, but as time went on she actually got the job working as the senior director for the Donnelly Center. So on top of that and taking other advanced fourth-year courses she realized her time availability was different from what she had originally put on the application, so she decided to decline the position,” Reichmann said.

This switch up hasn’t shaken up the cabinet, however. Over the Easter holidays, Reichmann said three more students applied for the position and the university should expect a new appointee announcement in the coming days. And, both Reichmann and Richardson agreed that Cummings set the tone for the level of excellence they are looking for in candidates hoping to fill the position.

Once a new director of communications has been selected, an emergency Senate session will be called to confirm the new cabinet member, Richardson said.

As for the other members of the cabinet, it is Zontre City, digital filmmaking sophomore and the administration’s chief of staff, who Reichmann and Richardson are hailing as the “ship captain.”

“Having known him prior to going into SGA and seeing the legacy he has already started at Loyola despite being only a sophomore is astounding,” Reichmann said. “His networking skills, his response time to emails and just the way that he maintains and manages himself as well as anything he is involved in really put faith in me putting him in the team.”

And with only several members of the cabinet toting prior SGA experience, Reichmann and Richardson see their cabinet as an opportunity to rebrand what student government means.

“Despite us all majority being new to SGA,” Reichmann said. “It’s really nice to have people like Freedom and Alejandra (Bedoya) who are like ‘Okay, here are the ropes. This is basically the way the government works.'”

One member of the cabinet who has faced scrutiny for their lack of experience in SGA is finance junior Brette Baughman who will serve as director of programming.

Baughman’s appointment faced senate debate when it was acknowledged that she failed to meet the bylaw requiring a director of programming to have held a leadership position on the University Programming Board for at least a year prior to appointment. The senate ultimately struck down the bylaw indefinitely to allow Baughman to join the rest of the cabinet in their inauguration.

It is that cabinetwide “fresh breath of air” that Reichmann and Richardson will attempt to harness in order to rebrand the SGA culture on Loyola’s campus.

“We want to make sure SGA isn’t just about what’s happening downstairs in the Hub, it’s about the people on campus experiencing and feeling that true support,” Reichmann said.

One way the administration plans to do just that is by finding new ways to reach out to students. “Intentionality,” was a word repeated by both Reichmann and Richardson , as was the idea of “old fashioned politics,” a method that involves simply approaching another student face to face.

“I think at Loyola we tend to overlook that we are a small university,” Reichmann said. “We aren’t (Louisiana State University) or Tulane, we can walk across campus and see 20 people we know, so why not reach out to those 20 people and have them reach out to others, and make things seem like hey, this is really a community gathering.”

That face-to-face experience is something that Richardson thinks has been lost by the SGA in the past, and he thinks it is a strategy Reichmann is perfect for.

“I think right now what is impaired in our student government is that there is a greater focus on the government association as opposed to the student,” Richardson said. “I think her ability to personalize and engage with folks in a way that is warm and well received and being able to incorporate that into our vision to make sure that everyone can live their best Loyola is incredibly important. Because Loyola means something different to each and every individual.”

While many students grind through the last several days of classes and exam week in attempts to reach the summer break, Reichmann and Richardson are already looking to the fall.

“It’s really easy to step into a position and do what’s already been done,” Reichmann said. “But to look at it and say ‘Hey, this is where I want to take it and this is where it has already gone,’ that’s what I want to see from each and every person going forward.”