Think of the kids, and stop buying Madden 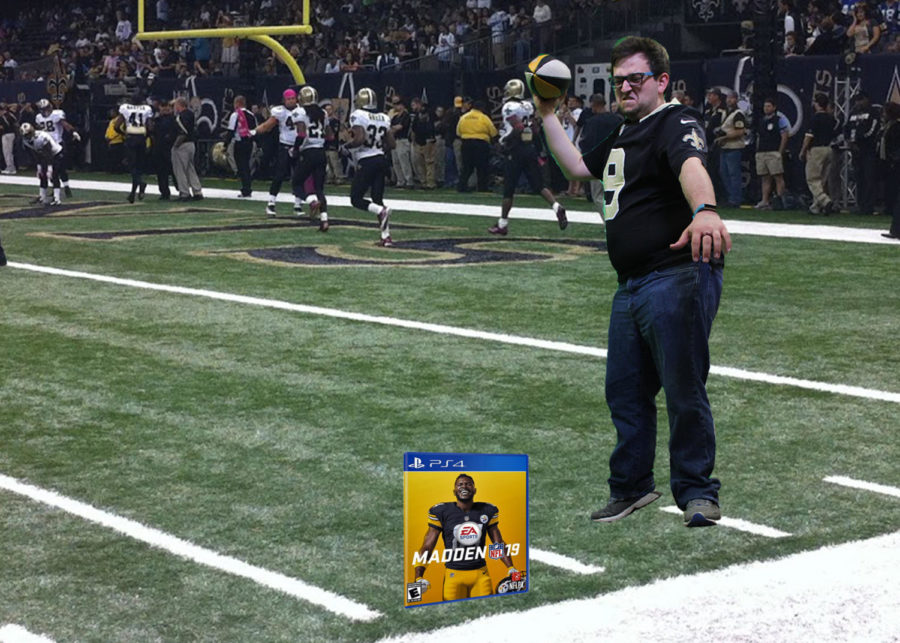 Stop me if you’ve heard this before. The score is 24-21 in the fourth quarter, you’re down by a field goal, but you’re driving and in opponent territory. It’s 3rd and 15 so you know you need to pass, but if you don’t make it, whatever. You have a kicker who can tie the game.

If you are a fan of football, you know that isn’t how fumbles or forward passes work. So why does the only NFL-licensed game on the market not understand the rules of the game?

The cracks have set in on ‘Madden,’ a franchise older than some of our readers, including me. Because of that, the game has had to reinvent itself many times over the years. But in the current era of PS4 and Xbox One games, the series is in its worst state yet. The broken game engine, the lack of new features and the cash-cow game mode Ultimate Team are, in my eyes, the reason the game is so bad.

In 2013, ‘Madden’ released its first entry on current generation platforms, the Xbox One and Playstation 4. With it, a new game engine called Ignite was born. It was marketed as a game engine that would make sports games feel alive. Instead it was riddled with bugs and inconsistent physics.

After only four years, Ignite was shelved and replaced with the Frostbite 3 engine, a proprietary EA engine that was initially made for shooters like Battlefield. I don’t know about you, but when I think about football, I can’t help but compare the team sport to a gritty war simulator with guns and explosions. (p.s. I understand there are more complexities to game engines and adapting them to actually making a game function, but ‘Madden’ plays like a pile of hot garbage so you’re going to have to go with me here.) Since ‘Madden 25’ in 2014, each entry has degraded in quality as the developers build higher and higher on a rotten foundation. But with the Frostbite 3 engine, the failures up the ante. It just simply does not work. I relate playing ‘Madden’ to playing a racing game where every sixth or seventh time you steer right, your car inexplicably turns left into a wall. You wouldn’t play that game so why do you play ‘Madden’?

I could go into a thousand different examples of how the game fails to be a football game, but instead, I will point you to the Instagram account @sloppymaddenplays. There, you can find countless user-submitted videos of the game absolutely destroying itself.

One of my biggest personal problems with ‘Madden’ is complacency. The franchise mode where you take the role of owner, coach or player and bring your team to the Super Bowl is the only mode I care about. I like the idea of taking an NFL team and building a dynasty over years and years of in-game seasons. For years, franchise mode has been widely neglected, with very few features being added every year. When die-hard fans of franchise mode asked EA for less game scripting (as in, the outcome of certain plays or even entire games being predestined before playing) or a meatier create-a-character mode, the company added cutscenes of your coach walking around in his office as a background to the main menu, a feature that adds nothing to gameplay or immersion.

Franchise mode’s complacency has widely been a result of an emphasis on Ultimate Team, a competitive, online game mode that allows players to buy virtual card packs through microtransactions. These packs unlock players ranging from third-string kickers to all-time-great players like Bo Jackson or Lawrence Taylor. On the surface, the game mode sounds great. Who doesn’t want to create a dream team of players they grew up watching as kids? But if you look a little deeper, you’ll see that players are spending loads of money on randomized card packs, essentially the same as loot boxes (a concept some countries consider gambling). To me, that’s fine. If you want to spend all your money on a team you can’t take with you when the next game comes out, that’s your decision. But when you spend all this money on a game, the company that makes it is less motivated to fix the game-breaking bugs. And when the company is making an estimated $650 million off this game mode alone, AFTER the fact that players already spend $60 to get the game in the first place, why would they fix anything?

Now you might ask, “Why haven’t you stopped buying these games if you hate them so much?” I have. ‘Madden’ is no longer a game worth my money, and I implore you to vote with your wallet when ‘Madden 20’ comes out. Do not buy the game. Do not reward EA for phoning it in each year. I know it will not be easy, especially because there is no alternative to ‘Madden’ due to exclusivity rights with the NFL. But I would rather go a few years without playing a game that consistently makes me want to throw a controller through my wall to get a better product than…you know, buy a bad game every year that makes me throw that controller through the wall.