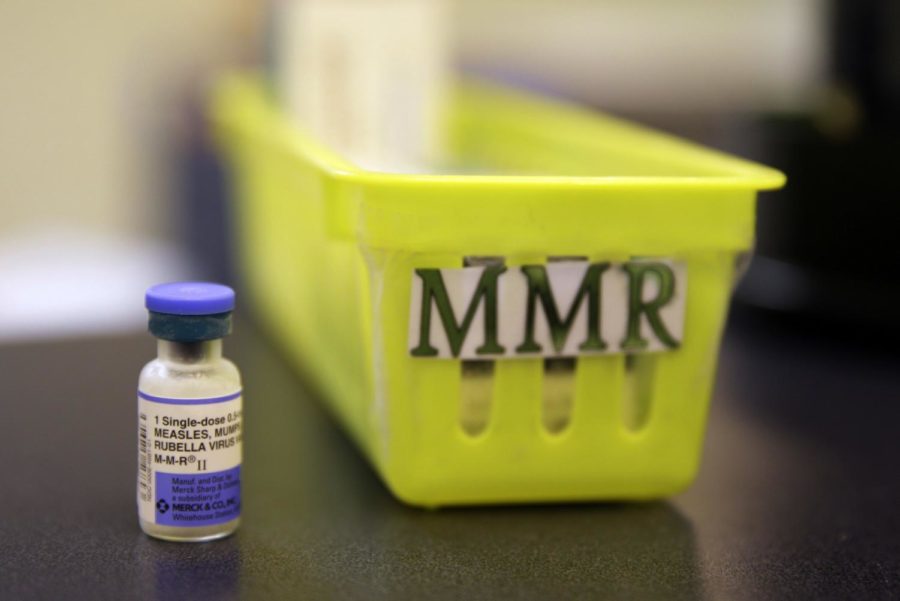 FILE - This Feb. 6, 2015, file photo shows a measles, mumps and rubella vaccine on a countertop at a pediatrics clinic in Greenbrae, Calif. Hundreds of opponents of mandatory vaccines are opposing a California proposal to give state public health officials instead of local doctors the power to decide which children can skip their shots before attending school. They plan to pack the first legislative hearing Wednesday, April 24, 2019 on a bill that proponents say would stem bogus exemptions granted in many cases by doctors who are paid to excuse students from vaccinations. Supporters say pockets of unvaccinated students help to spread measles. (AP Photo/Eric Risberg, File)

Medical professionals across the nation are warning of the impending dangers of measles as the disease nears a record-high since being declared eliminated in 2000.

The US Center for Disease Control and Prevention announced that the number of measles cases in the nation reached 626 in 22 states as of April 22, just shy of the highest number of reported cases at 667 in 2014.

According to Martha Sharan, public affairs specialist for the CDC National Center for Immunization and Respiratory diseases, the rise in measles prevalence is a result of a trend of infants not being vaccinated.

“We are seeing an increase in the number of children younger than two years of age who receive no vaccines,” said Sharan. “This increase means that there are about 100,000 children under two years old that are not protected against potentially serious vaccine-preventable diseases.”

According to the CDC’s Morbidity and Mortality Weekly Report, 1.3 percent of children born in 2015 had not received any vaccinations by the 2017 National Immunization Survey-Child. That indicates a significant upward trend since 2001 when that number was 0.3 percent.

The spread of measles is due to the highly contagious nature of the disease, according to Sharan.

“It is so contagious that if one person has it, up to nine out of 10 people around them will also become infected if they are not protected,” said Sharan.

The most effective protection against the disease is the MMR vaccine which after two doses in childhood will protect an individual for life, according to the CDC.

According to Sharan, the importance of vaccinations reaches beyond a single individual and choosing to not get vaccinated may be life-threatening to those around you.

“When you get vaccinated, you also protect others around you who are at high risk for complications but can’t get vaccinated because they are too young or have a health condition,” said Sharan.

Measles symptoms may include fever, cough, runny nose, watery eyes and a rash of red spots. If you or someone you know is suffering from these symptoms, the CDC encourages that you see a doctor immediately.