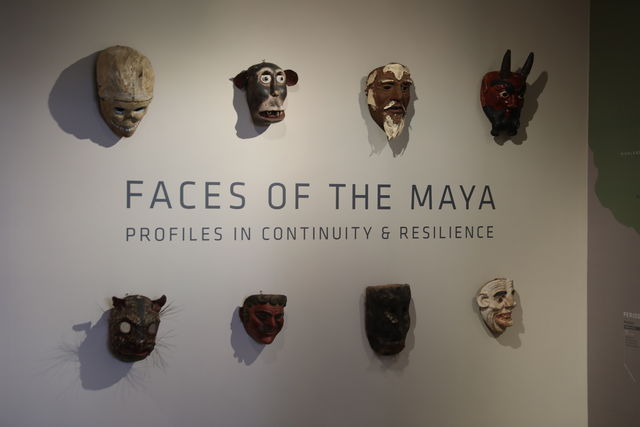 Mayan masks, both ancient and modern, line the wall of the MARI gallery. The gallery is open to the public for anyone that's interested.

With both campuses so close to one another, there is no doubt some sibling rivalry that exists between the Green Wave and the Wolf Pack, but when both schools aren’t arguing over basketball teams, dining halls or uptown bars, they are coming together to study and appreciate ancient cultures.

Since 1924, the Middle American Research Institute has been one of the nation’s magnifying glasses into Mexico and Central America.

“It has been at the forefront of research in that part of the world on those topics, archeological, anthropological and linguistic,” director of the institute Marcello Canuto said.

MARI has gone as far as to open up a public gallery after a 2012 renovation to better showcase the life of the Maya both in the past and the present. The exhibit, located in Dinwiddie Hall, displays the everyday life of one of the world’s oldest peoples.

“We decided, (to do) an exhibit on the Maya and actually enforce the notion of continuity and resilience, rather than the end of the world and destruction,” Canuto said.

With their doors open to all visitors, Spanish and Latin American Studies professors at Loyola have taken advantage of the easy class trip. The relationship between the institute and the classes at Loyola have grown to not only the occasional visit but an internship program for their students as well.

“If there’s an interest with what we have here, at Loyola, then great. I’m all for it,” Canuto said.

Outreach Coordinator Borislava Simova said that Loyola accounts for nearly one-third of the gallery’s total visits, making it a welcoming environment for students interested in learning about the culture or even museum curation.

Loyola senior Sierra Carvahlo enjoys the hands-on projects she gets to do while interning at the MARI Institute, such as creating educational materials for interested visitors.

“There’s a lot of flexibility and creativity with what I can do, so it’s not just filing papers,” she said.