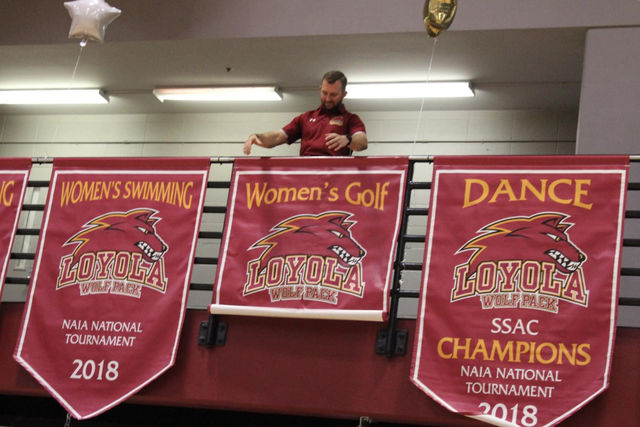 Banners were hung for the dance team, the women’s golf team and both swim teams at Senior Night on Feb. 14 2019 for competing nationally last year. The Directors’ Cup judges based on a school’s national performance.

As the campus blossoms with life once again after Spring Break, the Loyola athletic department will have the difficult task of designing and ordering a championship banner for the conference title-winning women’s golf team.

The department has to answer questions such as: where would they display the banner? Will it sit adjacent to the three other banners that we won in 2019 alone? Should we wait to see if the gold team takes the national crown before ordering a conference banner?

All are questions that need answers, but the question that should also be buzzing around The Den is where Loyola stands in the Learfield Directors’ Cup standings.

The Directors’ Cup is awarded to the school with the most points following the end of athletic competition. Schools earn the points based off of their standings in national play.

Last year, the Wolf Pack finished with a school-high 247 to land in 67th place among other schools in the National Association of Intercollegiate Athletics. The program earned such a high standing due to the successes of the men’s and women’s swim teams, the women’s basketball and golf teams and the competitive cheer team.

And with the summer months rapidly approaching, Loyola is aimed to surpass last year’s point total and perhaps their standings.

Currently, Loyola is ranked No. 43 in the nation with 235 points. After national appearances from both basketball teams, both swim teams and the dance team, Loyola is just 12 points away from earning their highest point total ever, pending on how the golf team fairs after national competition.

The men’s team has the highest point total out of any Loyola team with 75 points after placing fifth at the national meet. The women’s team follows, earning 72 points for their sixth place finish.

After a first-round exit in the national tournament, the women’s basketball team racked up 25 points while the men’s team earned 53 points after reaching the second round for the first time in Loyola history since the 1940s.

And the dance team made a second-consecutive appearance on the national stage, finishing in 12th place and earning 10 points.

Loyola is close to making history for the fourth year in a row, and it all rests on how well the golf team performs and if the track and field athletes can make an impact at nationals.

The final standings do not release until June 6, but the department and its athletes are on the right track to make history once again.