Both tennis teams end their seasons in the conference semifinals 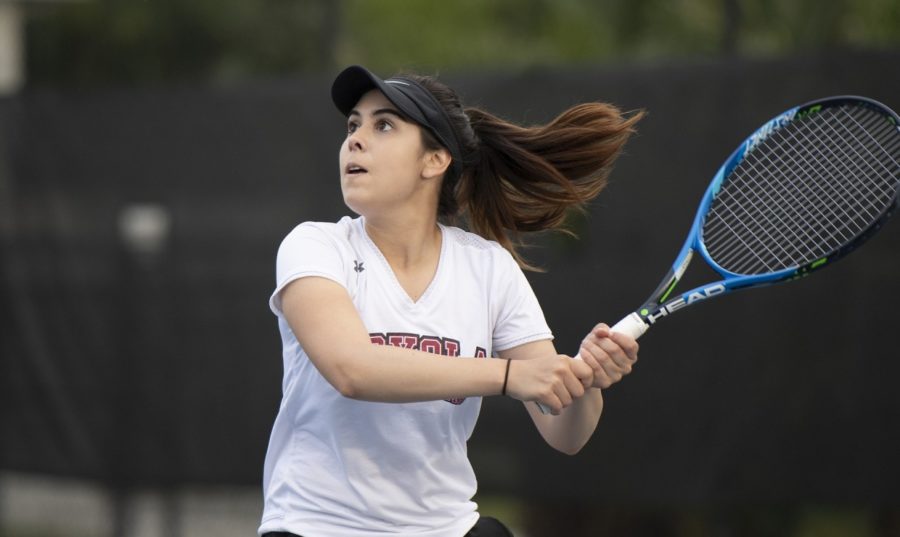 Finance junior Arianna Pepper went 1-6, 6-1, 6-4 in her solo victory in the conference semifinals. Both Loyola teams lost to Middle Georgia in the second round. Photo credit: Kyle Encar

After dominating in the first round of the Southern States Athletic Conference Championship tournament, the Wolf Pack tennis teams hoped to use that winning momentum in the semifinals versus two nationally ranked Middle Georgia squads.

However, with rain delays forcing the match to start with singles play, both Loyola teams saw the end to their seasons with losses to the Knights.

Loyola’s No. 14 women’s team with the No. 7 team in the nation and managed to earn two wins, but could not hold on to gain the overall victory. The Wolf Pack lost 5-2 to the Lady Knights.

The men’s team faced off against No. 4 Middle Georgia and failed to capture a win. The Knights left the Wolf Pack scoreless at 5-0.

Bio-chemistry sophomore Gabrielle Terranova and finance junior Arianna Pepper were the only Loyola athletes with wins on the day. Terranova went 5-7, 7-6 (10), 6-1 in her singles match and Pepper went 1-6, 6-1, 6-4 in her solo victory.

Overall, the men’s team finished the season with a 7-12 overall record and a 3-3 conference record.

The women’s team had a 11-9 overall record and went 4-2 in conference play.