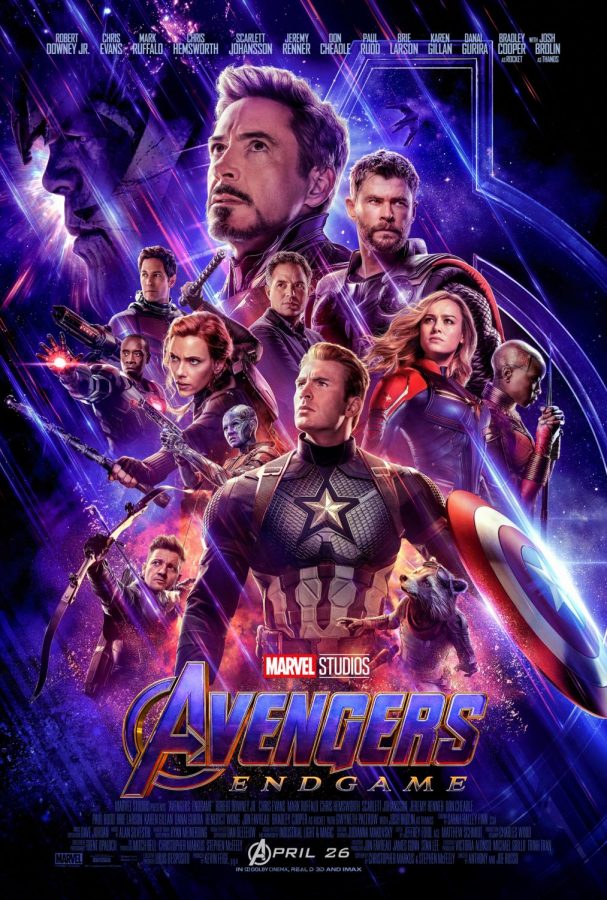 “Avengers: Endgame” is the movie fans have been waiting for not only months but years. This film serves as the best possible conclusion fans could have gotten to this juggernaut franchise. It is going to be discussed probably until the next big Marvel film comes out.

After the events of “Avengers: Infinity War,” half of the Earth’s population disappears due to Thanos (Josh Brolin) using the Infinity Stones. The remaining Avengers hunt him down only to find out the stones have been destroyed leaving them with no hope of reversing their situation. Five years later, the group is given hope by the previously believed dead Ant-Man (Paul Rudd). Ant-Man introduces them to the Quantum Realm, where he was trapped, that could be used to travel back in time. From there, the Avengers’ plan is to go back in time to retrieve the Infinity Stones before Thanos could reach them.

This plot does a pretty good job of being different. The expected move would have been to make it a long hunt for Thanos, but the movie chops that, along with Thanos’ head, right out the window. This time travel plot allows for something different. None of the other Marvel films have used time travel before leaving this film to be unique.

However, it is most important to talk about the two biggest deaths in this film: Black Widow (Scarlett Johansson) and Iron Man (Robert Downey Jr.). To lose two of the original Avengers was heartbreaking. Black Widow’s death was performed gracefully from both Johansson and Jeremy Renner as Hawkeye. The emotion shown was clear that both were willing to sacrifice themselves in order to gain the Soul Stone. But, the most heartbreaking had to be Iron Man’s death. I remember whenever I saw “Iron Man” in theaters all those years ago. That ten-year-old boy would have never imagined Iron Man would provide the ultimate sacrifice to save the world. Regardless of who saw it, every viewer probably got at least a little teary eyed.

This film has provided some of the Marvel Cinematic Universe’s best performances. As mentioned above, Jeremy Renner’s Hawkeye does a good job. Hawkeye has overall been a pretty underdog character. He has been used for either comedy relief or underused. But with “Endgame”, Renner shows a different side of the character. He has lost his entire family and changes dramatically as a character. However, he is by far cooler because of it. The scene of him slaying Yakuza members in Japan was just awesome. The scenario allows for a darker and honestly cooler Hawkeye.

Other mentions also have to go to Iron Man, Thor (Chris Hemsworth) and Nebula (Karen Gillan). Robert Downey Jr. provides probably his greatest performance of the character since his debut in 2008. The film provides a different look at Iron Man as now a father and reluctant hero. He doesn’t want to lose what he’s gained but, in the end, he allows himself to become a necessary sacrifice in some of the most touching and epic scenes in Marvel history. Thor is also given his best performance in this film. The once mighty Thor is reduced to a drunk and obese shell of his former self. We have never seen Thor in this way. But through it, we see his development out of his depression and return to the hero we love. Finally, there is Nebula. I think it would probably be hard to find a Nebula fan before this film. But, afterwards, I think everyone is a Nebula fan. “Endgame” really shows how much she has grown as a character from a cold-hearted assassin to a firm but dependable ally.

Now, no talk of this film would be complete without discussing that final battle. Just when things are looking down for our heroes, the once-dead Avengers join the fight. This scene alone is worth the price of admission. Every hero seen since the Marvel Cinematic Universe’s inception is here together and it is just beautiful. Until the X-Men and Fantastic Four finally join the Marvel Cinematic Universe, there will not be a scene as epic and awe-inspiring as this one.

The amount of fan service in this movie is downright amazing. The time traveling brings the Avengers to the events of three previous movies: “The Avengers,” “Thor: The Dark World” and “Guardians of the Galaxy.” These scenes allow for the return of old characters like Frigga (Rene Russo), Jane Foster (Natalie Portman), Alexander Pierce (Robert Redford), Brock Rumlow (Frank Grillo) and The Ancient One (Tilda Swinton). That’s just mentioning the time traveling scenes. Who in the world would have expected the kid from “Iron Man 3” to make an appearance? This film is definitely a treat for anyone who has been a dedicated Marvel fan.

However, I did have a few complaints about the film. Though I loved seeing all these characters together, I wish more was done with them. If they weren’t a part of the plot before that final battle, they were lucky to get at least a couple lines of dialogue. The pacing of the film also felt off at times. Three hours is a long time for any movie to be. I liked the majority of the film but it wouldn’t have hurt to shave off a few minutes. Scenes like Hulk and Ant-Man arguing about a group of children wanting to take a picture should have been shorter especially when the joke was obviously being stretched.

Despite these few complaints, I believe “Avengers: Endgame” serves as the perfect closing act for the Marvel Cinematic Universe as we know it. Iron Man and Black Widow are dead. Hawkeye and Hulk are retiring from the hero business. Thor seems to be spending some time with the Guardians of the Galaxy. Captain America passes on the mantle to The Falcon (Anthony Mackie). The end of this film and lack of end credits scene allows for us to be left in anticipation for what’s coming next. The franchise is left in the hands of newer characters such as Spider-Man, Black Panther and Captain Marvel. So, instead of a scene at the end revealing some new villain or introducing a new hero, we are left with knowing that the Marvel Cinematic Universe as we know it is over but that the future is brighter than ever.