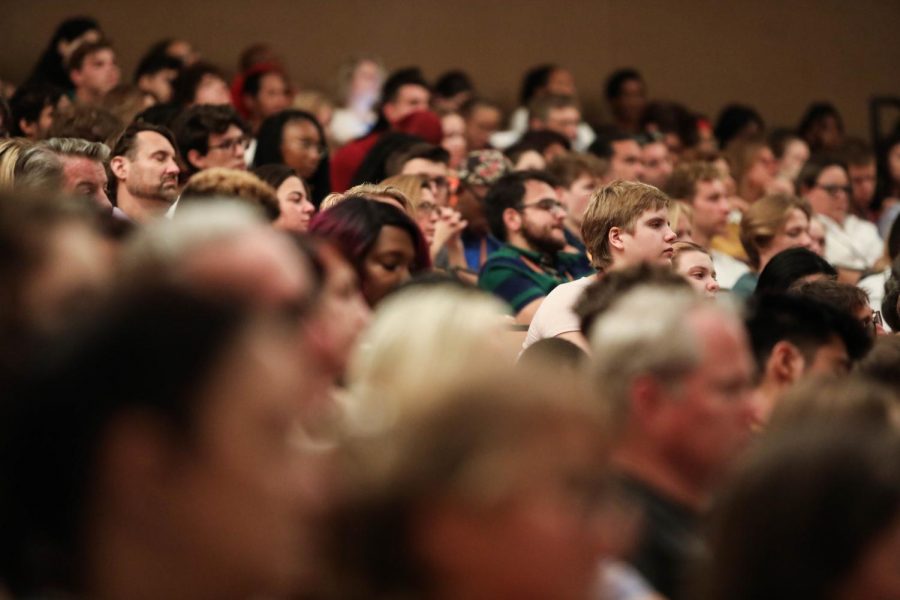 Incoming freshmen and their family members attend a Wolf Pack Welcome orientation in Roussel Hall on Aug. 14., 2019. The first-year class is one of the largest in recent years and has led to discussions about expanding and altering on-campus housing options. Photo credit: Michael Bauer

As freshmen have begun the move-in process, there is one thing the winding line for a Biever elevator has made abundantly clear: the all-freshman residence hall is at capacity.

Nathan Ament, Chief Enrollment Officer for the university, said the school expects to welcome 840 first-year students for the upcoming semester. The large enrollment numbers have pushed the undergraduate student population to 2,883, the highest number since 2013.

“Despite Loyola’s challenges over the last year, prospective student interest increased and there was a significant buzz around President Tetlow and her new leadership,” Ament said.

The freshman class is 78 students larger than last year’s fall freshman class, according to Ament. To accommodate the large number of students, Biever Hall is housing 100 first-year students in triple rooms, something that was started last fall, leading to larger numbers of students on each floor than what has been standard in years past.

Chandler Boudreaux, finance sophomore, is a residential advisor on the sixth floor of Biever and said he is responsible for 52 residents.

“There’s about six more residents than normal on my floor,” Boudreaux said.

He added that residential life implemented policies to prepare for the large number of students moving in.

“The elevators are not a free-for-all this year,” Boudreaux said. “Move-in has also been spread out through the entire week before classes, and the result is more efficient.”

According to University President Tania Tetlow, there have been minor setbacks in housing all students who applied for on-campus housing due to the large class size, but she expects solutions to be found.

“There is one (freshman) student we are still waiting to place, and I’m sure that we will,” Tetlow said in a meeting with The Maroon staff Wednesday. “We were also able to offer housing to upperclass students who wanted it and we are down to about 11 on a waitlist. Almost every upperclass student who requested housing also got it.”

According to Tetlow, the number of freshmen who commited to Loyola was lower than last year’s first-year class until the last minute, which has led to the last minute search for empty spaces.

Throughout the summer, sophomores received two emails from residential life offering housing “cancellation lotteries” that allowed students to cancel their housing and move off campus without penalty in order to free up dorm space.

“It came down to making space for the bigger first year class,” Tetlow said. “We are at the place where we are actively looking into whether we should build another residence hall. We are running out of room.”

According to Tetlow, the university has enough capacity in classrooms and enough parking spaces for the growing undergraduate population, so residential living is what is being addressed as freshmen classes continue to grow.

That is why Tetlow said that the idea of a new residence hall being built is “more than abstract,” it is being discussed.

“There are 50 balls in the air to figure out how to make it happen, but that is my goal,” Tetlow said. “I think it would be good for us to have another residence hall.”

Tetlow also shut down any rumors of sophomores eventually being allowed to live off campus.

“We love having students live on campus,” she said. “It creates community, it’s safer, it engages you all in what we do here.”