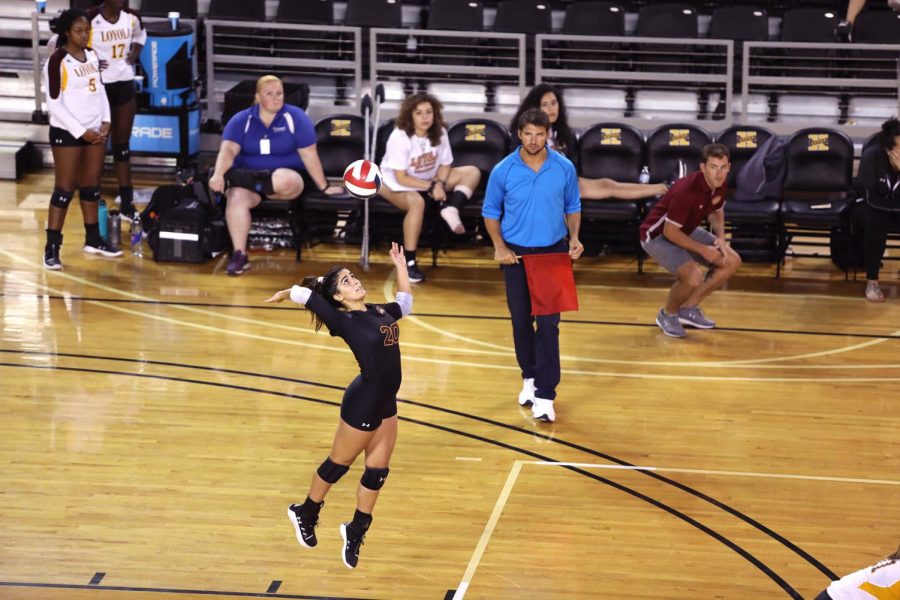 The Wolf Pack volleyball team started off the season with a 1-3 record at the Early Bird Invitational hosted at Xavier University of Louisiana.

The Wolf Pack racked up a win against Cumberland University, but fell to nationally ranked no. 5 Viterbo University, College of Coastal Georgia and Xavier.

Head Coach Jesse Zabal saw positives in the team performance despite the results.

“Overall, obviously we would have liked to have done better,” Zabal said. “Any coach would say that when they come out 1-3, but I think we are excited to have that win against Cumberland and also to know that we competed and went toe-to-toe with the no. 5 team in the nation and really made them earn their points against us.”

Mass communication freshman Brittany Cooper stood out with 20 kills in the games against Viterbo and Coastal Georgia.

The next day, the Wolf Pack captured their first victory of the year in dramatic fashion against Cumberland University. After falling in the first two sets, 15-25 and 12-25, losing each by double digits, Loyola rallied. The team would capture the next two hotly-contested sets 26-24 and 25-23 before capturing their first win of the year in the tiebreaker with a 15-10 final set.

Head Coach Jesse Zabal was happy to get the come-from-behind win against Cumberland.

“It was just exciting to see the fight in them, the commitment and the trust in each other to get it done,” Zabal said.

Sophomore Jordan Bernard led the team in kills for the day tallying 16, eight in each match.

Facing tough competition in the tournament, Zabal feels the team responded well and emphasized it to the team.

“We were just talking to them about how we saw really good volleyball from them in moments and it’s just going to be about moving forward and continuing to work out all the little details to make sure we get that good volleyball consistently,” Zabal said

Cooper was named to the All-Tournament Team for her performance. To go along with the 30 total kills she piled up in the tournament, she tallied 36 digs and five service aces.

Zabal said she knew they would be a strong class with solid talent, but hoped to work on ironing out the little things.

“We are still seeing those freshman decisions and when you come up against really tough teams that they haven’t seen that level of volleyball yet, we definitely see that level of experience come out,” Zabal said. “So we understand it but at the same time we do expect a lot from them and we are hoping to get a lot out of them.”