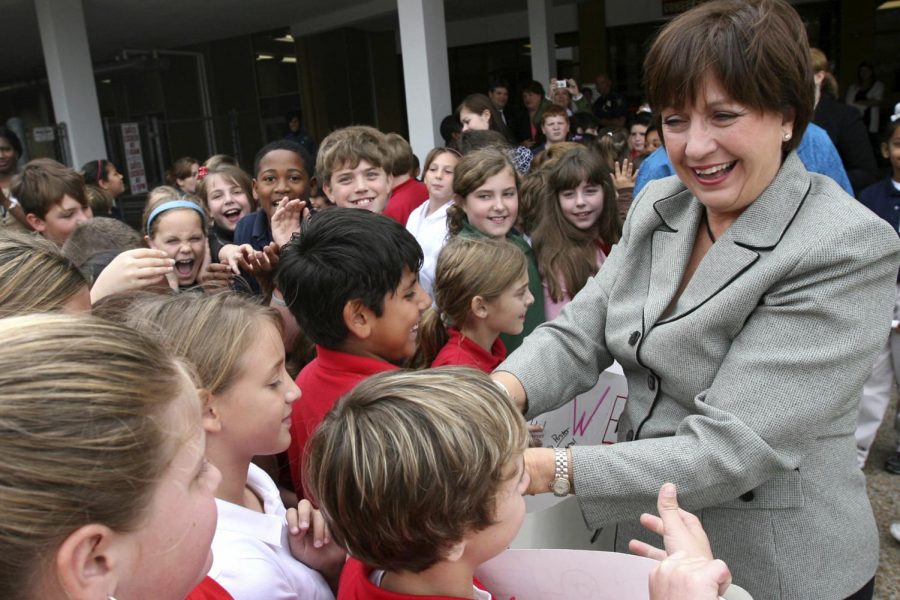 FILE- In this Nov. 6, 2007 file photo, Gov. Kathleen Babineaux Blanco is greeted by students of Maplewood Middle School in Sulphur, La. Blanco, who became Louisiana's first female elected governor only to see her political career derailed by the devastation of Hurricane Katrina, died Sunday, Aug. 18, 2019. She was 76. (Brad Puckett/American Press via AP, File)

New Orleans was not its usual self over the weekend as locals took to social media for commemoration posts, flocked to memorial sites to lay flowers or embraced one another in mourning.

Instead of a joyful tune, the city played the blues, as news traveled of yet another local icon passing away.

The rain fell down Sunday afternoon as Louisiana mourned the loss of former governor Kathleen Blanco and others still felt the pain in their hearts for the death of WVUE-FOX8 anchor Nancy Parker.

Both deaths caught the city off guard and New Orleans is still trying to cope.

Blanco took her last breath on Aug. 18 at the age of 76, after losing her battle with ocular melanoma, a rare, incurable cancer.

Parker was one of two fatal victims that lost their lives after a plane crash on Aug. 16. She left behind a beautiful family at the age of 53.

As New Orleans learns to live with their absences and reflect on their legacies, we can always remember that both women embodied who they were down to their last moments.

Blanco always was a fighter. She was a housewife before embarking on her political career back in 1983, and she never stopped reaching for higher seats.

She was a daughter, a wife, a mother and a grandmother, and that did not stop her from taking the top seat in state government, even with the criticisms.

Blanco fought to evacuate the people of New Orleans after Hurricane Katrina. She hassled the White House for federal aid after the storm and she pushed for Superdome repairs and renovations so the stadium could serve as a symbol of hope and recovery.

And just like her political foes and woes, she fought her disease for as long as she could, never giving up and always showing that Cajun spirit.

Parker was much the same.

Through storms, crime and corruption, Parker was able to remain calm, warm and sincere for the families that watched her newscasts.

She had a welcoming personality that did not go away once you changed the channel or turned off the TV.

She was a mainstay in local journalism, five-time Emmy award-winner and a role model among aspiring reporters, including myself.

She died doing what she did for this city for the past 21 years: telling a story.

It has been a tragic weekend, one that caps off an even sadder summer.

While the families make funeral arrangements for both Blanco and Parker, let’s not forget the other influential members of New Orleans that have impacted its culture, its well-being and, most of all, its people.

And let us try and be as loving, as passionate and as embracing of our city, its culture and, most of all, those that call this place home as those that we have laid to rest.

List of New Orleans icons that passed away this year: