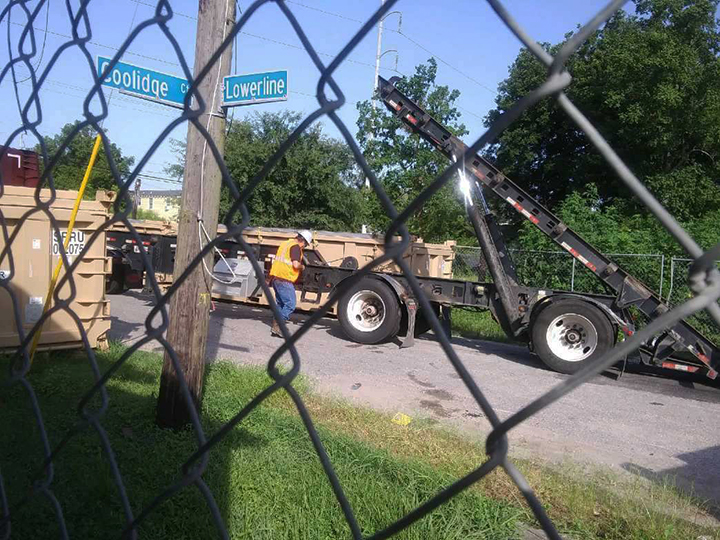 Workers prepare the containers of material for removal from Gert Town. Six large containers were filled with contaminated dirt and left on the side of the street for weeks before they were removed. Photo credit: Issac Cheatham, Sr.

Issac Cheatham, Sr., a 30-year resident of the New Orleans neighborhood of Gert Town, walked outside his home on the morning of June 28 to see workers wearing protective gear digging up the intersection of Coolidge Court and Lowerline Street in front of his house.

“They said they were just digging up for a little radiation, that’s it. They never told us it was dangerous,” Cheatham said.

An unknown amount of the radioactive isotope radium-226 was removed from underneath the road in front of Cheatham’s home. The removal of the hazardous substance was a joint effort by the City of New Orleans, the Environmental Protection Agency and the Louisiana Department of Environmental Quality.

Cheatham and his neighbors were instantly alarmed when they saw the protective gear worn by the workers removing the radium.

“They had their little suits on, they said it’s not dangerous, but then why are you wearing those suits?” Cheatham said.

According to the U.S. Department of Energy, the radiation was first discovered in 2013 during security sweeps in advance of the Super Bowl. Nothing was done about the radiation, however, until current New Orleans Mayor LaToya Cantrell took office in 2018.

In a statement, the mayor’s office said that, “Upon learning of the presence of the underground materials in 2018, this administration took immediate action by notifying residents prior to safely removing the material in close coordination with the appropriate federal and state partners.”

Residents were also upset about how long it took authorities to move the six large containers of dirt and other materials that they dug up out of the street.

“The dumpsters stayed out there almost a month before they came and got them,” Cheatham said.

According to Cheatham, a dumpster of removed material was left right next to his house, where he lives with several family members.

A group of attorneys including Steven Rando, Madro Bandaries and the Bagneris Law Firm are representing Cheatham and a group of his neighbors in a class-action lawsuit against the City of New Orleans and ARS Aleut Remediation, a private company that was contracted to do much of the actual removal work.

“Crews have excavated the site wearing personal protective equipment including disposable coveralls and gloves necessary to limit their exposure to toxins, while plaintiffs and other residents, homeowners and business owners have been exposed to contamination without protection,” according to a statement from the Bagneris Law Firm.

Although it is a civil case, not a criminal one, Cheatham expressed excitement about potentially holding the city and the company accountable for what he believes to have been misconduct.

“The Feds gon’ get them. And once it goes federal, that’s it,” he said.

However, Harriet Clancy, a toxicologist and assistant chemistry professor at Loyola, doubts that anybody was exposed to a dangerous amount of radiation at street level.

“I predict that they will never be able to link any of the illnesses they’re seeing back to that radiation,” she said. “It probably isn’t connected.”

Clancy did say that direct exposure to radium can be extremely dangerous.

“Radium gives off two different main types of radiation as it decays. One is gamma radiation, which is high-energy. It’s like an X-ray but even more powerful than an X-ray,” she explained. “The other is alpha particles. Alpha particles in some ways are more damaging, but in other ways less. They’re more damaging but they don’t travel as far.”

However, Clancy made it clear that because this was a small amount of radium and the alpha particles were contained first by the ground and then by the containers, it was probably close to harmless. “If you laid on that site of asphalt for an hour, it would be kind of like having one X-ray,” she said. According to a NOLA.com report, the highest levels of radiation recorded at the site by the Environmental Protection Agency were about 10 milliRem per hour. Clancy said that if these numbers were accurate, the physical effects on neighbors would be inconsequential.

The residents of Gert Town are concerned about more than just physical damage, though.

“Despite assurances from representatives of the defendant’s city, ARS and governmental agencies, the residents and business owners in the subject area have been very alarmed and have experienced emotional distress regarding their exposure to radioactive materials at the site,” The Bagneris Firm said in a press release.

Another cause of concern for many is the mystery surrounding the source of the radium. Clancy said that the radium “seems to have been to be a natural product that somebody concentrated for a purpose,” but nobody knows where it came from or how long it has been there.

Ultimately, however, Clancy said that the material should not be as frightening as it might seem at first .

“We’ve evolved in the presence of radiation, so our bodies know how to deal with small amounts,” she said. “If I lived there, I wouldn’t be in a panic.”

Cheatham, for one, is not panicking. He said that now that the radium has been removed, he has no plans to leave and tries not to worry too much about its potential effects.

“If it’s gonna cause it, it’s already caused it. You just gotta keep on living and see what happens,” he said.