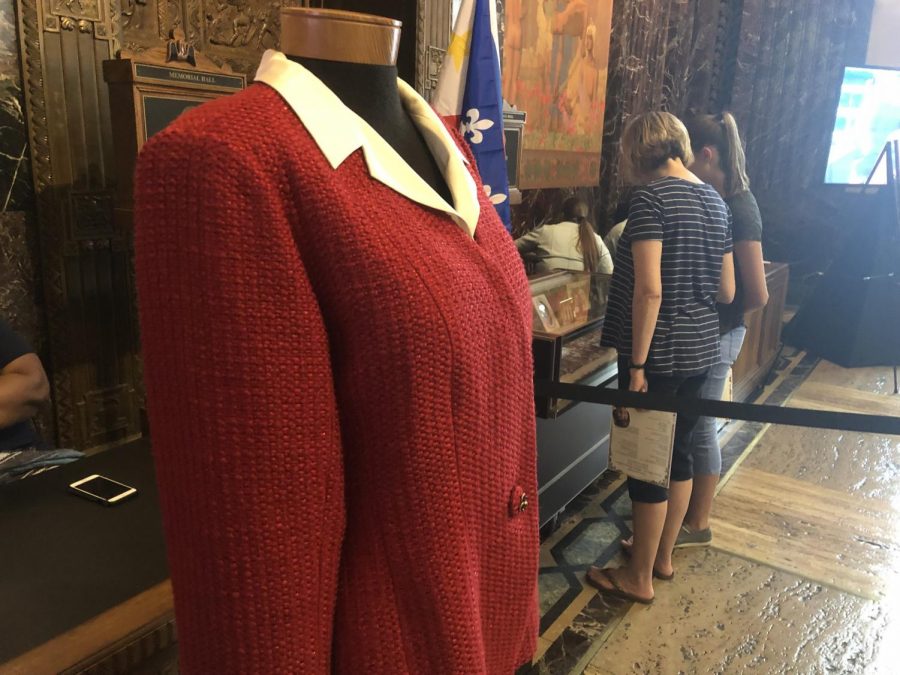 Kathleen Blanco's suit from her inauguration as Louisiana's first female governor was on display at the State Capitol on Aug. 22, 2019. Other items from her political career were also showcased to the public. Photo credit: Andres Fuentes

Even in her death, former Louisiana governor Kathleen Blanco is making history.

She is now the first woman to ever lie in the State Capitol and just the fourth governor to receive the honor.

Her body was on display for the public on Aug. 22.

Blanco was the state’s governor from 2004 through 2008 and is known for leading Louisiana through both Hurricane Katrina and Rita.

She passed away on Aug. 18 at the age of 76 after her battle with cancer. Back in 2017, she was diagnosed with ocular melanoma and accepted the fact that the disease could not be cured.

Personal items, photos and campaign materials were on display to commemorate her time in office and her achievements in politics.

“It was nicely done,” Maria J. Foster said. “”It was great to see those things to just kind of relive the things that she did. I really appreciated that they had that.”

Families flocked to the site to pay their respects and learn more about the politician that was known for her gentle heart.

“She built an entire reputation on being kind to others,” Leo Honeycutt said.

Honeycutt knew Blanco personally through her years in the Public Service Commission and Lieutenant Governor.

“She was the same wherever she was,” he said. “She was never unkind to anybody and that what was really her strength.”

Her nature and attitude while serving as a public figure touched many lives and her becoming Louisiana’s first female governor impacted the next generation.

“She was a role model to us all and proved that you can do anything,” Lynnel Ruckert said. “you can be governor, you can be a veterinarian, you can be an attorney, you can be a mother and make a difference in the world.”

Her policies and family values are what many Louisiana residents will remember most about her.

Danielle Klapinski said, “she championed children’s rights and led our state through a difficult time after Hurricane Katrina, so I think she absolutely represents all that women can be in politics.”

With her one term in the highest seat in Louisiana government, Blanco broke gender barriers that still resonate with the next generation.

St. Aloysius fourth graders Mary Kyle Ruckert and Kate Klapinski now feel that they have a future in politics.

When asked if she wants to run for governor, Klapinski said, I want to try.”

Ruckert has her eyes on something bigger.

She said, “I’m going to be president”