Review: Queen+Adam Lambert are the champions 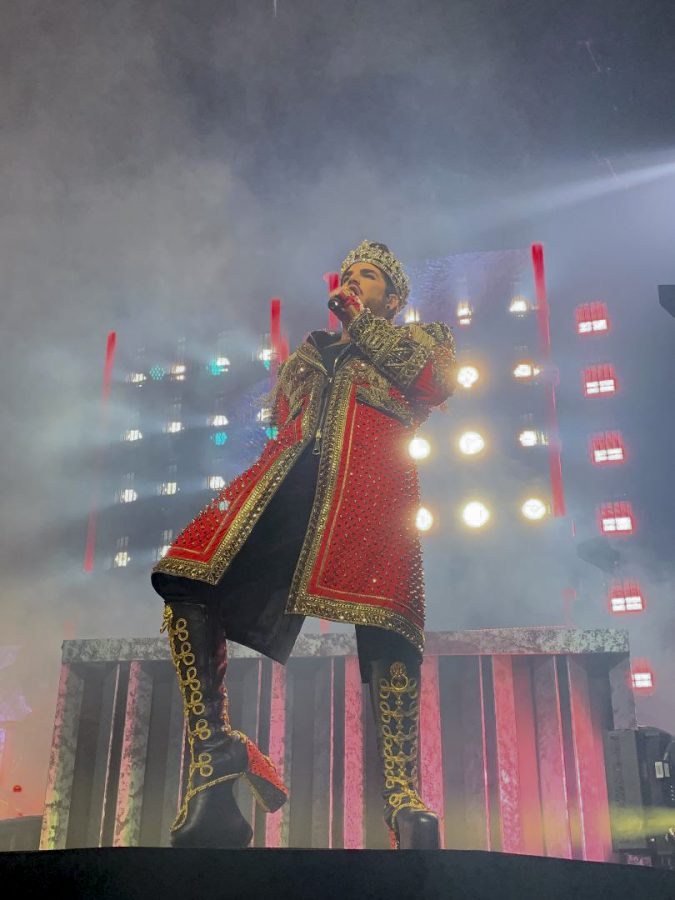 Adam Lambert sings "We Will Rock You" with Queen at the Smoothie King Center on Aug. 20. Lambert performed with the group as a part of their Rhapsody Tour. Courtesy of Heidi Dulom.

Thirty-nine years after the Jazz Tour and their last performance in New Orleans with Freddie Mercury, rock legends Brian May and Roger Taylor, accompanied by Adam Lambert, made a triumphant return to the city to play a concert again on the Rhapsody Tour.

Riding the wave of the “Bohemian Rhapsody” movie, Queen + Adam Lambert were sure to perform their entire set list from the Live Aid concert in 1985. Along with these hits, they also played other massive songs such as “Another One Bites The Dust” and “Somebody To Love.” However, the band gave nods to their devoted fans when performing lesser-known songs such as “Dragon Attack” and “Lap of the Gods.”

Personally, the concert was a mind-boggling experience. Queen being my favorite band growing up was difficult because Freddie Mercury is dead, and the rest of the band was borderline retired. It seemed as if they would never play live again. However, when the instrumental intro to “Innuendo” that started the concert began to play, a feeling of euphoria washed over me. By the end of the concert, my throat was ripped apart from singing and yelling, and my ears were ringing from the wall of sound that filled the stadium. When Brian May sang “Love of My Life” there were two screens behind him, one with May’s live footage, and one that had Freddie Mercury’s recorded footage. After the performance, Mercury’s footage gestured and bowed over to the screen May’s footage, where he returned the gesture and bow. Seeing such genuine feeling on stage from Brian May had me crying as soon as I saw it. Even though Freddie Mercury has been dead for 28 years, in that moment, it felt like he was there back on stage.

Though no one will ever replace Freddie Mercury, Adam Lambert brought a bombastic and flamboyant presence to the stage that both acknowledged Mercury’s memory and retained Lambert’s own style. Throughout the concert, he hit remarkable high notes that pierced through the thunderous cheers. Adam Lambert’s rendition of “Who Wants to Live Forever” and “The Show Must Go On” were particularly notable for the emotional energy that he funneled into the songs.

Brian May met all marks when playing the guitar, electric and acoustic, singing backup and singing solo. His guitar solos kept a lot of what exists on the recordings of the songs, but he also added tasteful flare to them. He had an extended guitar solo toward the last quarter of the concert that acknowledged his career as an astrophysicist with models of planets and a screen with stars to decorate the stage. Further, his performance of “Love of My Life” tied back to the performance from Rio de Janeiro in 1985 with the audience singing along.

Roger Taylor came in booming on both the drums and vocally. He sang “I’m In Love With My Car” himself, and later sang the first portion of “Doing Alright” as a duet with Brian May. He also performed David Bowie’s part in “Under Pressure.” At the end of the concert, everyone was cheering at Brian May and Adam Lambert who were on the catwalk. I turned around and cheered at Roger Taylor, who returned the cheer and pointed back at ME out of the many people in the front row. Overall, Taylor retained his youthful energy and was a large presence on stage.

Not only was the musical performance remarkable, the stage setup and choreography of the event was something to behold. The concert started with a large semi-circle curtain that was raised into a crown above the stage. Adam Lambert’s costumes were particularly notable, with his final outfit calling back to Freddie Mercury’s crown and cape costume. For “Bicycle Race,” Adam Lambert came up from below the stage lounging on a decorated motorcycle. Lambert also sang most of “Killer Queen” laying on top of the grand piano on stage.

Altogether, their performance was amazing. There was not a moment when Adam Lambert’s voice failed him. His mannerisms were great, and he owned the stage when he danced. Brian May always had something creative and talented to play on his guitar whenever he soloed. Roger Taylor played the drums with high energy and with a wide variety of percussive styles. Their harmonies, notably “Fat Bottomed Girls,” were sung with power and expertise. Overall, the concert was amazing.