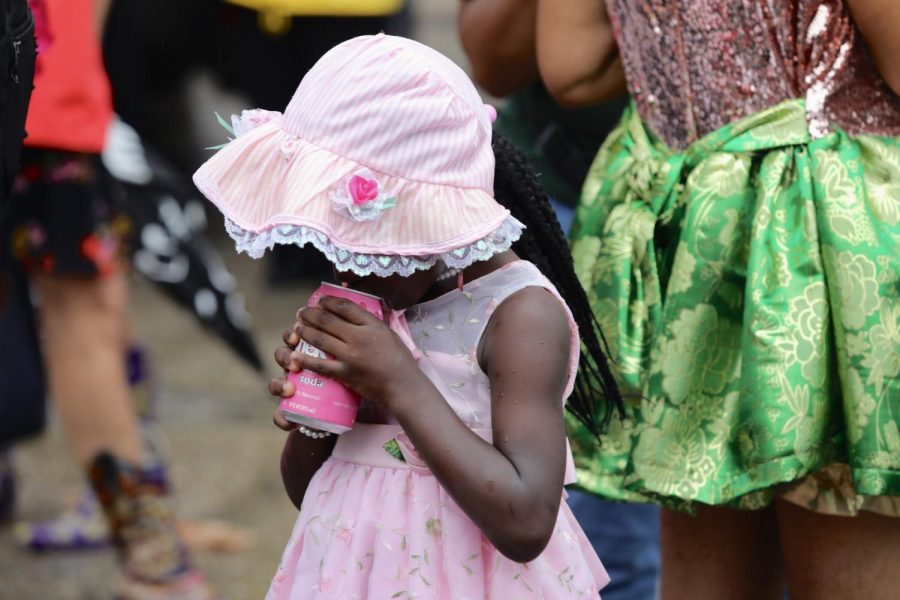 A baby doll cools down with a drink during Art Neville’s second line procession on July 30, 2019. Photo credit: Andres Fuentes

The Wolf: What’s it like to be a New Orleanian?

I’ve had the privilege of living in New Orleans all my life, and for that, I am grateful.

I’ve seen the city through crooked politicians, crippling storms and cursed football seasons, but it’s all worth it when the sun rises on the Crescent City.

It’s all worth it when you get to sit down to a crawfish boil ahead of a parade, buy the last praline king cake from the local bakery, find decent parking downtown or even just finding your car safe and dry on the neutral ground after a storm.

I’ve danced in second lines, cried at Saints games and dropped the occasional sno-ball, just like the rest of ’em.

As a local, there’s a certain rhythm in your step and song in your chest. It’s something unique in the muggy air that we breathe, but you don’t have to be born here to have that same joy in your soul.

Here is some advice for you if you’re looking to be fully immersed in New Orleans:

We live differently down here, if you couldn’t tell. We don’t really have winters and our summers linger longer than we would like.

Instead, we cut up our years in four different time frames: Parade Season, Sno-Ball Season, Hurricane Season and Football Season.

We start off our year among the harsh wind and humid cold, catching beads, coconuts, shoes and more for Parade Season. It’s what we do.

We come early to the parades, pressed up against the police barricades. We make sure we have drinks, bags for our throws and enough room to dance when the marching bands come through.

And just remember, catching throws is definitely a sport. It takes a while to master it.

Don’t wear every bead that you catch and you didn’t really go to Mardi Gras if you weren’t smacked with a bag of beads.

The parade season lasts a lot longer than just carnival, with parades for both St. Patrick and St. Joseph, and there’s a lot more to parades than the beads.

Marching bands, dance krewes, colorful floats, themes and fashion are all why the locals show up (and Zulu coconuts and Muses shoes).

Sno-Ball Season kicks off the warmer weather. Every trip to the sno-ball stand is a new color or a new flavor, but the classics will forever be wedding cake, root beer float and rainbow (this is up for debate).

We also chow down on seafood boils on Fridays, BBQs on the weekends and whatever food the vendors are serving at the festivals. Don’t be afraid to gain weight.

Be prepared, there will be a lot of festivals (most of them dedicated to food). Plan ahead and go to the ones that you think you will enjoy. Don’t wear yourself out trying to go to each one. We like to take our time, immerse ourselves in the sights and the sounds and you should too.

Hurricane Season is the scariest time of the year. In just a matter of days, a storm could swell in the Gulf of Mexico that could be big enough to flood us out.

Always have an evacuation plan. Be sure to stock up on water and non-perishable items. Medicine, cash and important documents also have to be handy in case of dangerous rains and winds.

Don’t be scared though. Hurricane after hurricane has tried to wipe out New Orleans, but either because Mother Nature enjoys our way of life or the heavens above want to see another Saints Super Bowl, the city has stood its ground for over 300 years.

In the event of a major storm, be sure to follow local media, whether through social media, TV coverage or other means. Don’t listen to the national news. They tend to exaggerate the weather conditions.

New Orleans is always proudly wearing their black and gold year round, but when the boys hit the field in the Dome, that’s when the city’s fans truly start to erupt.

I have been fortunate enough to witness the current Golden Era of the New Orleans Saints, with Hall of Famers breaking records, making the playoffs and winning a Super Bowl.

But, most locals went through decades of losing seasons and going to games with paper bags over their heads.

Football gave us hope after Hurricane Katrina. It was our way of telling the world that we have rebuilt, that we are still here.

So excuse some of us if we walk around like it’s still 2010.

Nonetheless, the Who Dat Nation is welcoming to all walks of life under a few conditions:

Live by those simple codes and you will always find a home at any sports bar, cookout or eatery.

There’s a lot more to New Orleans than I can describe. I can give as much advice as possible, but to truly live like a local, you need to just live. Stroll down the French Quarter, take the St. Charles streetcar, shop at the Riverwalk, eat in the Marigny or the Bywater and listen to the music on Frenchmen Street.