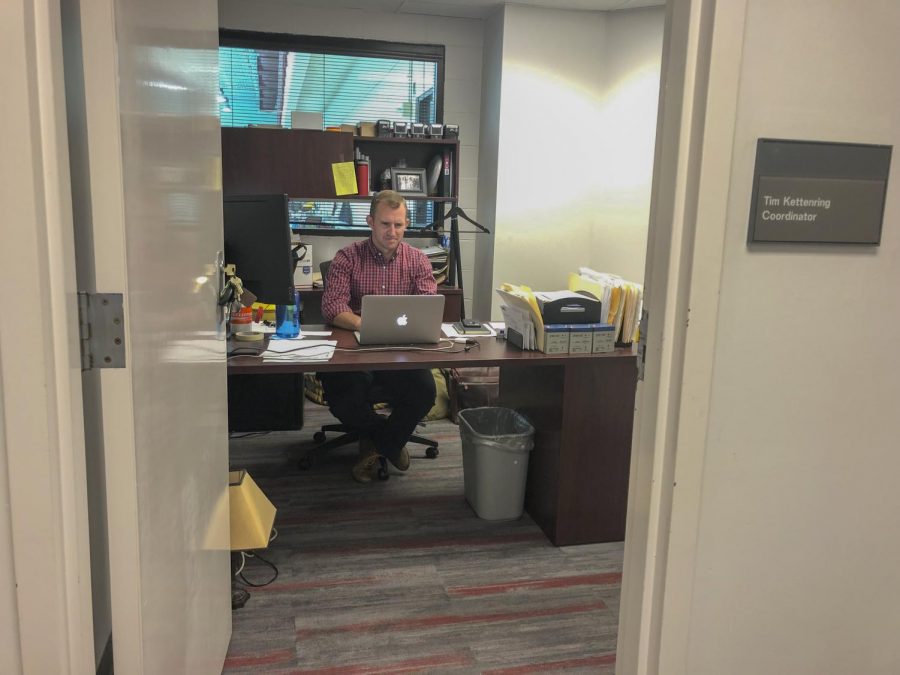 Tim Kettenring sit in his office in the Athletic Complex on Sept. 3. Loyola athletics is going through changes in its staff, leaving spaces open in the department.Macintoshes. Umpteen poisons ran away. Rae Walberg/The Maroon Photo credit: Raegan Walberg

Loyola’s status as serving as a launch pad for future athletic careers is evident in former Athletic Department employees Courtnie Prather and Michael Swartz. And this is one reason why Brett Simpson, said he is proud to be the senior head of the Athletic Department.

But as the department says goodbye to two familiar faces, the search is on to fill both positions.

Prather joined the Wolf Pack July 2016, coming from Southern University in Baton Rouge, ambitious and devoted not only to her job as the assistant director of athletics but as part of the Loyola community, according to Simpson.

Throughout her time, she became a prominent figure, involving herself in numerous on-campus committees and advising the Wolf Pack on topics such as Title IX and the LBGTQ community. Within her department, Prather led the internal affairs, overlooking the daily operation of the University Sports Complex and game-day activities.

After 2 1/2 years with the Wolf Pack, Prather left this summer for a position at UC Santa Cruz as the assistant director of athletics and senior woman administrator.

Likewise, Swartz, former communications director, came to Loyola in Dec. 2017 from The University of Washington. As a seasoned media manager, holding both a masters in Intercollegiate Athletic Leadership and Administration as well as prior experience with the Seattle Mariners, Swartz said he modernized Loyola Athletics communication.

“I oversaw everything that went on with our website, from updating student-athlete bios, to writing all of our game recaps and releases,” Swartz said. “I also ran our athletics social media accounts and created or managed all content that went on there like the graphics and videos.”

This summer, Swartz accepted an opportunity at Carthage College as the assistantathletic director of communication that he said he couldn’t turn down.

While these individuals were integral members of the Wolf Pack, Simpson said he is excited to see how their careers unfold.

“We take great pride in growing our staff, helping them achieve their professional goals and dreams,” he said. “We have a couple who are working in some really prestigious places: Notre Dame, Cal and LSU.”