Saints fans kick off the season with a run 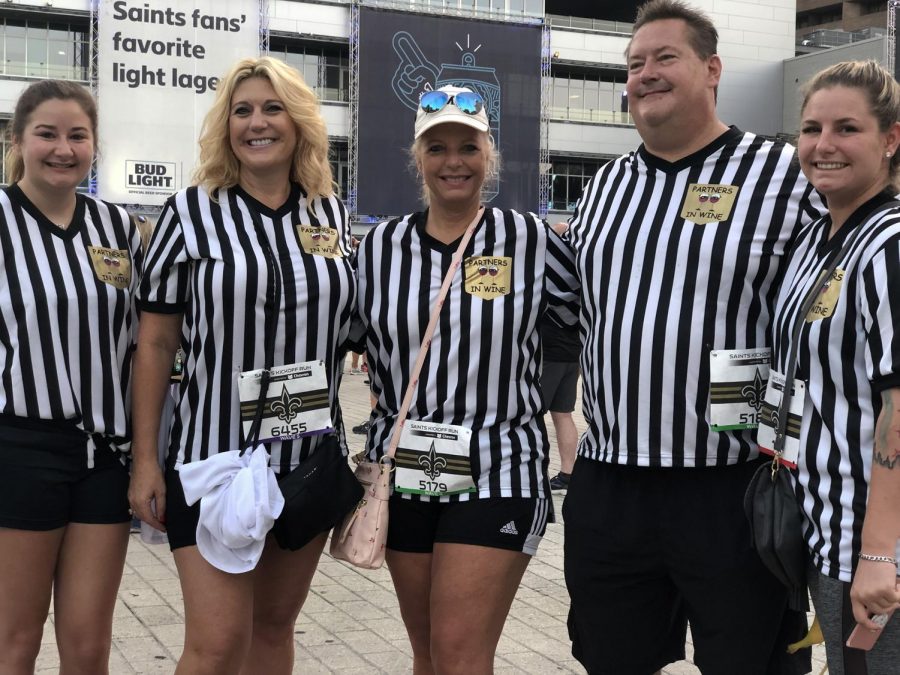 Since last season’s controversial ending, the Who Dat Nation has been clamoring for the return of football, and over the weekend, New Orleans Saints fans channeled that energy into the Saints Kickoff Run downtown.

According to Len Gee, event coordinator at Easy Day Sports who helped create the run, the Saints Kickoff Run was designed to have the fans’ excitement for the upcoming season at the forefront and be the main driver for the event.

“It is a way for fans to come out and show support for the team and enjoy a fun, family friendly atmosphere,” said Gee.

The run celebrated its eight year anniversary on Saturday, Sept. 7. The 5k run started at the 50 yard line in the Mercedes-Benz Superdome and snaked through Sugar Bowl Dr., down Poydras St., turned onto Tchoupitoulas St., down to N Peters St. and turning all the way back around just before Decatur, down to Poydras St. and finishing in Champions Square.

The fans showed up in droves breaking the record for most attendees ever at the Saints Kickoff Run with over 7,000 participants this year. According to Gee, this new record is just more proof that shows how passionate and connected Saints fans are with their team.

“My opinion is that people who are fans of football like to identify with their team so being able to participate in an event in a facility that houses their team is a very special thing,” said Gee, “I also think people like to be around others that share their interests so having a run that is geared towards kicking off a season for their team is a solid place to connect with others with shared interests.”

Members of the Who Dat Nation came from all over the country to show their support for their favorite team, like Jennifer Dutchover from neighboring Biloxi, Mississippi and even as far as Chicago, Illinois like Kim Koplin, both of whom came dressed in New Orleanians’ new favorite costume: a referee. This year’s Saints Kickoff Run was also both Dutchover’s and Koplin’s first time participating in the run.

Other, more experienced, runners like Gwen Armstrong, have been participating in the Saints Kickoff Run for four years now and believes that the Kickoff Run has been a great way to celebrate the start of the Saints football season.

“[A friend and I] look forward to [the Saints Kickoff Run] every year,” said Armstrong, “it’s like a little tradition that we’ve started.”

Armstrong’s experience meeting fellow Saints fans and how the Saints Kickoff Run “is just really fun” has rubbed off on to two of her friends, Melissa Buque and Laurie Talbot, contributing to the event’s record-breaking growth.

“We always see the fun they are having so we said this year we are coming too,” said Talbot.

The Saints Kickoff Run has also allowed some fans such as Chase Miller to not only cheer on the Saints, but to also promote a good cause.

Miller is a member of a group called Ainsley’s Angels, an organization which pairs able-bodied runners with people with mental and physical disabilities and pushes them in bright pink, custom wheelchairs through races. Ainsley’s Angels aims to promote inclusion throughout all aspects of life and campaigns through races like the Saints Kickoff Run.

“We get to kick off the Saints season and knowing that we get to run this year, especially being here with Ainsley’s Angels it’s really cool to celebrate inclusion and that the Saints are a part of that is pretty awesome,” Miller said.

The starting line for the race was on the 50-yard line inside the Superdome and participants were greeted with a brass brand and Saints owner Gayle Benson cheering the runners along, while also taking the occasional selfie with fans. Benson was also accompanied by Saints legends Deuce McCallister and Jim Mora.

“It was just so exciting to be here,” said Benson, “It’s very humbling that they would want to [take pictures], that they recognized me.”

Following the main 5k race, a Kid Fun Run was held for children 12 and under and led by Saints mascot, Gumbo. Proceeds from the Saints Kickoff Run were given to the New Orleans Young Leadership Council as well as the New Orleans Mission.