Saints fans make the best out of Revenge Bowl 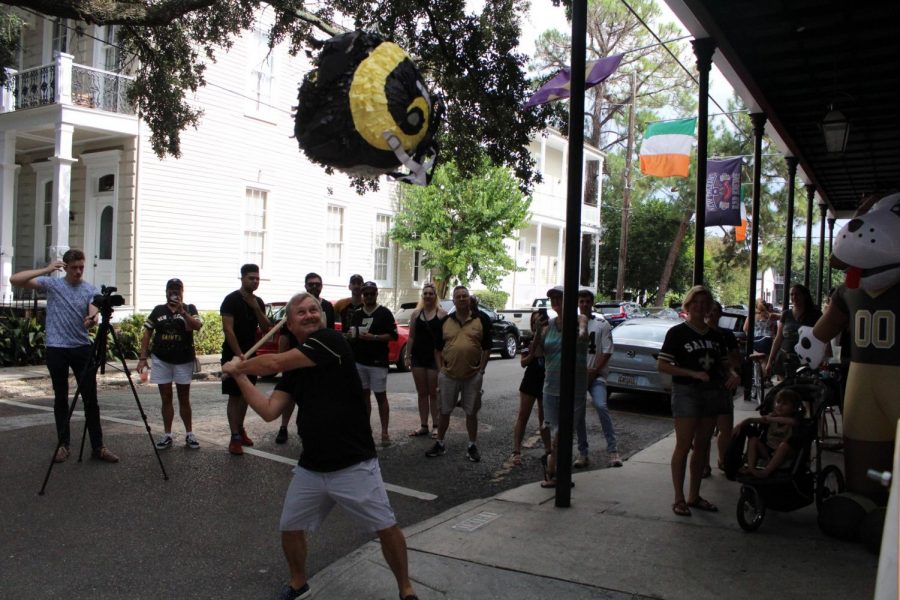 Fans line up to crack open a L.A. Rams pinata ahead of the Saints vs. Rams game on September 15, 2019. Saints fans did their best to release their frustration before the game. Photo credit: Andres Fuentes

On a muggy afternoon, it wasn’t the lack of seating, the Louisiana heat or even the long wait time for a po’boy that had Steven Polk fuming.

His anger had been boiling deep within him since January and he had been looking for an excuse to let it out.

So when it was his turn at bat, he gripped the wooden pole and landed a strike right at the back of the Los Angles Rams papier-mâché helmet, sending candies, shirts and other goodies on the ground.

“I channeled all the energy from just being done dirty last year,” Polk said.

He joins a long list of New Orleans Saints fans who were frustrated from the No-Call play in last year’s NFC Championship game. The Crescent City missed out on the Super Bowl that day and the patrons of Tracy’s wanted revenge.

“I hope we run the score on them,” Polk said just minutes before kickoff. But little did he know that his team would not put up a good fight, that another call was missed by the officials and quarterback Drew Brees would have to undergo surgery.

Little did they all know.

It was standing room only at the Irish Channel bar as the sports hot-spot hosted “Revenge Bowl.” The Cha Wa Mardi Gras Indian band was playing music for the soul, employees were handing out yellow flags and everyone was decked out in black and gold.

It’s almost kick off and @TraceysNola is getting into the right mood. The Irish Channel pub is hosting Revenge Bowl ahead of the Saints vs. Rams game. @WWLTV pic.twitter.com/gegdc14svt

It was perfect atmosphere hours before the game, but nothing but anger and silence as the fans saw their beloved team lose to their arch rivals, 27-9.

“This is personal,” Ryan Hancock, one of Tracey’s deliverymen, said. “When you hurt the Saints, you hurt the city. This is our family. It’s that kind of kinship.”

The fans may have not been able to witness a victory, but the beer kept flowing, the fries kept coming and the patrons tried to make the best of it.

“We’re not crying,” owner Jeffery Carreras said. “All the Who Dat Nation comes together and likes to drink together. Hopefully we can put this all behind us and rock and roll the rest of the year.”

The bar tried to return to status quo but the sting of defeat still lingered in the air. However, Gus Kattengell, the host of ESPN Radio’s The Sports Hangover, believes that the fans should focus on the games to come, rather than their Week 2 matchup.

“We got plenty of time to get back to Miami,” he said when asked about whether the black and gold will appear in this year’s Super Bowl.

But whether you’re optimistic or not, with a 2019 schedule filled with marquee games with heated rivals, Tracy’s is prepared to host another round of Saints festivities.

General manager Jacob April said, “It all depends on what game it is and how much we hate the other team.”