History resonates throughout the oldest bars in New Orleans 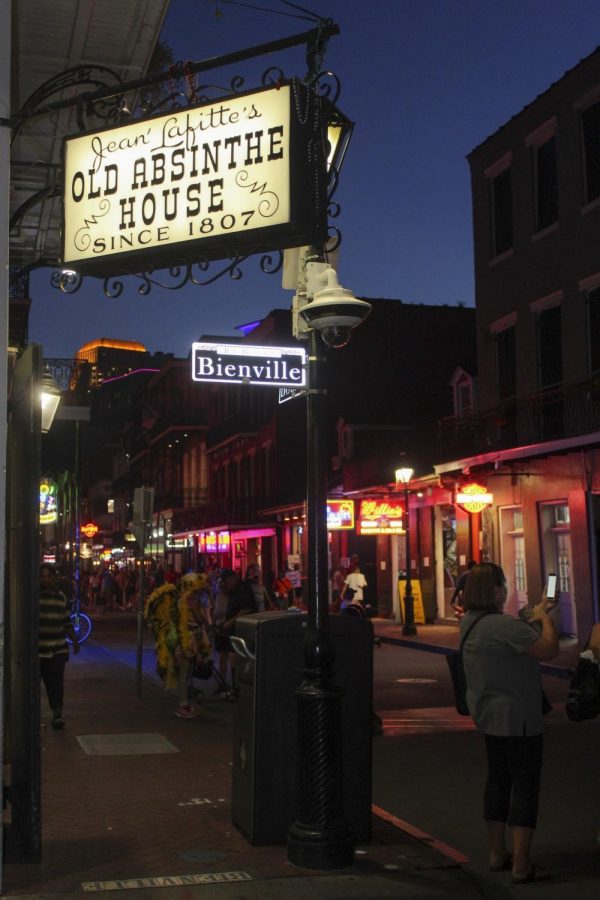 The outside of The Old Absinthe House bustles on the corner of Bienville Street and Bourbon Street on Sept. 10. The bar is among the oldest bars in the city. Photo credit: Gabriella Killett

While stumbling up and down Bourbon Street, the stereotypical New Orleans barhopper with a hand grenade in one hand and a daiquiri in the other, is unlikely to consider the history that is staring them in the face.

But barhopping in New Orleans can include sitting on the same bar stool as Andrew Jackson, Jean Lafitte, or even Lee Harvey Oswald.

Napoleon House, Tujague’s, Henry’s Uptown Bar, the Old Absinthe House,and Lafitte’s Blacksmith Bar are nightlife establishments in New Orleans that lead any visitor to be in the presence of celebrated history.

Napoleon House, built in 1812, was built to house Napoleon Bonaparte, according to Lewis Smith, bar manager. Girod, the mayor of New Orleans at the time was a French aristocrat and admirer of Napoleon. When Girod found out that Napoleon was exiled on the island of St. Helena off the African coast after losing the Battle of Brussels, he conspired with the the local pirate Jean Lafitte to break him out of incarceration. Unfortunately, Napoleon died before he could be freed and before the infamous leader could ever stay at the house built for him.

Upon immigrating to New Orleans, an Italian family, the Impastatos, bought the property from Girod and converted it into a functional establishment until 2015 when Napoleon House was purchased by The Ralph Brennan Restaurant Group, a restaurant management company based in New Orleans.

But despite the changes in ownership, Smith said the bar’s long-standing history is still a integral part of its identity.

“It’s iconic,” said Smith. “We haven’t changed much of anything from way back when. What you see is what you get.”

This commitment to tradition continues even onto the bar’s menu. Napolean House is best know for The Pimm’s Cup, a gin-based drink, invented to appeal to clientele that would stay at Napoleon House for hours and need something with a low alcohol content.

As America’s oldest stand-up bar, Tujague’s adds to New Orleans culture with the richness of its history.

The mirror that stands behind the bar is older than the United States, according to Nancy Weinstock, sales and marketing coordinator at Latter Hospitality, Tujague’s parent company. And the bar is credited with the invention of the alarmingly green but classic Southern dessert drink.

“Philip Guichet, son of the owner at the time, invented the Grasshopper cocktail for a competition in New York City in 1918,” said Weinstock. “Although this cocktail, made with creme de menthe, creme de cacao, brandy and heavy cream, placed second in the prestigious competition, it has remained a winner at Tujague’s ever since.”

Tujague’s is and has always been a neighborhood restaurant, according to Weinstock, and this identity is a universal theme throughout all token New Orleans bars.

It’s a neighborhood atmosphere,” Nell Boyle, owner of Henry’s Uptown Bar, said. She, along with her brother Stephen Gogreve, are the fourth generation in their family to own Henry’s.

The bar, once named Crone’s Bar, after their mother’s maiden name, is now named after their father, Henry Gogreve, who is known for kicking Lee Harvey Oswald, the man who assassinated President John F. Kennedy, out of his bar in the 1960s.

According to Boyle and Gogreve, after handing out pro-Cuba pamphlets downtown, Oswald was arrested. Once he was released from jail, knowing that Henry’s had a television inside, he ran there to see himself on the news before their father threw him out onto the street.

But the bar’s connection to American history goes even beyond his encounter with the infamous assassin.

Henry Gogreve was one of the founding members of the Mardi Gras Krewe of Thoth in 1947. Henry’s still hosts the king’s party before the parade and toasts both the king and queen on the day of the event each year.

The Old Absinthe House is another one of New Orleans’ token establishments, founded in 1806 by immigrants from Barcelona. Initially operating as a warehouse for goods, the bar has since developed into a prosperous place, known for its extensive history and for inventing the “Absinthe Frappé.”

Absinthe was banned in the United States in 1912 but The Old Absinthe House was, however, able to serve herbsaint, an anise-flavored liqueur, in place of absinthe during its ban, according to Marissa Alberts, director of events and special projects for the Bourbon Saloon, the bar’s parent company.

But a big part of the bar’s history includes the claim that The Old Absinthe House is where Jean Lafitte and Andrew Jackson met.

Lafitte’s Blacksmith Shop Bar, older than all bars previously mentioned, carries on the trend of authenticity. Lafitte’s was built between 1722 and 1732 by Nicolas Touze, according to Lafitte’s customer handout. The building is known to have been later owned and managed by Jean and Pierre Lafitte, as a base for their smuggling operation.

“Lafitte (Jean) led a colorful and mysterious life in the new world,” according to the handout.

Laffite’s Blacksmith Shop Bar, in addition to the aforementioned establishments, assisted in the development of New Orleans culture as we know it.

Next time, in place of toting around with a daiquiri and a hand grenade, try out a Pimm’s Cup or a Grasshopper and stop into places where history is at your fingertips. Take a sip, and take New Orleans in from a different perspective.